Leaning on God in the Midst of Life’s Great Difficulties 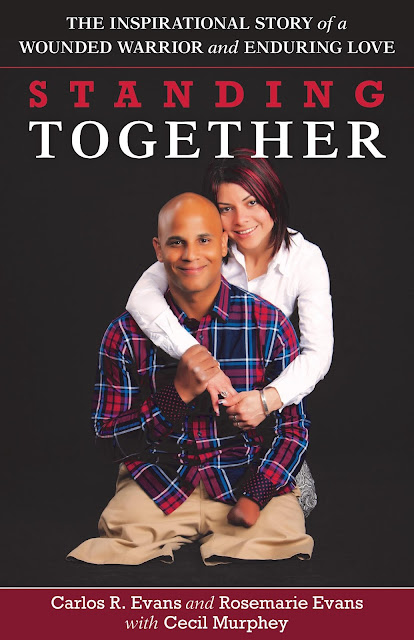 Carlos and Rosemarie Evans share their
inspiring story of standing together

Sustaining a military marriage is hard work, especially when deployments keep a family separated for prolonged periods of time. The strain is intensified when the serving spouse is injured in the field. According to the PTSD Foundation of America, an estimated two out of three marriages fail for troops suffering from combat trauma. Carlos R. Evans and Rosemarie Evans are well aware of the difficulties, having experienced them personally. In Standing Together: The Inspirational Story of a Wounded Warrior and Enduring Love (written with Cecil Murphey/ Kregel Publications/June 25, 2019/ISBN: 9780825444975/$17.99), they share their inspirational story of facing severe injury, rehabilitation, post-traumatic stress disorder and addiction. Theirs is a true story of hope and courage in the face of astonishing challenges.

Carlos Evans grew up in a family where many of his family members had served in the military over the years. Like many others, after 9/11, Carlos had a deep yearning to do his part to serve his country, so in 2004, he joined the Marine Corps. “During my deployments, I don’t think I ever considered that anything was going to happen to me. I personally knew others who had died and some who were badly wounded, but as a Christian, I figured God was with me and would protect me from every kind of harm. On my various furloughs, I said to friends and family members, ‘I’m not going to die in Iraq or Afghanistan. God has a bigger purpose for my life,’” he shares.

However, during his fourth deployment, on May 16, 2010, Carlos stepped on an IED. As a result, he lost use of both legs and his left hand. As his fellow Marines attended to him outside of camp in Afghanistan, Carlos’ fight for his life was just beginning. For the next two years, he and his wife, Rosemarie, went through the rehabilitation process together. As a nurse and mother of two young children, Rosemarie was used to caring for people, but the task of taking care of her triple-amputee husband brought new challenges every day.

“I had the knowledge of what should I expect to see when I met Carlos at the hospital. Being a nurse helped me understand procedures and prognosis, but I felt the same uncertainty, desperation, sadness and helplessness any other family member feels when a love one is going through a difficult time,” explains Rosemarie. “Before leaving to go to Afghanistan, Carlos and I talked about what should I expect if I saw the Marines at the front door, but we never talked about him coming back home seriously injured. We didn’t expect that and weren’t aware of how many service members were injured in the war. When I stepped into Bethesda Hospital, it was eye opening to see how many wounded service members came back and how many families were affected.”

At first, family and friends needed to take care of Carlos and Rosemarie’s two young daughters, and Rosemarie felt pulled between her responsibilities as a wife and mother. She knew they needed to come together to face their new normal as a family of four as quickly as possible. In addition to his limb loss, Carlos faced PTSD and developed an addiction to painkillers. He was sure Rosemarie’s life would be better without him—and that it might have been better if he hadn’t survived at all. But unlike the majority of marriages put under similar strain, Carlos and Rosemarie stayed together. With the help of family, friends, and—most importantly—a strong faith, they’ve built a solid marriage and discovered a ministry they never expected.

By the hand of God, their story, which began in devastation, has turned into one that draws in and lifts up more people than
either of them would ever have dreamed. Not only will disabled veterans and their loved ones find help in reading Standing Together, Carlos and Rosemarie’s captivating journey also speaks to those who long for stronger marriages, care for loved ones with disabilities, or are facing a new normal in their own lives, small or large. It is a powerful resource for leaning on God in the midst of life’s great difficulties—and for finding ways that, through faith, profound loss can bring incredible blessing.

“One day I was trying to put on my prosthetic hand and legs. I was struggling and getting frustrated. I wanted to look like I used to,” writes Carlos. “I believe the Holy Spirit touched my heart, and I received this message: ‘I am touching more people with one hand then when I had two. Today, I am leaving more footprints than when I had feet because all you need to touch someone is heart.’”

“This is a tremendous story of resilience and hope. Carlos and Rosemarie Evans tell a powerful personal account of overcoming trauma and tragedy. In so doing, they give hope to all who have experienced and are experiencing the wounds of war.”
~ Timothy J. Demy, ThD, PhD, professor of military ethics, US Naval War College, and retired chaplain, US Navy

“Carlos and Rosemarie will bring you to tears—and cheers—with their frank story of hardship—and victory—after major trauma. Their vivid narrative of tough times, tough love, and God’s grace shows the way through both terrible circumstances and struggles of the soul. They don’t give you a feelgood formula or how-to tale. They do share how they beat the odds against survival and recovery by leaning on God and all the good people in their lives. You don’t have to love God or love marines to be enriched here, but you cannot read their story without coming to love Carlos and Rosemarie and being grateful for this time spent with them. You’ll learn from them that with Christ all things are possible!”
~ Mark A. Jumper, PhD, director of Chaplaincy & Military Affairs and assistant professor, Regent Univ. School of Divinity