Ok, the gifts have been unwrapped, it is time to dismantle the trees and move on to other things. 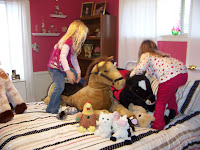 What kind of rubs me the wrong way is that for the last few days is that I have been crocheting until I got cramps in neck and my fingers were stiff in order to finish the BaqBaq blanket I had been working on for Layton. The obsessive-compulsive in me decided it had to be done last minute. And everyone showed up at my parents house when I was 5 minutes away from having it done.
So after everyone got there, the two youngest girls screamed like crazy for the HUGE stuffed horses I got them, I snuck back to finish the last few stitches to complete the blanket. I folded it, took it to the living room, but it under the tree, and Paige pointed it out when Julie walked back in from her car. Paige says, "this is Layton's present from Audra." Julie says, "Oh, that's pretty," literally looking at it maybe two seconds before stuffing it in a sack with some other stuff next to the couch. I said, "I just finished it two minutes ago." 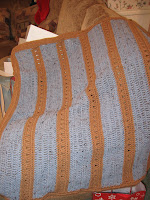 I did take it out of the sack to take a photo of it and show Mom from across the room that I had finished it. I said, "I have to take a picture because I said on my blog I would."

I'm reminding myself that approval is nice to have, but no one owes it to me. I don't have to let approval or acceptance or appreciation be an idol. I'm not mad about it, and I'm not saying that no one liked it, I just expected a little more reaction.

I really need to end this post now. Those three Christmas trees that I put up for some unknown reason aren't taking down themselves. My goal is to have them down tonight!
Posted by Audra Jennings at 7:58 PM

Email ThisBlogThis!Share to TwitterShare to FacebookShare to Pinterest
Labels: Christmas

Well, I think it is a very lovely blankie. For what it's worth...