I've had enough of Four Christmases

Contrary to what has been said about me before, I do not hate all movies. I just don't go to the movies a lot - it's just not my passion like it is some people's. I maybe go a few times a year. In the past 4 weeks, I've gone twice and seen the same movie twice.
The day after Thanksgiving, I met up with my friend Rakia and we saw Four Christmases because it looked funny. It was. The first time. I forgot how utterly annoying Vince Vaughn became by the end of the movie.
Well, our somewhat more recent tradition (for my parents and I) is to go watch a movie in Waxahachie and out to eat on Christmas Eve. The choice of movies was slim, and my parents had already decided they wanted to see Four Christmases. They had forgotten that I had already seen it. That was fine, no problem, I would see it again without complaint.
Man, I tell you, Vince was annoying from the get go this time.
On this Christmas Eve, I am also rushing to crochet what may or may not be a Christmas gift for my (step)nephew. Every child needs a BaqBaq blanket, I suppose. Back in October when I was on vacation and started it, I intended to get it done in time. Then, I threw it in the basket for two months and didn't pick it up. The only fortunate thing about having Christmas on Saturday or Sunday is that I have more than a snowball's chance in ____ of getting it done in time. Possibly a snowball's chance in Texas.
Wish me luck!
The pictures below are the BaqBaq blankets I finished just in the nick of time last Christmas for Paige (purple) and Peyton (yes, her favorite color is orange and the color permanently burnt my retinas). Maybe Madison will get one for Valentine's... 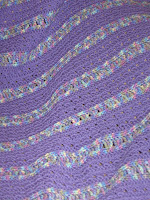 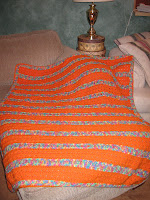