What's the most off the wall last minute item you've tried to shop for? 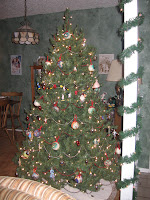 When I was in jr. high/high school, my parents own a sports store, and part of the annual tradition was working on Christmas Eve until sometime into the afternoon. Every year, we continued to be stumped about the "big ticket" item that customers were looking for in Corsicana, and why on God's green earth they would wait until Christmas Eve to look for it.

I'm talking about people looking for snow skis. Uh, Thrill Hill isn't exactly something to ski down, and uh, then there's the whole snow issue. I wish I could remember what some of the other things were, but they were always pretty significant gifts that you really weren't likely to find unless you were in a specialty shop in Dallas or something.

So, my question to you is, what have you desparately searched for at the last minute? Or maybe it wasn't even last minute. What is the one gift that you almost drove yourself crazy trying to find?

It must have been three years ago, I for some reason got obsessed with trying to locate a Spirograph because I was just absolutely convinced that Paige would enjoy it. I had one when I was young, but I don't know what happened to it. I did online searches, etc. and had to buy pieces at a time off of eBay because I did not realize how rare yet valuable Spirographs were. I say pieces because I couldn't afford a complete set off eBay. I'm telling you the online bidding wars were insane! I literally got a ziplock sandwich bag of most, but not all a set. I bought a newer almost full set (not near as good the original pieces) as well as a few more newer pieces in another auction. I was obsessed, I'm telling you.

I kept the random pieces for myself, and just last month, Paige wanted to get it out and spirograph. Guess what I found at Target this year... It's certainly less sophisticated than the original, but it is actually a full set at least. I haven't told her about my blog yet, so this shouldn't ruin her Christmas present.

So back to my question, what have you been frantic to find as a gift and who was it for?
Posted by Audra Jennings at 7:09 AM

Email ThisBlogThis!Share to TwitterShare to FacebookShare to Pinterest
Labels: Christmas