Maybe reminiscing about past Christmases will get me in some sort of positive holiday mood, because I'm just not into it right now.

There was a point and time when Grandmother would always read a poem or some story before we opened our Christmas gifts. This went on for a few years in a row, and we all were just not into it. So, one year, my mom and ex-Uncle Alan hid the book that Grandmother was going to read from. After they made her cry, we never had a Christmas reading again. 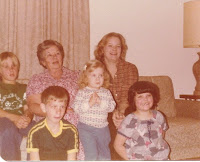 Every year at Nanny's house, we ate on Christmas Eve at the same time and everyone always brought the same dish. Everyone lived nearby except for Aunt Linda's family, and they were always there in plenty of time. Because there were so many of us, and we all brought our own cars for some reason (even all the grandchildren as the years went by), there would be at least 15 cars parked out by the house. All that to say that you didn't necessarily come with all your family when you came, but everyone was there by time to eat. Everyone except ex-Aunt Sherry. I don't know that anyone ever ate the broccoli and rice casserole over the years because it was never there on time.

We always sang every year at Nanny's house even though there was only one good singer in the family (and Melissa was adopted - we pointed that out every year too). I can't hear one certain version of White Christmas on the radio without thinking of ex-Uncle Wyn's rendition of the song. He wasn't a terrible singer, but he had a distinctive way of singing "Five Goooollllldddeenn Rings" which was his part of the 12 days of Christmas each year. The song never was quite the same after he and Carol divorced.

Speaking of singing, Melissa's best friend Todd (the Todd from Two Doors Down) would come and sing. I never could quite figure out why Todd came to our family Christmas. I couldn't figure out why any of the visitors that would pop by would come. We were sort of a peculiar bunch to hang with if we weren't your family.

For some reason, even though are rooms were right next to each other, I remember a few Christmas' when my brother decided he just had to sleep in my room on Christmas Eve. I had this foam fold out couch in my room, and that was his place to be on Christmas Eve. I'm not talking about when he was 4-5, I'm talking about when he was 11-12. He would drive me nuts talking until I'd have to tell him to shut up and go to sleep. One year, we seriously got up at 3:00 or 4:00 in the morning and had to see if Santa had come (um...let's just say we were old enough to...). We got up, hooked up the Nintendo (this is the year of the original with Super Mario 1 and Duck Hunt), then went back to sleep. I remember him doing that another year too when he wanted to know if he got a certain baseball bat.

I remember one year at Nanny's standing in the kitchen talking to Mark, and then we both got up and left the room. About 5 minutes later, Aunts Linda, Carol and Kay were all screaming. "WESLEY, come in here and get this mouse out of here." The trap had gone off 18 inches away from where Mark and I had just been talking.

For some reason, we all remember the year when Josh was like 5 and had an earache so we all had to spend an almost silent evening at Nanny's.

Or we joke Hunter about the year he fell out of the high chair at Grandmother's (because the four oldest grandchildren are 8-16 years older than him and that's just what we do).

Ohhhh... I almost forgot. There was the Christmas when I was about 19. I was the 5th of 10 grandchildren on one side of the family. Only the two oldest grandchildren were ever gifted enough to join the "adult table". (That's because the table already had about 14 people packed around it and you had to sit on everything from the piano bench to an old vanity stool to the stool that Nanny kept her phone on because there weren't enough chairs.) Anyway, the other 8 of us were in the living room at the card tables (because we couldn't all fit around the kitchen table that served as the children's table anymore). The point of this story is that I distinctly remember several of my cousins discussing the times that they had almost been caught by the police or sheriff's department for having illegal firearms and hunting guns in their trucks. (No, I have an Uncle Jeff, but his last name is not Foxworthy, and he's on the other side of the family.)

(In case you were wondering by all the ex- references, evidently we have several ghosts from Christmas past in our family.)
Posted by Audra Jennings at 11:48 AM