Evidently, I disappointed one of my readers by not making a personal post yesterday. You know, the plethora of readers that I have... Well, the people pleaser that I am... I'll blog for you Penny!

I'm going to try my best to write a humorous post tonight, but I have to admit my heart is totally in it. I was in a really lousy mood earlier and then I got downright mad about something else later on. That was about 4 hours ago, and I've cooled off somewhat. Bear with me a minute, and I'll get to the funny. 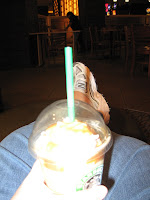 I don't often make plans for myself, but I had been looking forward to tomorrow morning. I was going to get my attitude adjusted in more ways than one since I had been in a pretty crummy mood for several days. The Barnes & Noble and Starbucks gift cards have been burning a hole in my new wallet. Since you have to go a certain distance away from Corsicana in order to use both, I was all ramped up to go buy some books that had been on my list and get a caramel frappachino. Sometimes it takes so little to make my day.

Well, something came up and threw my plans to go book shopping and frappachino sipping off until next week. I was mad at myself for building up my plans and setting myself up for disappointment because the truth is, the only person that can make you mad is yourself. It takes so little to make my day, and so little to make me disappointed. That's something I'm trying to work on among other things these days.

So, I tell myself, it will be OK. I'll be able to take Paige to the movies and get her back home in time for whatever plans Brian has for her for New Year's Eve. I wanted to leave my evening open for a potential last minute plan to ring in the New Year vs. the rarity of actually going to bed before midnight because I have a bad attitude about NYE and decided to sleep through the dropping of the ball. Jenny had a possibility bubbling that was probably going to fizzle out, or I was probably going to fizzle on her, but there was that possibility.

I had wanted to take Paige to Despereaux, but she wants to see Bedtime Stories. Just so you know, I think any movie that stars a former member of SNL falls in the category of stupid, with very few exceptions. However, it will be great because Paige and I will have our special time together.

About 30 minutes after I had called Brian to set up a time to meet him to get Paige, she called me back and said, "after we go to the movies tomorrow, we're going to spend the night at your house!" Almost speechless, I answer, "Ooooh? And who all is we?"

Brian does call back about 60 seconds after I hang up with her and asks, "you aren't doing anything tomorrow night were you? Peyton may actually want to stay at Mom and Dad's."

The honest to goodness truth is that I had no plans for tomorrow night. I was trying to be optimistic, but the truth is, I am a realist. My problem is (and believe it or not, I have a hard time time asserting it) that I hate to be told. I want to be asked.

Then, I just got really mad (again at myself) that I did speak up and say, "that's fine, they can come over without a problem, but next time, it would be nice if you planned ahead a little."

Ok, so now that I have that frustration poured out for all the world to see, I'll get this posted and start to work on the funny.
Posted by Audra Jennings at 10:35 PM