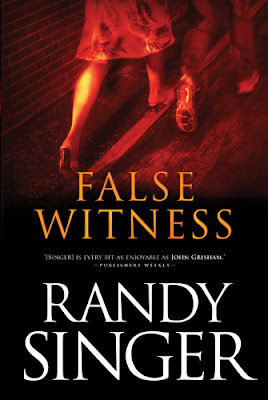 The Government Can Change an Identity,
but It Cannot Change a Life
Suspense author Randy Singer brings
awareness to the plight of Dalits in India
What is our responsibility for obtaining justice for those in need? Does the end always justify the means? Randy Singer examines these questions while taking his readers through twists and turns on a powerful journey in his novel False Witness. This engrossing legal thriller is a re-telling of Singer’s original novel by the same name. The new version has many substantial changes—some designed to bring about Singer’s original vision for the book inspired by his friend’s funeral.
The deceased was David O’Malley, Singer’s good friend and former client. O’Malley’s wife had asked Singer to give her husband’s eulogy. So, at the funeral, Singer talked about his friend’s generosity and big heart. Everyone there had a David O’Malley story, so heads nodded as he shared his. David’s pastor followed Singer in the pulpit. He spoke about a man named Thomas Kelly. The man was a scoundrel involved in organized crime. He turned on everyone he knew. “You don’t think you know Thomas Kelly, but you do,” the pastor explained. “David O’Malley was Thomas Kelly before he went into the witness protection program—before he came to the Lord.”
Prior to that moment, the only people that knew about David’s past were the government, his family, Singer, and his pastor. There was utter silence as the pastor concluded with a line Singer said he will never forget. “The government can give you a new identity,” he said, “but only Christ can change your life.” It was then that he decided to write this book.

But Singer also wanted to draw attention to one of his passions. He wanted to highlight the challenges of today’s church in India. He believes that most Western Christians are unaware of the persecution of the church and the miraculous things happening there.


India is a land of civil rights, in theory, but of brutal oppression, in fact—especially for the 165 million members of the Dalits, India’s lowest caste. During Singer’s first trip to India a few years ago, he saw firsthand the systemic oppression of the Dalits (formerly known as untouchables) through the Hindu caste system. Singer was astonished by the fact that the world’s largest democracy was also a breeding ground for the world’s largest human-trafficking operations, that it would allow the exploitation of 15 million children in bonded labor, that it would tolerate temple prostitution and other forms of sexual slavery, and that it would foster economic and social systems that oppress nearly 25 percent of its people.
But there is a silver lining. A bond was formed between the Dalits and Christians. The Dalits began asking the church to help educate their children. Hundreds of schools sprang up, providing thousands of Dalit children with an English-based education (critical to landing good jobs) and newfound self-respect. The Dalits responded with another invitation: “If this is the Christian faith, come start a church in our village.” The result is that millions of Dalits and other Indians are coming to Christ, drawn by a religion that believes the ground is equal at the foot of the cross.
Singer was moved by the plight of the Dalit children, struggling to throw off the yoke of oppression and replace it with real freedom and dignity, so he committed to do his part because he believes that “no child should be untouchable.” So he is donating every penny from the sale of False Witness to the Dalit Freedom Network. His novel will take readers from the streets of Las Vegas to the halls of the American justice system and the inner sanctum of the growing church in India with all the trademark twists, turns, and legal intrigue his fans have come to expect.

False Witness begins with Clark Shealy, a bail bondsman with the ultimate bounty on the line—his wife’s life. He has 48 hours to find an Indian professor in possession of the Abacus Algorithm—an equation so powerful it could crack all Internet encryption.


Four years later, law student Jamie Brock is working in legal aid when a routine case takes a vicious twist. She and two colleagues learn that their clients, members of the witness protection program, are accused of defrauding the government and have the encrypted algorithm in their possession. Now they’re on the run from federal agents and the Chinese mafia, who will do anything to get the algorithm. Caught in the middle, Jamie and her friends must protect their clients if they want to survive long enough to graduate.
In this engrossing legal thriller, Singer shows how God is a God of justice and how, in His time, justice will be served.
False Witness by Randy Singer
Tyndale House Publishers / May 2011
ISBN: 978-1-4143-3569-8 / 416 pages / paperback / $13.99
http://www.randysinger.net/ ~ http://www.dalitnetwork.org/
For review copy and interview information, contact:
Audra Jennings - 800-927-051 x104
If you are a blogger, and would like to reserve your review copy now, click here.

watch on tyndale.com
Do you have a book club?
If you would like to have Randy Singer in person or via Skype at an upcoming book club meeting to discuss False Witness, we have a contest for you!
The first 10 groups that sign up will have the opportunity to have Randy appear either live or via Skype for a 1-hour discussion with the group. (In order to qualify, groups must have at least 20 members and have the ability to use Skype.)
The first 50 groups that sign up will receive a special book club package that includes a DVD, a reading group guide, and an assortment of Randy’s backlist titles from Tyndale House Publishers.
Click here to sign your book club up!
False Witness Randy Singer Tyndale House