My observations from the Royal Wedding

First of all, I think I want to change my name to Pippa. I've always hated my name, and I think Pippa could be fun.

And good grief, no, I didn't wake up early to watch the whole thing though I did get up in time to watch them walk back up the aisle after signing the register. My first thought was, "Prince William is bald." Though not as unattractive as his father, he's not quite the picture of the fairy tale handsome prince, in my opinion. Prince Charming had more hair.

While I normally hate PDAs, or at least really blatant ones make me ill, the bride and groom barely touched one another. Even afterwards, such as the carriage ride back to the palace. They didn't even sit close to each other. It just seemed odd to me.


I saw a recap today and the final song - "God Save the Queen." Everyone was singing. Everyone except the queen. My questions are, A) Is that weird for her? B) Is she not supposed to sing the national anthem with everyone else? C) Is she as much of a sourpuss as she looks?

Thank goodness we don't have the hat phenomena in the US. Seriously. Thank goodness we don't wear hats like this. Rupert Everett on the TLC coverage was hilarious talking about them. He especially hated Posh Spice's hat with the "antenna". The rest of the world calls her Victoria Beckham these days, but he still intentionally calls her Posh Spice. And as the "British Gentlemen" they kept referring to him as, he sure was dressed casually. So help me, he had to have been the only person in the entire UK yesterday that was wearing jeans and a sweatshirt. 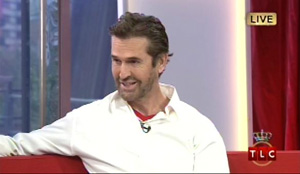 OK, I just Googled something that makes so much sense now. I was wondering why Rupert Everett did not look like himself yesterday. I was going to see if I could find a picture of him from yesterday, and my search yielded "bad facelift". Indeed. I was wondering why he looked so different. I'm sure that's old news, but I haven't seen him in a while. I wasn't the only one who didn't recognize him by my web search.
Now onto my hat commentary.

I think this one may be in the running for the largest circumference. 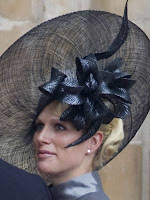 This blue one curved forward at the top point.
According to Piers Morgan on a video I just watched,
she  had just had nose surgery and was drawing enough
attention to herself that way. One suggestion was she just
tip it on over to cover her nose. She was rubbing
under her eye and nose a lot in the video.

I thought the Queen's hat was to boxy and traditional.

This hat reminds me of the curly drinking straws that Brookshire's
was giving away a few weeks ago when Peyton was staying with me. 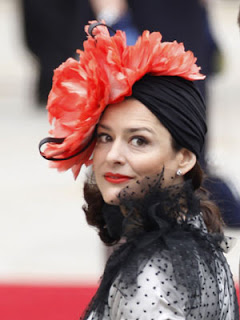 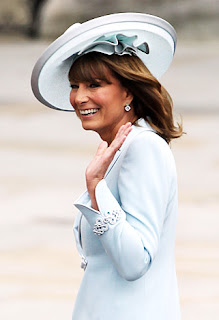 I don't know how Posh kept this one on.
And the downward antenna would bug me in my peripheral.﻿
And Mr. Bend-it-like-Beckham was much better dressed. 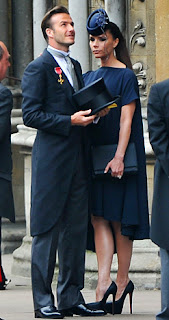 And someone had to have some feathers
in their hat like Yankee Doodle.
How could you see sitting behind these things?

Camilla really shouldn't do anything to draw attention to herself.
Ever. The swigglies sticking out aren't as crazy
as some hats I've seen in her photos. 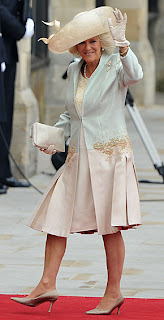 You know I love purple, but I don't love her purple get up.
You would think royalty could wear prettier clothes. 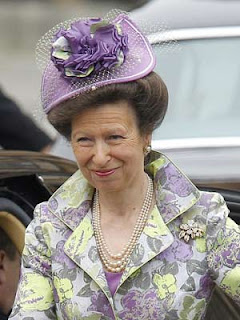 And the most ridiculous hats ever.
I think the designer was playing a mean joke on them. 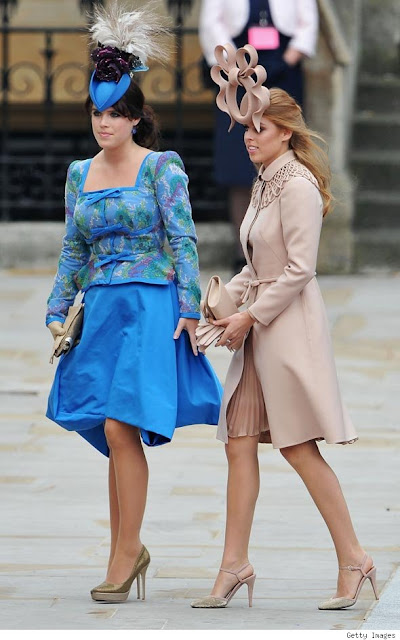