Why my limb will not sprout

April 16, 2011
So, I spent last night trying to follow another limb of my father's family tree. Quite frankly, I don't think they want to be found, and I don't blame them. I'm a little ornery and don't want to be found myself sometimes.

The "follow thru" in me (consulting my Kolbe test to better testify to this), wants to finish what I start. However, it's maddening trying to research it. The last thing I need is another "project" online in which to piddle. Take my scrapbook project I'm 6 months in and still didn't finish this week. That's actually strange for me. Personal vs. professional project, I guess.

Anyway, I don't think I really care. My mom finally found some branch that didn't come from England which makes me more interesting, but thank goodness I didn't have to look for it. My whole life I have heard that my dad's grandmother was a Native American. The closest we've found is another branch that lived in Cherokee County, North Carolina. I think she lied to see if the grandkids would believe it.

Someone else with family in our county was related some where along the way and had done quite a bit of both sides of my family's trees. It was kind of creepy actually. This was the person that came from Virginia and had pictures of the headstone. She even had the tree showing my brother and his wife's kids belonging to each of them along with random other relatives. OK, what's really weird is that it showed both of his wives and kids, but didn't have all the other family members. Like she zeroed in on our little twig of the tree.

This leads me to my next train of thought. When 100 years from now, someone finds my family tree and sees that my limb sprouted nothing. Nor will it extend to tie anyone to my side.

And I'll tell you why - there are a bunch of mutant fish in the sea. Yes, this was a part of the conversation Jenny and I had while looking at the weird facial hair of the wait staff and guys sitting around the bar area of Chili's prior to our evening at the theater. This one guy who probably should have been wearing a hair net, had a beard extending down from his sideburns at chin level, but also had perpendicular side burns midway down his face pointing towards his upper lip. If you can't picture this, the only thing you are missing is a freak show.

Then there was the guy that had a mohawk and was wearing a sleeveless shirt. Jenny was looking towards him and was grossed out watching him eat with his armpits exposed. I'm not so sure that guy doesn't play in the NFL, but that's really beside the point.

While waiting for our order, or perhaps it was while we were waiting for a waitress since the hostess stuck us in the corner and told us to go get our own table, I asked Jenny about the plumber. This is the plumber she was telling me about last Sunday night as in, "so, I went out on a blind date... the guy is 42, but you wouldn't mind his plumber's crack... he wanted me to send him pictures of my feet." Did I tell you about him? Probably not. That's pretty much all I know about him. I actually pointed out that plumber's tend to have a problem with their pants, but she said he was attractive enough that...

On Sunday night, Jenny told me that they were supposed to go fishing this weekend. Well, you know that saying, "fish or cut bait"? She cut bait before they went fishing. It seems Mr. Plumber pulled the "I think you're the one" line on her too soon. Gentlemen reading my blog, don't go scaring a girl off like that after one date. That can be a sure fire way to lose the new lure you were testing the waters with when the line gets cut. I'm not even sure that metaphor works.

I really think that Jenny needs to start a blog about these guys she comes across. The Nazi-Mobster, the Plumber with the foot fetish, etc.

So then, we went to our night at the theater. The local theater. We've decided all the plays there really are the same. But, that's a discussion for another time perhaps.

We pull up behind this truck here... 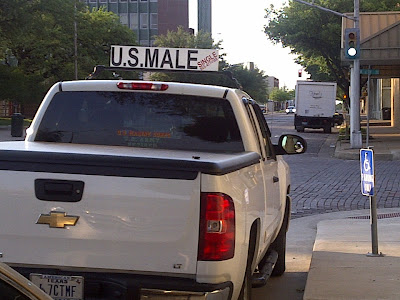 Yes, that writing that is too small for you to see is a phone number. Yes, some old guy with handicap plates is driving around town driving a US Mail truck. He probably has a George Strait CD in the player going around like the Sno-Cone man...
Let me be your mailman and I'll always come through.
There's no denyin’, come rain or shine,
I'll deliver my love to you.
I do things by the letter, you can put your stamp on me
'Cause there ain't nobody better for a special delivery.
Like a pony express in the wild, wild west
I'll ride hard all night long.
And I can saddle up fast, get you there first class
Long before the dawn.
You know your mail's gonna get to you
Come snow, rain, sleet or hail
'Cause I'm a top flight, hold-you-tight,
Get-you-there-by-daylight, do-you-right overnight male.
I know your heart is fragile, so I'll handle it with care.
There ain't no doubt, I know love's route,
So baby let me take you there.
I'll bring you cards and flowers, but I know just what you need.
Just give me 24-hours satisfaction guarantee.
When we got into the lobby, ﻿we found "US Male". He was even wearing a hat to prove it. The reason why his picture is fuzzy is because I was taking it without the flash so that he would not realize that I was taking his picture. I was just casually messing with my phone while he was flirting with Jenny. Called her over, told her he had a question for her because she looked like an intelligent woman. Then, he proceeded to tell her why the chicken crossed the road. And the rooster crossed the road because he was a Johnny Cash fan and he walked the line.
People, I could not seriously make this stuff up if I tried.
﻿ 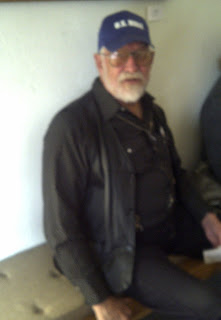 I'm telling you, these are the reasons why when we are in our 70s, Jenny and I will still be single and going out together on a Saturday night. And why I will never have ancestors trying to dig me up to find me on a family tree. (Not that I planned to have any even if I did find a male man of my own.) Except for my nieces descendants that heard about crazy old Aunt Audra that legends were made of.

Barbara Shore said…
That looks like the guy they arrested a few weeks back for kidnapping and possible murder....I think you girls need a chaperone.
April 17, 2011 at 12:26 AM

Ally Jones said…
I have to tell you with the pic and that title I had a completely different topic in my head that you were going to talk about. ;)

For us genealogy folks; do your family a favor and post on your tree that you are happy being single and do not plan on getting married. If you at some point find that special person, change it. That way when people find you they don't keep looking for that illusive spouse or put you with someone you are not married to. Happens a lot. Now days they usually keep your personal info most private as long as you are living.

About this guy, I totally agree with James! This guys is scary. Think you did a good thing taking a pic just in case he followed you guys home or something weird like that.