What do you really know about the Oregon Trail?

October 07, 2012
I remember always wanting to play "Oregon Trail" on my aunt's computer when I went to her house. She had one of the first home computers that I knew of anyone having. It was a Commodore 64. That's where my education of the Oregon Trail came from. Here's a fun way of learning more! 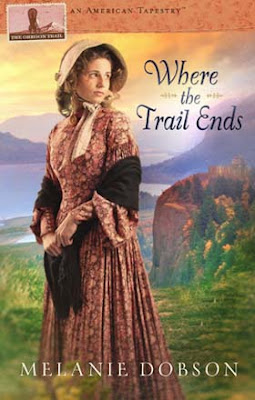 Trials on the Trail

Many events in our country’s history have shaped us into the nation we are today—countless stories of brave men and women giving up the lives they knew in hopes of making better ones for their families. Sometimes they lost everything they owned to build this nation, but in the midst of their losses, many of them discovered faith and love. Life was especially difficult along the Oregon Trail, as depicted in Where the Trail Ends by Melanie Dobson (Summerside Press/October 2012/ISBN: 978-1-60936-686-5/$12.99), one of two debut releases in Summerside Press’ new American Tapestries™ line of historical romance novels.

It’s 1842, and for 2,000 miles along the trail to Oregon Country, eighteen-year-old Samantha Waldron and her family have faced tremendous challenges to reach the Willamette Valley before winter. They have weathered autumn storms, hunger, thirst and the dangers of a wild and unfamiliar country. After the loss of first their mother and then their father along the trail, Samantha and her younger brother, Micah, are rescued from the mighty Columbia River by British exporter Alexander Clarke.

Once the three of them arrive at Fort Vancouver, Samantha is overwhelmed with men vying for her affections; after all, few women made the journey, especially unmarried ones. However, the only man who intrigues her, Alex, is already promised to another. When his betrothed arrives unexpectedly from England to escort him home, Samantha becomes determined to create a home for herself and Micah in the fertile valley far away from the fort. But how will an unmarried woman support herself and her brother in the wilderness alone? When Micah disappears into the wilderness one rainy night, Samantha must rely on the man she has fallen in love with—the man she’s trying desperately to forget—to rescue her brother again before it’s too late.

Where the Trail Ends is the one of two releases launching in Summerside’s new American Tapestries™ series this fall. Each novel in this line sets a heart-stirring love story against the backdrop of an epic moment in American history. Whether they fought in her battles, built her cities or forged paths to new territories, a diverse tapestry of men and women shaped this great nation into the Land of Opportunity. Even then, as is true now, the search for romance was a major part of the American Dream.

Melanie Dobson’s writing has allowed her to travel to and explore many locales around the country, but she was excited that Where the Trail Ends allowed her to stick closer to home. “Our family moved to Oregon six years ago, and I’ve been intrigued by the unique history of this state ever since,” explains Dobson. “Writing this novel gave me the wonderful opportunity to delve into the history of my new home state and learn about the strength and determination of the first Oregonians.”

Dobson has always had a love for reading about history but admits she was much fonder of the stories than the timelines. She often has to force herself to stop the research process in order to start writing, and she loves learning new facts along the way. “I’ve always been fascinated by how these emigrants could survive six months on supplies from a wagon, so almost every detail of the research captivated me. While I once thought that pioneers rode their wagons west, I discovered that almost everyone walked the entire two thousand miles from Missouri.”

Through her stories, Dobson enjoys sharing with her readers what she’s learned along the way and bringing to life the stories of what might have happened in a time gone by. In each of her books, she includes an “Author’s Note” to give readers an added bonus of more background behind the history of the story and pointers on where to go to learn even more.

However, by the time readers reach the end of the book, she hopes they have experienced an entertaining glimpse into our nation’s history as well as a reminder of how God cares for those who put their trust in Him. “Where the Trail Ends is about God’s faithfulness and protection and also about crossing over into what The Pilgrim’s Progress calls the ‘Celestial City.’ I pray God will use this story about a harrowing physical journey to encourage people wherever they are on their own journey.”

For more information on Melanie Dobson and her books, visit www.melaniedobson.com.

"A lovely, well-paced novel with enchanting characters and surprising plot twists. This is not your typical Oregon Trail story—there is more love than loss and more hope than grief on this wagon train west. Melanie Dobson gives her readers the delight of what happens after people arrived in the Oregon territory, with the assurance that the end of the trail is really not the end after all."
~ Jane Kirkpatrick, bestselling author of All Together in One Place

“More a historical tale with a romantic subplot, this book will have readers feeling like they are a part of the harrowing wagon train heading west on an exciting, amazing journey that they won’t want to end. Dobson’s characters face a variety of threats as they seek better lives.”
~ Romantic Times Book Review

Melanie Dobson has written eleven contemporary and historical novels, including five books for Summerside’s Love Finds You series and one of two debut releases in the new American Tapestries™ line. In 2011, two of her releases won Carol Awards:  Love Finds You in Homestead, Iowa (for historical romance) and The Silent Order (for romantic suspense).

Not only does Dobson enjoy writing historical fiction, she enjoys the research process that comes along with it. Because Melanie visits each location she writes about, she’s been able to spend time in the beautiful and fascinating towns across the country that bring her stories to life.

She met her husband, Jon, in Colorado Springs, but since they've been married, the Dobsons have relocated numerous times including stints in Virginia, Tennessee, North Carolina, Colorado, Berlin and southern California. Along with their two daughters, Karly and Kiki, they now enjoy their home in the Pacific Northwest. The entire Dobson family loves to travel and hike in both the mountains and along the cliffs above the Pacific.

Readers can keep up with Melanie Dobson by visiting www.melaniedobson.com or becoming a fan on Facebook.


You could win a Kindle Fire!

One fortunate winner will receive:
Enter today by clicking one of the icons below. But hurry, the giveaway ends on October 17th. Winner will be announced at the American Tapestries Author Chat Facebook Party on 10/18. Connect with authors Janice Thompson and Melanie Dobson for an evening of book chat, trivia and fun! There will also be gift certificates, books, and a Book Club Prize Pack to be won (10 copies for your book club or small group)!

So grab your copy of Queen of the Waves and Where the Trail Ends and join Janice Thompson and Melanie Dobson on the evening of the October 18th for a chance to connect with the authors and make some new friends. (If you haven’t read the books – don’t let that stop you from coming!)

Don't miss a moment of the fun, RSVP today. Tell your friends via FACEBOOK or TWITTER and increase your chances of winning. Hope to see you on the 18th!