July 09, 2016
I am too lazy to go upstairs to my laptop, so I am typing this blog up on my phone, and there is no telling what this looks like because I am using the web version instead of mobile version on my phone and the controls aren't working. I know all of this is centered, or at least was at one point, for example, but I cannot fix it. I am hoping the type isn't gigantic.

When we went out to hook it up and drive it off, Dad told me to look in it since I had not seen what I bought. He asked, "how's it look?" When I only raised an eyebrow in response, he quickly added, "like a trailer?" I nodded.

Anyway, when we got back, Mom and I went to tour the newly restored Navarro County courthouse. I didn't take pictures of some of the nearest parts. The district courtroom is pretty amazing. This was the only chance to get a picture of this view from one of the top floor circular windows. 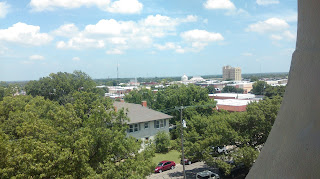 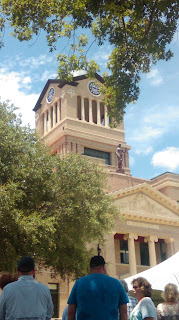 I did get a little bit of random work done in the studio. No photos to share yet.

I did get my Reds program framed and on my baseball wall in my office. The frames don't actually look that crooked though the tape holding them in the frames does wear out after a while. 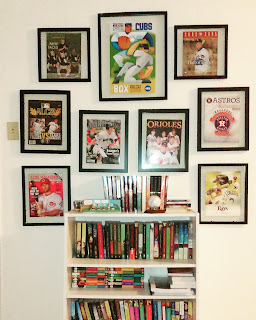 And because life is boring, after needing to for longer than I will admit, I finally got my mug shelf dusted. I added two new ones last week. Now I need to get up out of my chair and dust the hutch next to the shelf with more mugs. It's super dusty too. I really am going to have to sneeze after working on it. 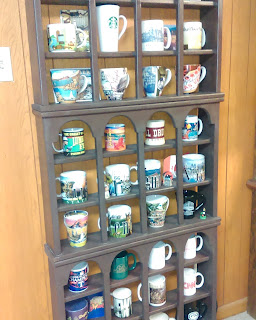