An eventful afternoon in the neighborhood

April 13, 2019
I know you can't tell just a whole lot from these photos, but it was an eventful day in my neighborhood. The pictures were taken from the safety of standing inside my home.

I had been out and about running errands this morning and had been over at Mom and Dad's house. I left there and came home. It had been raining some, but up to that point, no big deal. I pulled up in the driveaway, went to put my purse up and go to the bathroom, then heard all sorts of noise outside as the wind picked up. I went into my craft room and looked out back. This is what I saw: 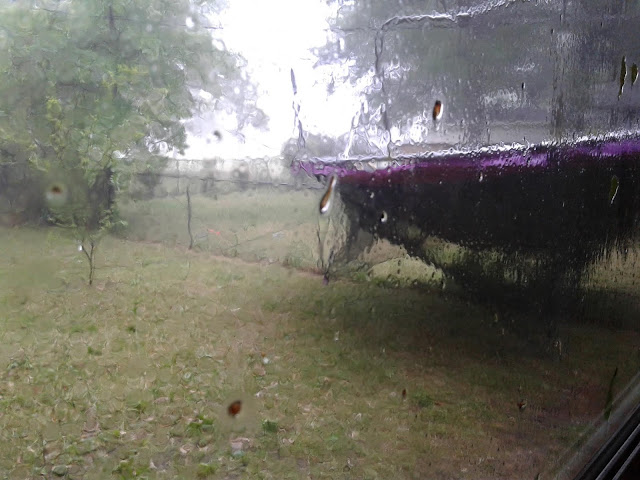 That's the neighbors' trampoline. It had flipped and flown. Two-thirds of it were over on my side of the fence and the frame was all bent up. It barely missed the power line going into our houses.

It did pull down the cable and phone lines going to the neighbors' house. They are hanging down low over my yard.

Shortly after, I stepped out front to stand in my garage. A couple of cars had turned around in my drive way, but I didn't know why. There's a tree at the end of my driveway that's on the property line of between me and the neighbor. It looses limbs easily and they were scattered all over the road. Any car turning around had to navigate around those.

The trampoline neighbor had a friend stopping by and he commented on how a tree up at intersection was smoking.Large branches had broken off of it and blocked the road. That explained the turn arounds.  I went on back inside.

Then, I heard a noise. I couldn't quite figure out what it was, but I didn't think anyone would be cutting down trees so soon. It was the sound of a downed electric line up in the intersection, out by the neighbor on the other side. The live wire was jumping around and sparking in middle of the street. At one point, it almost caught the grass of that yard on fire. The fire department directed the detour of traffic for a while until Oncor could come out and tend to the line.

Somehow, I managed to have phone service, internet and electricity the whole time, even with the downed lines around me. 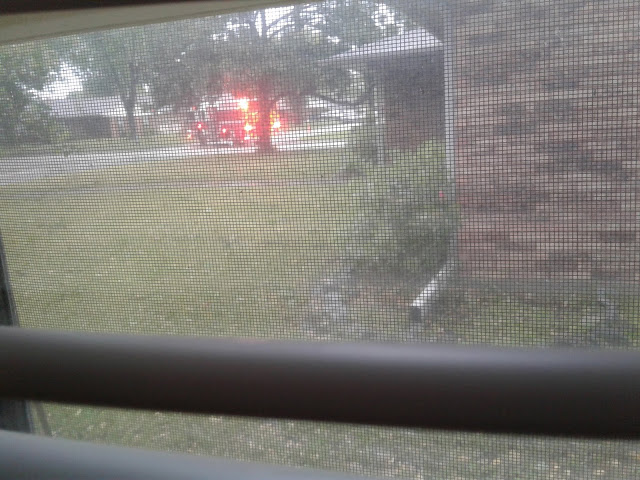 Mom and Dad came over later. They live less than 2 miles away, but their neighborhood didn't get such the hit. They said it looked like a mini tornado came right through the park and down my street.