There's a reason why we don't do outdoor events 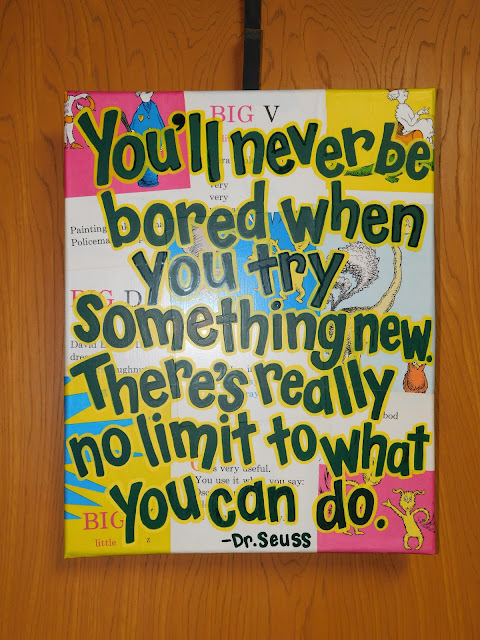 Last week I worked on canvases for Derrick Days here in Corsicana this past weekend. I added a new quote from Dr. Seuss into my collection.

This was going to be the only spring event we did since it was home (we're going to try one more this coming weekend). It's the only outdoor event we ever do, and this weekend was a good example as to why.

When we unloaded, Dad wasn't going to get out the weights at first. "I don't know if we'll need them," he said. I said that I thought we need some kind of weights. So we got the flat weights. During set up, some of our stuff was blowing terribly bad. Whole displays were falling over. The tent was blowing up. Dad had to go for the cinder blocks.

The booths across the street had to give up on their tents.

Even with the cinder blocks, we were having to zip tie everything in place and hold down the tents in gusts of wind. Dad was about ready to pack it up and go home. We finally had to take the covers off the top of the tents to so the wind wouldn't try to carry them away. We had to put up part of our merchandise that usually sells well.

We did ok, but not as good as we might have if we got to put out the merchandise we wanted to. There was a lot we couldn't get out.

Dad says this was probably the last year of Derrick Days. It's horrible to have to depend on the weather.
Derrick Days Dr. Seuss Seuss quotes