Senior night at the softball game


Tonight was senior night at the softball game. Peyton's just a freshman this year, but these girls are in Paige's graduating class this year. I can't believe they are graduating! I know adults say that all the time, but it's really hard to believe... (keep reading below). 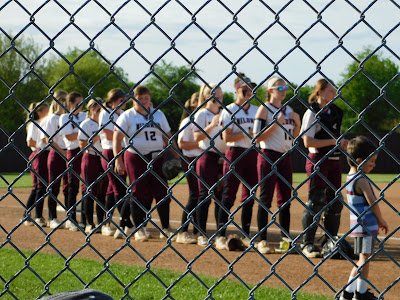 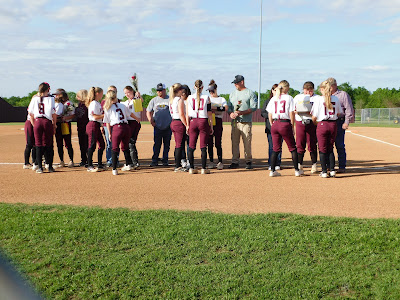 I have this realization at church too, not just school events. The group graduating is the first group I taught out at Westhill. They were three or four years old when I had them then. I taught them again for a year as 5th graders, and that's when they really became a part of my tribe of kids and I really got into teaching regularly.

I was close to the girls when they came over to my house and I chaperoned at youth retreats. Two of the boys stalked me for a couple of years at every single church service. Then, when whatever it was that happened (I still don't know what that was and just assume I never will) and I was no longer around Paige, I just missed out and feel like I lost track of time. (The boys finally stopped following me around by that time because I was no longer that cool.) I think it would be easier to come to the realization if I had been involved through the high school years.

In the top picture, number 7 is Chloe. I vividly remember the first time I ever met Chloe. It was either public school week or some other reason why family could come out and eat at the school with students. Paige was in first grade, and I stopped at CiCi's to get a pizza to take out to her. Chloe was Paige's best friend and was sitting next to her.

We offered Chloe some pizza because she was eating the gross cafeteria food. I can't say with absolutely certainty, but it may have been a burrito served with something that seemed like a strange pairing. Corn may have been involved. Paige explained how I was her Baqbaq. That day, I became Baqbaq to Chloe too.

I've seen Chloe play quite a bit of softball over the years. She played with Paige before Paige gave up the game. Earlier in the season, Chloe hit a homerun. She was so excited, and I was so excited for her. I have to admit a tear came to my eye. Now, she's coming to the end of her time of playing high school softball.

I'm going to be pretty emotional and sentimental in the coming weeks as I scroll through Facebook. The ending of an era, the turning of a page, right?
Mildred High School senior night softball