And just like that, softball season has come to an end 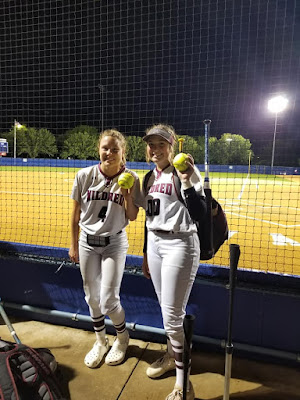 After the Mildred Lady Eagles won district, we really believed they would go far in the playoffs. The first round was this week.

The bi-district rounded started Wednesday night in Waco. It rained and poured all day long. My parents and I thought there would be no way they could play. I texted Peyton at one point. The game originally was supposed to play at 6:00 (I think). Then, the game got pushed to 7:30 PM. Peyton said that if the rain was supposed to end at 8:00, they might be able to start at 10:00 and get the game in by midnight.

I knew that I would have to drive over there, and I hate to drive in the rain. I really thought the rain was over the roads. We decided to play it safe and stay home. I kept checking with Mom and Dad to make sure this was our plan. About 11 PM, I saw a post that they had played and lost. And I saw the picture above. Peyton (on the right) hit her first high school over-the-fence home run, and I missed it. I was so mad at myself. I couldn't believe I missed it.

On Thursday morning, I called to break the news to my parents, feeling guilty because I didn't want to drive over there.

It was a best of three series, so it was back on Thursday night. All of the parents and grandparents from our team pointed out how we missed it. It turns out the rain stopped right about game time and they got to start just a little later than planned. It was an all turf field, the only way they could have played.

In a close game where we led (barely) the whole game, we lost in the last inning. Like that, softball for the season came to an end way too soon.
softball