The changing of a culture starts with those who are living within it.

April 24, 2019
What do Jeremiah’s prophesies have to do with our world today?
Jeremiah found himself in a nation known for materialism,
economic crisis, political globalization, and religious plurality.
Does any of that sound familiar? 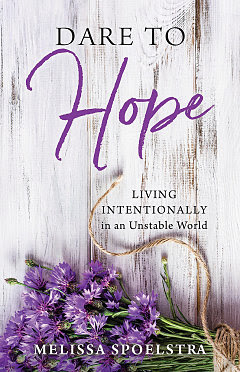 As Melissa Spoelstra, author of Dare to Hope: Living Intentionally in an Unstable World (Abingdon Press), writes, “Jeremiah was referred to as the weeping prophet because he brought a message that didn’t feel very hopeful. God used Jeremiah as a mouthpiece to tell the people how they had gotten off course. Though there were times when Jeremiah experienced depression and discouragement, he still knew where to turn. When he poured out his heart, God reassured and encouraged him. Jeremiah chose to dare to hope based on God’s faithfulness rather than the trials he and his nation experienced.”

In the Book of Jeremiah, God calls out to His people, continually asking them to place their hope in Him instead of political alliances, material possessions, and people. Spoelstra wants readers to recognize hope-filled living is possible, even in an unstable world.

Below is an excerpt that shares more of the message from Dare to Hope.

Excerpted from Dare to Hope: Living Intentionally in an Unstable World by Melissa Spoelstra, © 2019 Abingdon Press.

My husband and I discovered in our first year of marriage that doing home projects together is dangerous. When we tried to put up a wallpaper border in a bedroom, we had some pretty rough interactions. The root issue stems from both of us being control freaks. We like to lead and direct how things go. This can be a good thing in certain situations like when God has called us to lead, but when we have different ideas about anything from parenting to finances, our controlling natures war against each other. After several decades of marriage, I hope we have made some progress in the area of compromise—at least in the domain of painting walls and organizing the garage.

Being a control freak can get me in trouble in the spiritual realm as well. When life seems to be going as I think it should and God’s instructions through His Spirit and His Word make sense to me, then I don’t have to be daring with hope. However, I find more often that life feels complicated and often God’s instructions take faith rather than sight to obey. It is during these seasons that I must raise the white flag and surrender to God’s way.

The prophet Jeremiah experienced some instructions from God that didn’t follow the rules of logic. God told him to hide underwear, speak bold messages, and identify counterfeits in the lives of the political and spiritual leaders of his day. I can’t imagine what this would have been like when he was first called to deliver God’s message of surrender as a boy of likely fourteen or fifteen years old. Though we might think that Jeremiah and other prophets of the Bible were super righteous, had it all together, and never struggled, the truth is that they were normal people like you and me. Jeremiah got depressed, made excuses, and even did some whining occasionally. But there is something that sets him apart from most of us: his unrelenting commitment to communicate God’s message. You might say that Jeremiah was both deep and relatable!

Although Jeremiah’s words resound from over twenty-six hundred years ago, they echo into our day with uncanny relevance. Our world is rife with greed, poverty, injustice, racism, and oppression, just to name a few of the challenges and battles. So what is our message to the world, and how do we go about sharing that message? To answer that question, we can look to the prophets—whose message, the disciple Peter said, is the light our dark world needs:

Because of that great experience, we have even greater confidence in the message proclaimed by the prophets. You must pay close attention to what they wrote, for their words are like a lamp shining in a dark place—until the Day dawns, and Christ the Morning Star shines in your hearts. Above all, you must realize that no prophecy in Scripture ever came from the prophet’s own understanding, or from human initiative. No, those prophets were moved by the Holy Spirit, and they spoke from God. (2 Peter 1:19-21)

When we pay close attention to the writings of the prophet Jeremiah, we discover that the changing of a culture starts with those who are living within it. If we long to see a turning back to God in our land, then we need to recognize that it starts with us—with you and with me. Not only does Jeremiah’s prophecy matter today; God Himself gives us some direct instructions regarding how we should respond to it. Let’s unpack a few of these together.

Learn more about Melissa Spoelstra and
Dare to Hope at www.melissaspoelstra.com.