January 02, 2021
Last night, I lamented over needing to escape from the house. I did head uabout 10 miles up the road to a basketball game this morning to watch Peyton play. The game was against the other team in their district that had been undefeated in district play. Everyone was psyched about what a big game it was going to be. 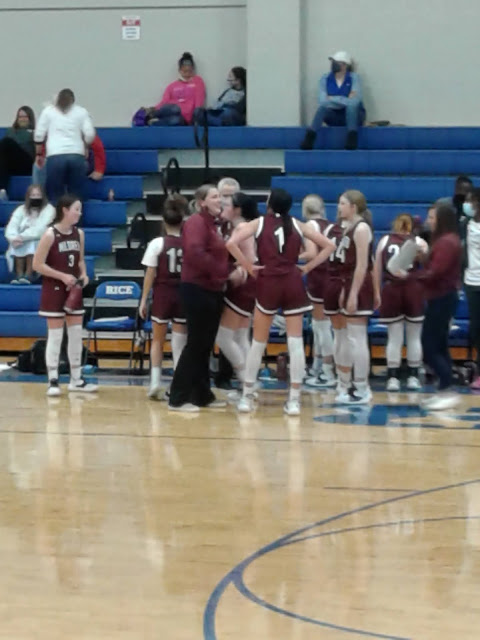 The game started off close, and the scoring was really low in the first quarter, but the game didn't end as tight as anticipated. 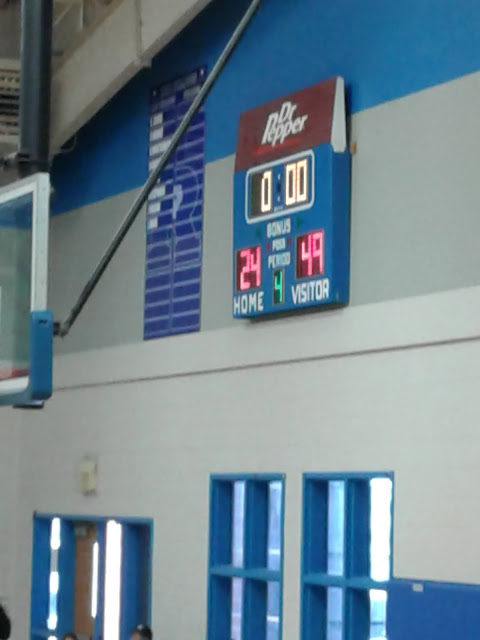 Peyton's team, the Mildred Lady Eagles mightily handled the Rice Lady Bulldogs.
I tried texting and getting Angie's attention to head over to Canton since I didn't go yesterday. By the time she got my message, she was willing to go, but it was too late in the afternoon to really have a productive trip.
Instead, I went to Starbucks and gave my blog a facelift. It took forever (hours) fidgeting around with it and completely changing themes again after I had everything set, but what do you think?
This week in EveryPlate cooking, I tried a couple of new recipes. 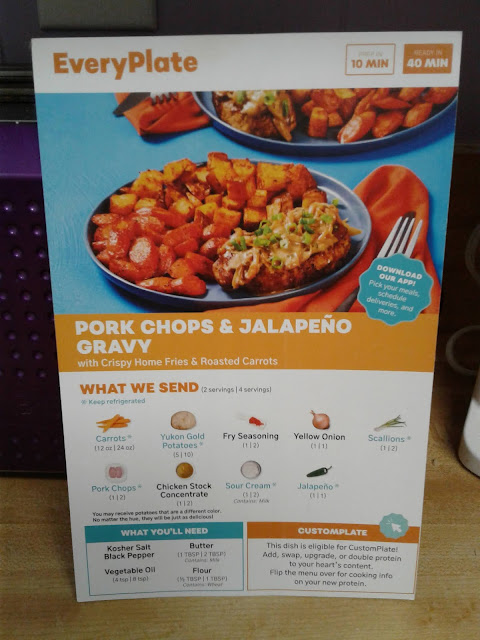 I subbed potatoes for sweet potatoes on another recipe, and used the sweet potato with pork chops. Actually, I was supposed to make sweet potato chips out of it, so ended up buying an extra.
Yeah, that's way too much orange on my plate. I eat a lot of carrots. If they actually helped with your eyesight... (At least when I went to the eye doc on Thursday, at least my eyes hadn't gotten worse.) 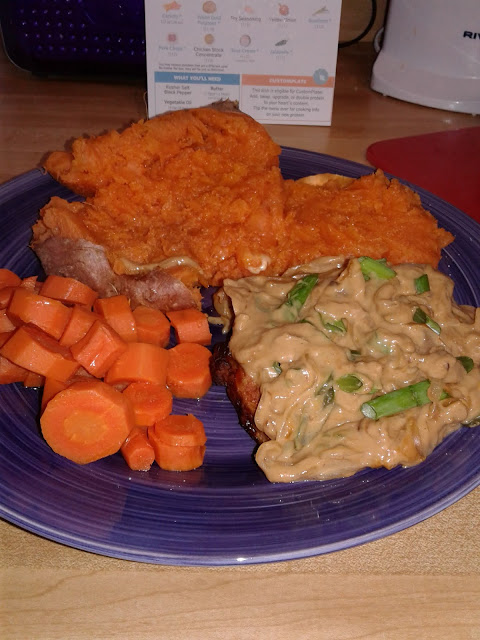 I made extra gravy, and used milk instead of water. Flour + Water = Glue. Flour + Milk = Gravy.
You could put as much jalapeno in it as you wanted. I put too much. It might have been ok if I backed off the pepper, but generally speaking, Not so much a fan. I also managed to overcook my porkchops even though I took them out and checked them and thought I got them out in time.
Now, the other one was a bit of a wild card. This was either going to be really good or be an awful combination. I've been scared of chicken sausage. People in the Facebook group have been raving about it, but it just sounded all kinds of disgusting to me. Then, what would couscous be like in soup?
I like tomato soup, but it can be hit and miss. 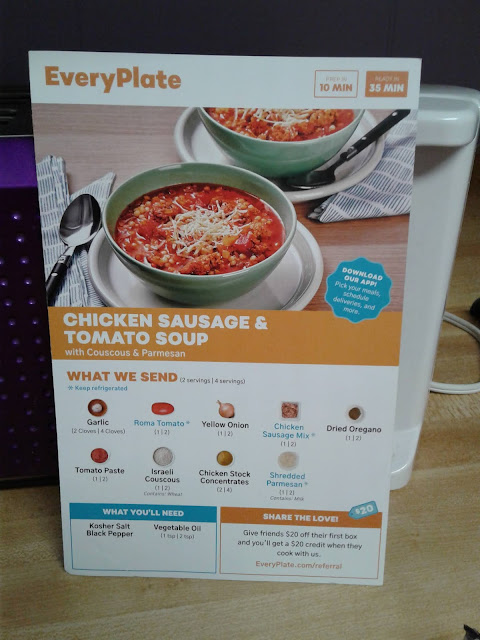 Oh, and I pulled out some of my new kitchen tools, including my ground meat tool. I also got purple knives for Christmas. It's amazing how great a new sharp knife will work (especially a tomato), but was a bit worried about taking off a finger. 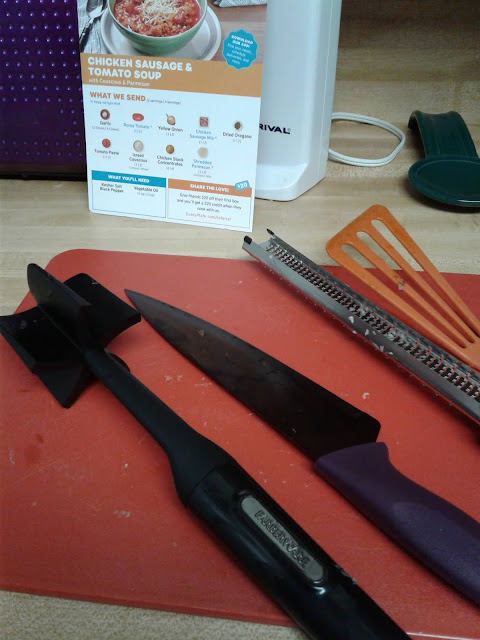 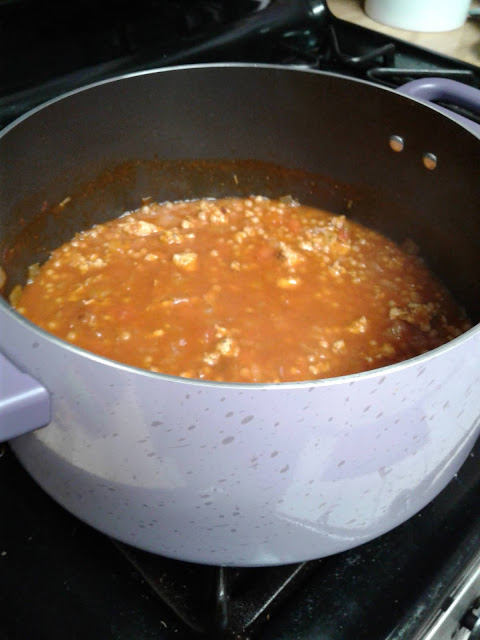 This was really, really good! No reason to fear the chicken sausage, and it didn't need crackers like tomato soup usually does with the couscous.
I'll get three instead of two meals off of it too because it made quite a bit. By the time I have it tomorrow, it may be thicker than soup though. That's kind of the thing with all the EveryPlate soups.
If you want to try EveryPlate, use the link above to get $20 off your first box! 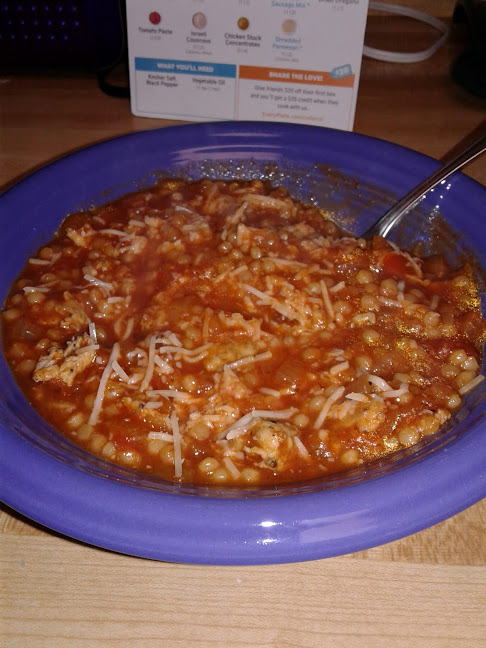