The Bachelor: Week 4: Matt: I Can be a Mean Girl if I Want to 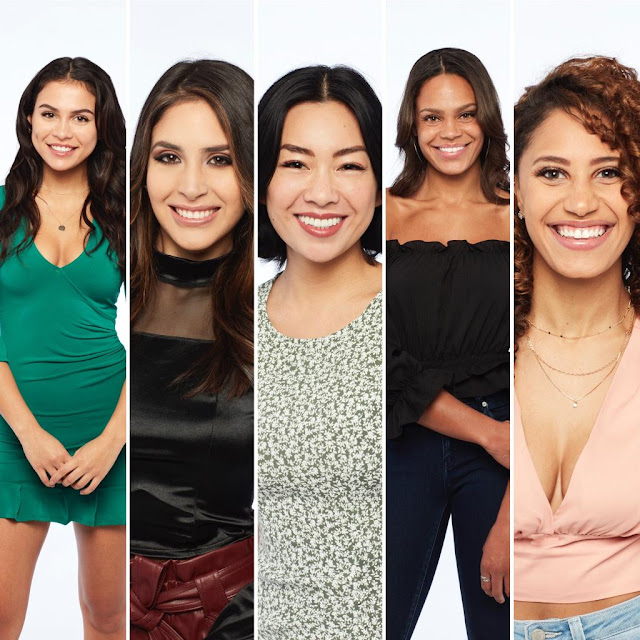 When we ended last week, Sarah had decided to go home to take care of her father. This all happened around the time the third date card was supposed to be read.

I hate it when an episode doesn't end with the rose ceremony, but the week before, we ended mid-rose ceremony when Sarah had her fainting spell. Therefore, we're all off whack.

The episode starts with the next day when it's time for Matt to contemplate the night before prior to going on the next group date. He had shared a lot with Sarah, and now he's scared of who else might not want to be a part of his journey.

Meanwhile, the women talk about Sarah leaving. Victoria says the trash took itself out. Katie calls Victoria on the toxic talk--why keep talking about it?

The group date doesn't start until the evening. Basically, it starts with a cocktail party. MJ takes Matt off first. She asks how he's doing to focus on him.

Other women do the same thing and affirm that they are here for him.

We run through conversations pretty quick until we get to Chelsea. Chelsea shows a photo with her mom. In the photo she had hair, so they talk about the stress of black women and their hair. She said shaving her head was so freeing to her. Matt says she looks good both ways.

Back where the women are... Victoria wants to talk to Katie. She calls Katie out for not letting her finish her sentence that she can express herself anyway she wants. She can about people anyway she wants. It's a really stupid conversation because obviously Victoria is being rude and wants an apology for anyone calling her on it.

Oh, wow, we're already at the end of the group date. It literally just started. He gives Chelsea the rose.

The next evening is the rose ceremony. Kaili comments that there is 18 women left with Sarah gone, but I thought they were down to 17 now. I don't know who can't count me or her.

(It was me... had to go back and fix my post from last week. I missed one of the Serenas in the rose ceremony. Realized it when roses were going out this week.)

Victoria says since she didn't get time last week, she's going first. She heard Anna wanted to go first, but Victoria calls herself Elsa, and she gets time before Anna.

Neither one of those women get the time first. Pieper does. I think it's Pieper. Since we spend so much time on the annoying women, I'm still trying to figure out a few of the others. They talk about strong women and how she is a strong woman.

Kit is up next. She talks about how she thinks there's chemistry. He says he enjoys spending time with her.

Matt appreciates how Katie came in differently the first night.

He reassures Bri that what he feels is real.

Victoria talks about it being hard and scary since she's not sure what he feels about her. They are interrupted by Chris Harrison. She's so frustrated that she got interrupted and can't complete her one thought.

Chris and Matt walk back in, through the lobby, and back out the front door. Some of the women go off to spy at what's going on. There's some speculation about Sarah being back.

They walk out to the very front where the limos drove up the first night. There were a record number of women who wanted to meet Matt. There are more women coming on the scene.

Brittany, 23, Model, Chicago, IL -- She kisses him right off the bat to make up for lost time. She made quite the impression. The women inside observe she's walking up like she owns this.

The women inside, of course, are not pleased. When Brittany comes in, she says a few more women are coming. She and Victoria exchange words right away.

Brittany then tells them she made out with Matt on her way in.

Michelle, 27, Teacher, Edna, MN -- Matt asks where she is from. He says he hasn't heard her accent come out yet, but Michelle tells him that he will.

Ryan, 26, Dancer/Choreographer, Brooklyn, NY -- That's all there is to her arrival. No other details.

Kim, 28, ICU Nurse, Los Angeles, CA -- She seems to not be a match with the typical woman on the show. More "every woman" than most. As someone socially awkward myself, she seems socially awkward.

Anna steps away from the window part way through saying she needs to be in a better mental state when she gets her turn to talk to Matt.

When Catalina comes in with her crown, Victoria wants to meet her and calls her over to where she is. Victoria says that since she's the queen, she think she should have Catalina's crown. In fact, she snatches off her head, and puts it on her own. When she takes it off, she puts it on the table instead of giving it back to Catalina.

The women are not happy they have to spend time that night with five other women. Matt knows there is going to be hostility and drama... and that he is going to be in trouble.

The women make it no secret to the new women that they are not welcome here, and they aren't happy.

Matt comes back in. He asks how they are doing, and the general answer is, "Not great."

Matt welcomes the new arrivals and says he looks forward to getting to know them better. Victoria takes Matt out to finish his conversation.

Katie tries to say the energy is because some of the women there are already deeply invested in Matt.

Anna tells Pieper that she recognizes Brittany, and they are both from Chicago. Chicago is not like being from Corsicana where I live. How on earth do they know each other already?

Victoria says in real life she normally runs for the hills, but she thinks the two of them would be a good match. Brittany comes out to interrupt. She's a little crazy from being stuck in her room in quarantine for a week.

Khaylah has steam coming out her ears.

All of the women have a chance to talk to Matt, including Kim in one of the most ridiculous dresses. It's floral and kind of has a bikini top with a skirt, but it may be all connected in the back. It doesn't look like a style she would normally wear, and the pattern is just odd. She talks about her drooling dog.

If Matt talks to anyone else other than the new women after this point, we don't see it.

It's time for the rose ceremony.

Matt tells Chris he isn't sure what to think right now.

As a reminder three women already have roses from dates: Serena P., Rachael, and Chelsea.