August 30, 2012
An Interview with Sibella Giorello,
author of The Stars Shine Bright

Q: The Stars Shine Bright takes place at a race track. What drew you to that setting?

Here's one key for writing fiction: Don't squash the "weird idea." Sometimes that weird idea is your best friend.

Last year, the weird idea was gambling and horses. Aside from driving around Seattle in the rain, I don't gamble. And I'm not a "horse-girl." But this idea kept pulling at me. When I mentioned it to my husband, he said: "I got a guy."

Note: My husband is from New York City, he's "got a guy" for everything.

But this guy turned out to be a former jockey, who now owns part of a race horse. He spent weeks showing me the local track, including the back barns. He also introduced me to the track vet, who was invaluable. The vet told me to come on his rounds, starting at 5 A.M.

It was all a gift, because it's difficult for strangers to get inside barns at most big race track. Trainers and owners are wary -- justifiably so -- that somebody will steal their training secrets or use the information to sway the betting odds.

But with these two guys, doors opened.

And from there, the "weird idea" started to unfold like a map.

Q: Has that ever happened before, when a certain person makes research easy?

With every book, keep thinking: "Well, THAT will never happen again."

But it does. With every book in this series.

When I was researching The Mountains Bow Down, for instance, my family took a cruise to Alaska. Our first day at sea, I went to check out the chapel, where the chaplain was giving a sermon. It was a good sermon, and I thanked him for it afterwards--only to discover the guy was also the ship's cruise director. When he asked about my trip, I told him, almost apologetically, that I was doing research for a murder mystery.

"There are hundreds of ways to kill people on this ship. I'll show you."

For the next seven days, he took me from the engine room to the kitchens to the captain's bridge, pointing out the hazards and dangers.

If that sort of thing is not the hand of God, I don't know what is.

Q: Your books are known for in-depth research, especially with geology. Beside horses, what kind of research went into The Stars Shine Bright?

My kids have gotten used to piles and piles of books in my office. It looks like a cave with stalagmites made of paper.

Before starting each book I comb through Forensic Geology by Ray Murray. It's the definitive textbook on the subject, and a really great read even for the layman.

For this book specifically, I read several autobiographies of agents who went undercover, including The Last Undercover by Bob Hamer. Then a bunch of books on wagering, which were colorful and often funny. How odds are determined, what constitutes a long-shot. I still don't understand wagering entirely. It's like some intuitive calculus with greed as one of the variables.

But I also read a half dozen astronomy books, trying to understand something about space and getting to know constellations. I wasn't sure how this title -- The Stars Shine Bright -- fit into the story, but the more I read, the more clear it became.

Q: The Stars Shine Bright has Raleigh Harmon going undercover for the FBI. Why did that situation appeal to you as an author?
Raleigh Harmon's been undercover most of her adult life--she just wasn't getting paid for it.

Right out of college, she started working for the FBI as a forensic geologist. Then her father was murdered, and she chose to become a special agent. But she never told her mother about the FBI, because her mom's mentally ill. She suffers from paranoid delusions. Raleigh's only said she's a geologist. Which is true, but not totally true. That's why I mean when I say she's always been undercover.

But now the jig's up. In The Stars Shine Bright, her mother's been sent to the state mental hospital, and Raleigh's decided, finally, to be honest with her--right when the FBI tells her to start lying.

That whole double-life (or double-double-life) was a terrific challenge, especially since Raleigh is so blunt about everything else. Really fun to write about.

Q: After four Raleigh Harmon novels, did you approach this fifth book any differently?

Every book is written on my knees. I am not kidding.

They all begin with that "weird idea," followed by a bunch of imaginary friends who have personality issues and who all demand to join the adventure. And since it's crime fiction, somebody's going to die.

If that doesn't drop a writer to the floor, they're either dumb or bulletproof.

But there was one difference with this fifth book. Music. In particular Herb Alpert's "This Guy's in Love with You." I didn't know why that song was important until the book's second-to-last chapter.

Which brings me back to my first point: Every book is written on my knees. The unknown is just too overwhelming otherwise.

Q: Raleigh Harmon's definitely faced some serious ups and downs. When you first started writing about her, did you see those challenges coming, or have they surprised you?
Raleigh's taught me that sometimes the writer is the last to know.

When I first "saw" her, I was a reporter at the Richmond Times-Dispatch. I would walk to work and pass a certain house, this brick mansion on Monument Avenue. It sat across from an enormous statue of General Robert E. Lee. But this house wasn't like all the other stately mansions. This place was a mess. Overgrown magnolia trees, ivy climbing over the cracked slate roof.

But I clearly "saw" who lived there. Raleigh Harmon. Her mentally ill mother. The black dog. Back then, Raleigh struck me as so strong and capable that she was unlikely to change.

I know God gave me Raleigh Harmon to write about, and I also know He's laughing now. Because I was so wrong about her. 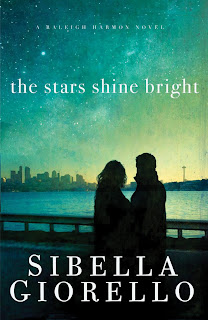 Q: What sort of books do you read for fun?

For fun, I always come back to mysteries. It's in my DNA. I grew up in Alaska without a television and my dad was a judge. Instead of hiring babysitters, he had me sit in his courtroom. A significant part of my childhood was spent listening to cops, thieves, swindlers, wife beaters, child molesters, and lawyers. Today somebody would probably call Child Protective Services but it was a fantastic education. Even better, my grandmother sometimes came with me. It was quite the contrast. She was one of those elderly women with perfect posture and perfect diction who attended daily Mass. But she also liked to discuss motive and means, and she was extremely well-read. She layered all that courtroom experience with Dickens and Dostoyevsky and Chekhov.

Given that background, is it really any wonder I'm into crime fiction?

Q: What writer or book most inspired you?

That's so difficult to pinpoint. I really believe some kids are marked to become writers. And certain books almost whisper their name. It makes you want to grow up and write as well as those authors. For me it was books like The Wolves of Willoughby Chase by Joan Aiken and the Narnia collection by C.S. Lewis. Later came the great mysteries by Dashiell Hammett, Ross Macdonald and John D. MacDonald.

But what keeps me inspired is the Bible. And you know, whenever I say that, some people gag or groan. They feel a need to distinguish themselves, maybe they want us to believe they're too intelligent for scripture. But those 66 books are sheer poetry, and they cover the most crucial questions. What's life all about? Who is God? Why are we here and what's the plan -- for individuals and for humanity?

Q: Did you have an easy time finding an agent and publisher?

A friend sent the manuscript for my first book, The Stones Cry Out, to her agent. This was a great agent, among the best in New York City.

But we didn't see eye-to-eye.

First of all, she couldn't believe a forensic geologist would question evolution. Secondly, she wanted me to change Raleigh Harmon from a Christian into an alcoholic. I guess she saw them as equal handicaps, except being a drunk was somehow better marketing.

I wrote her back, thanking her for her time, then politely advised her to get out of New York City.

My writer friends were horrified. That reply was the kiss of death, they said, the agent knew better than I did.

But another writer gave me the name of her agent. Several months later he sold that same manuscript to Revell, and the following year The Stones Cry Out won the Christy for best first novel.

Which means, five books later, I'm still right about Raleigh Harmon.
Q: So you don't think there's a problem with a scientist who's also a believer?

No. In fact, I can't understand how anyone, especially a scientist, could believe in evolution. It's scientifically impossible. For evolution to work—for random chance to be the operating system—we would see tornadoes blasting through junk yards and leaving behind F-15 fighter jets.

But that's not how what we see.

We live in a highly designed world. Check out one tree—just one—from its root system to its leaf veins. In mathematical terms alone, random chance can't create that sort of engineering. Meanwhile, we have scripture telling us, the heavens declare His glory. That's an invitation. God wants us to explore all these mysteries of nature. I think atheists and Christians make the same mistake, seeing the world as binary. As either-or.

The world is both. God and science.

That's why Raleigh Harmon is a geologist and a believer. She knows who created the universe, and she looks to science for the means and methods.

Q: So what's next for Raleigh Harmon?

One picks up where this book leaves off. As readers will discover, she has a whole new life after The Stars Shine Bright.

The other series is a prequel. Her life before she became a forensic geologist, before she joins the FBI, before her father dies.

I'm thrilled with both series, and I hope readers will be too.