The Choice - You could win a Nook Color!

August 20, 2012
If you've read my blog before, you've read a few reviews of books by Robert Whitlow. You've also heard me say before that I don't ask for a lot of books because I don't have time to commit to reviews on a schedule. And part of the books I read I don't post reviews of because I forget or get busy or whatever.

And you should also look at my office. I mean my library. And now I have a Kindle (as of this week!) and am quickly accumulating free books on it that I've gotten off of the Inspired Reads website. (Check out Inspired Reads and Vessel Project for free e-books without "must review" strings.) Based on all our blog tours right now, you'll be getting plenty of posts on new books and CONTESTS in the next couple of weeks. There are a lot of new books hitting shelves if you are looking for some great recommendations.

Here I am rambling on to say that I set a reminder on my computer to pop up on the morning Book Sneeze was offering The Choice so I could get a copy. I was going to to make time to review this one! So, I requested it, then went off on vacation. When I met Amy (the Litfuse Lead Hen) in Seattle, we were talking about books and requesting books and why we don't request books because we have a lot of publicity projects going on right now and blog tours. I told her this was the one book I had requested in a while.

She told me, "oh, we just got that book for a blog tour." Before I got back home, I had a second copy headed my way. This is one book that I have to keep, and have another copy to pass around. Let me start my review this way:

My mom has already read it, she's passed it on to a friend who zoomed through it, then has given it to a third person.

Years ago, I picked up one of Robert's books because the company I was working with had done a radio show on the book, but we didn't work with the author. This is actually the first time I've worked with him, and the other day, I emailed about something and told him that The Choice was my favorite of his books. He replies back:

"Almost. I admit to having tears in my eyes. I gave the book to my mom (because I'm her own personal library) and she was crying so hard she had a hard time finishing it."

I told my mom about this exchange, and she was tickled to death. She told Ruth Ann. Ruth Ann read 100 pages one day, got up the next morning and didn't stop until she finished (300+ pages). And Ruth Ann cried. When she gave the book to the next person in line, Mom told her she had to cry to enjoy it.

It's that kind of book. But in a good way.

One of the things that makes this book different than the rest of Robert's books is that instead of the main character being a lawyer, she needs one. But that comes later in the story. (That's not a spoiler because all Whitlow books work the attorney part in there somewhere - after all he's one himself!)

The Choice tells the story of Sandy, a high school senior who finds out she's pregnant. It's 1974, in the time when Roe vs. Wade was just being decided and teen pregnancy was the scandal that it probably should be instead of the spectacle MTV has glorified it to be. But now, she has a choice. And readers agonize right along with Sandy as her life is turned upside down, and is ultimately on her own as she faces the biggest decision of her young life. Sandy has family, but it really is her choice to make, and she really is alone in having to decide.

Fast forward 30 years--Sandy's choice shaped her life in a lot of ways. And the pain is still front and center when one of the students at the school she teaches comes to her. Sandy tries to help the young pregnant girl as best she can given the restrictions she has as a teacher. And let me tell you, part of those limitations and how her hands are tied will infuriate you.

In comes Sandy's need for a lawyer. As Sandy helps Maria, she is faced with the choice she made long ago in ways she never imagined. As you read, you'll find yourself going through all the same emotions that Sandy is right along with her.

And if you can make it to the end without tears in your eyes, you just may not have a heart. 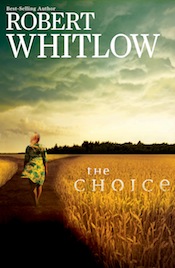 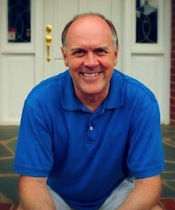 One young woman. Two very different roads. The choice will change everything.

Even as a pregnant, unwed teen in 1974, Sandy Lincoln wanted to do the right thing. But when an ageless woman approached her in a convenience store with a mysterious prophecy and a warning, doing the right thing became even more unclear. She made the best choice she could . . . and has lived with the consequences.

More than thirty years later, a pregnant teen has come into her life, and Sandy’s long-ago decision has come back to haunt her. The stakes rise quickly, leaving Sandy with split seconds to choose once more. But will her choice decision bring life . . . or death?

Robert Whitlow is the best-selling author of legal novels set in the South and winner of the prestigious Christy Award for Contemporary Fiction. A Furman University graduate, Whitlow received his J.D. with honors from the University of Georgia School of Law where he served on the staff of the Georgia Law Review. A practicing attorney, Whitlow and his wife, Kathy, have four children. They make their home in North Carolina.

For more about Robert and his other books, visit www.robertwhitlow.com.


Win a Nook Color from Robert Whitlow in The Choice Giveaway. RSVP for 8/28 Facebook Party. Celebrate with Robert by entering to win a Nook Color with GlowLight!

See what folks are saying about The Choice!

One "choice" winner will receive:
Enter today by clicking one of the icons below. But hurry, the giveaway ends on August 27th. Winner will be announced at the "The Choice" Author Chat Facebook Party on 8/28. Meet Robert, get a sneak peek of his next book, try your hand at a trivia contest, and more. There will also be gift certificates, books and a Book Club Prize Pack to be won (10 copies for your book club or small group.)!

So grab your copy of The Choice and join Robert on the evening of the August 27th for a chance to connect with Robert and make some new friends. (If you haven't read the book - don't let that stop you from coming!)

Don't miss a moment of the RSVP today. Tell your friends via FACEBOOK or TWITTER and increase your chances of winning. Hope to see you on the 28th!

For more reviews, keep up with The Choice blog tour here!

I received this book from Book Sneeze in exchange for a review. The book is also one of the books we are promoting at Litfuse Publicity Group.
Abortion adoption Book Sneeze Robert Whitlow The Choice Thomas Nelson