Don't make me put a note on your car!

August 06, 2012
Anyone who pays any attention to me on Facebook knows that I'm not the best of friends with my neighbors. If the kids next door aren't banging on the walls, it's probably something else.

Before I started working from home, I could probably check my mail a couple of days a week and be just fine. Most, if not all, of my bills are e-bills. I don't shop Fred's so I don't need those coupons. Unless it's VBS, I don't need 3 Oriental Trading catalogs a week (I finally went long enough without ordering that they slowed way down in frequency. I just ordered again, so I'm sure they'll pile up again.) My birthday only comes once a year...

Now that I work from home, I get books. Often. One time I got 5 books in one day. I also get a paycheck in the mail, so I check the mail much more often. Sometimes just to stand up and walk away from the desk.

Over the past few weeks, I had a couple of packages marked with a date and "box blocked" on them. Well, that would be because the neighbor with the kids that bang on the wall parks too close, if not in front, of the mailbox. This means the mail person cannot drive the truck up in front of the box for the 4 duplex buildings/8 apartments. That means he won't deliver mail.

Fed up knowing that I had not received something that I was supposed to, I finally put a letter on the windshield last Friday. 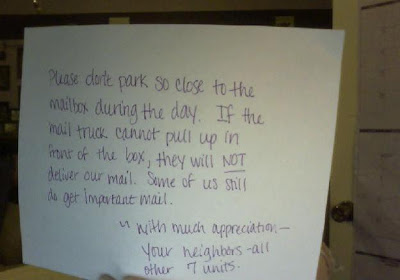 I did not go talk to the neighbors because these are the ones with the kids banging on the walls after I've gone over there more than once. And I've been over there when I had water in my bathroom because it came from under their wall. (I needed to make sure it was coming from there, and/or they knew it.) I'm sure they know it was me though.

Today, I noticed they were good neighbors and were parked pretty much in front of my house instead of the mailbox.

Then, there are the other neighbors on the other side. The Three's Company neighbors. Except the 2012 version. Jack has gauges while Janet and Chrissy have more facial piercings than I've been able to count.

They are always having people over that park in front of my back gate. Of the 8 units here, I honestly have the smallest section of pavement to park on. If I was not the only one living here, a second car would have to park in the grass. There's also a light pole next to where I park which blocks park-able area.

Anyway, Jack and company always have extra people over and park in front of my gate. I'm tired of it. Someone parked in front of my gate (Jack's girlfriend) was the reason why the guy came up to my back porch and knocked at 4 AM a couple of months ago.

This is how close the truck was to my back gate yesterday when I tried to get out to go to church. 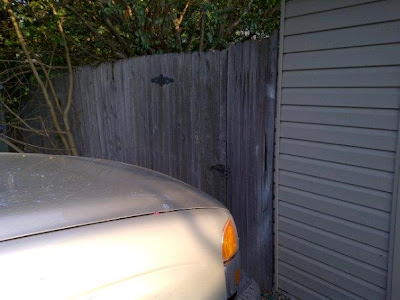 I could barely open the gate without hitting the truck - because I could have hit the truck. But the thing is, this is not his house, rented or otherwise. I also had to try to get in with an armload of groceries yesterday after church. I knew the truck did not belong to Jack, Chrissy or Janet.

I did not want to go knock on their door because I did that when I went to confront them about drunk friend who didn't need to go knocking on doors at 4 AM (although they totally agreed on calling the cops since they didn't know who it was - supposedly).  I also yelled out the back door at almost 2 AM on a week night when they were partying too loud one time. (Jack did come apologize for that. One of his buddy's had turned 21, so they were drinking, I mean partying.) So I left a note on the windshield asking that the truck not be parked in front of my gate so that I could get out.

No movement in the note or truck all day yesterday. At 2 PM today, I walked out there. Still there. I went to go talk to the neighbors. The girls didn't know who's truck it was because no one was there except for them at the time, and they never go out back because they park out front (not exactly true because one of them is parked out back now).

A few minutes later, Chrissy comes over that they called Jack and he guesses the truck is Larry's. But Larry is at work until like 6 (how did Larry even get to work?). However, she did call Larry and told him to move the truck or she was going to call to have it towed. Or I could call and have it towed if I wanted to. (I was really busy today and hoped it didn't come to that.)

Sometime after that, the truck was moved.

I'm not sure if I'm just a cranky neighbor or if my neighbors need to respect the space and people around them. I want to get my books in the mail and be able to get to my car and be able to pull in and out.

Whatever the case, people are going to start recognizing my purple pen and handwriting.
Three's Company