I thought the blog needed a new springy update. What do you think? I did that after spending two hours replacing photos in entries dating back to December. I blame taking photo URLs from Facebook of photos synced from my phone. Knowing Facebook, they probably moved them all around. I uploaded as many of the original photos as I could and did Flickr URLs on the others I deleted from my phone.

The paint buckets are currently appropriate. Not sure if I will get painting done this weekend or not. Dad said we would help me cut in so I wouldn't have to tape all the trim up.

I am not sure how that will work since he told me last weekend that he was not volunteering to help because he was so messy. He must have taken pity on me after witnessing my sweaty exhaustion after 7 hours Saturday and helping me take down tape and touching up Sunday.

Today he was over trying to seal the bottom of my storage building. I think my move has been good for him. It has given him some things to do. Next up... Rolling up what he calls the world's longest water hose. I don't know why I bought one so long. You can't see half of it in this picture. He laid it all out in the yard to get the kinks out and show me how long it is.

I am enjoying the sounds of spring. Today when I opened the upstairs doors, not only could I hear all varieties of birds and squirrels chattering, I could hear the sounds of tennis balls against rackets and the ping of a baseball bat. You can see soccer fields, base all fields, the tennis courts and park from my house. Much more pleasant than the wallbangers, the dog who sounded like she was being torture nightly and the train right smack behind the house.

Only being about 3 blocks away, I still hear the train some, but it's nothing like before. I saw Jack the dog co-owner when I went out to eat with a friend who was driving through town. I sure didn't tell him I missed living next to him. He probably doesn't miss me either. He probably parks in my old spot. Good for him. ;) 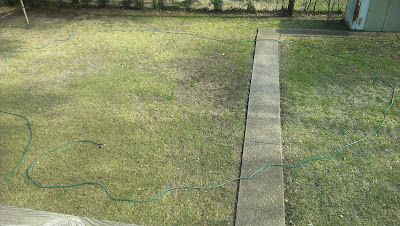