With Love and Affection

March 25, 2013
I'm either getting old, senile, psychic or all of the above. Psychic more in the "plan to write something and it seems like I did, but maybe I'm just planning it for the future" kind of way rather than predictive.

That said, I can't remember if I told the first part of this, so I'll tell this part again. Maybe I shared it just on Facebook. Anyhow!

A couple of weeks ago, I was actually getting the local paper because they were making it free to "new residents" or maybe just people who moved and had a new address. I don't know if the City of Corsicana water department sold them a list or if they are in cahoots with the postal service or what.
Whatever the case may be, I got a newspaper in the mail (because they mail them which makes it less than news when it arrives, but I digress).

On the front page on this given day, there was an article about Matthew and Gunnar Nelson performing at the Palace Theater in town. They are touring the country doing a Ricky Nelson Remembered tribute show in honor of their father.

To most people, this would be a non-event. This is Corsicana, TX, after all. There's not a lot that goes on around here. It's the land where little things seem more impressive. However, when I was in 8th grade I loved the rock group Nelson and had a poster of the long-haired twins on my wall. This was a blast from my past.

I called my mother, who bought me their cassette when I was in jr. high and well saw this poster on my wall and asked her, "why didn't you tell me Nelson was going to be at the Palace?"

"Yeah, I saw that," she says un-enthusiastically. "Somebody was talking about that or..." Whatever her response was, it was rather blah. Fine. Be that way. I left a message for Jenny. I figured she would find this information the least bit interesting.

Later that afternoon, Dad came over to help me inspect my painting job of the living room. I tell him, "I called Mom about this thing at the Palace and got the lamest response."

"You need to take your mother. She wants to go, but I don't care anything about seeing it."

The next night at church, I ask Ruth Ann about going. Her husband Bronny wanted to go to. They liked Ricky Nelson. My dad just short of pouted because he couldn't care less and wanted to go with Bronny down to Palestine to the Jamboree. As if that isn't the same every time they go.

I want you to know, that I firmly believed I had my Nelson poster at my house when I moved a plastic tube with posters in it. I believed it held my New Kids on the Block door poster, my MC Hammer poster that Jenny gave me once upon a time, and my Nelson poster. By goodness gracious, I was going to have it signed.

What I had in that roll was Disney posters and some from the Wizard of Oz. ARG. If I had found it and gotten it signed, it may have had to have actually gone back up on the wall in my office. Just saying.

They asked the audience who watched The Adventures of Ozzie and Harriet. Then who listened to Ricky Nelson, their dad. They followed up the question by, "who remembers us?" There were about 4 of us younger than 40 in the audience that were quite loud.

I won't say that I'm a big fan of Ricky Nelson's music, but it was an entertaining show. They were funny. (I liked the joke about how they looked like waiters in a Mexican restaurant in Sweden when they were wearing black shirts with white trim on the shoulders.) It was especially good considering it was just two guys on guitars. Of course, they are rock guitarists that were invited to play for other artists when they stopped touring with their own group.

Although they said that until recently they never play any of their own music in the shows, they did work in a verse of "Love and Affection" which was enough for me. At least it was something.

I think that's me hollering once. I think I was otherwise quiet to be able to hear. There were two women about two rows in front of me, a little bit younger than me that were especially vocal.

Afterwards, the two girls I just mentioned had to touch up their hoochie make-up before descending from the balcony since they told everyone they would sign autographs.

I was standing there, when my mom made her way up to ask, "have they gotten up here yet?" Right as they were passing by her shoulder. Her good eye side at that. "Uh yeah, right there!"

I did tell Gunnar that I couldn't find my poster, but at least I had my cassette. "Rockin' the cassette! Oh, yours gets 'with love and affection.'" Everyone else got "love" on their stuff because they were over 60 and didn't get the reference. There were all of these old women wanting to get an autograph and gushing over how great the show was. They are the ones who have never heard "After the Rain."

Ruth Ann told me she was mad at me because I didn't get her program signed. I told her she should have gotten in line.

Really, and truly, I'm not one to get star struck. {My previous boss told me that was why I was good at my job... in her words something like, "you don't care who anyone thinks they are." They never had to worry about me making a fool of myself for an autograph. It's why I got to tend to the Duggars while my co-worker was ticked off at me for not introducing her to Michelle, and left the media room unmanned against direct orders from the bosses.}

Even though I don't get star struck, the 13 year old girl from 23 years ago still thinks it's pretty cool that Nelson signed her cassette cover (even if they were only a big deal for like a year). It's the coolest thing that's happened to me in Corsicana in a long, long time.

When I showed my nieces, Peyton said, "are they boys or girls?" which I kind of expected. Paige thought it was pretty awesome which is what I was going for. Her response did not let me down. 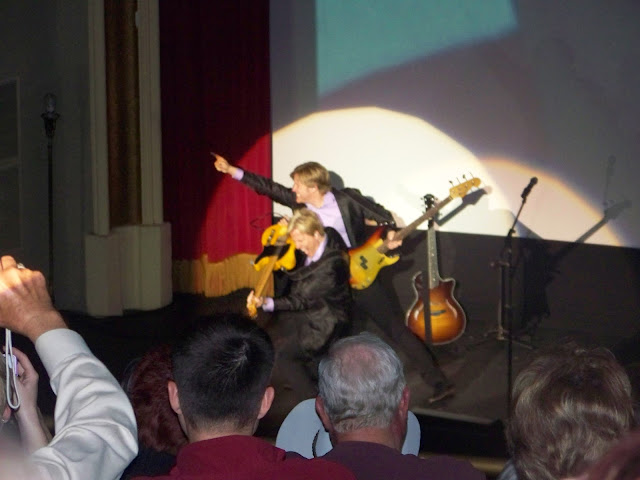 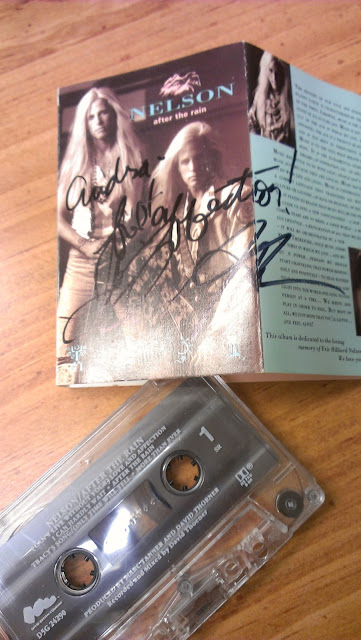