May 24, 2014
I tried to beg any friend on Facebook who might be willing to join me for Cracker Barrel and Hobby Lobby today. However, it was to no avail.

I have some weekends were I just really need out of the house (even though I did get out last weekend). Working and living in the same place, by yourself, can cause cabin fever. I always tell people that working from home is better for people with families than for single people. Anyway...

My parents skipped town with their friends, so Mom wasn't around to go with me. I'm so tired of wearing the same stuff around the house, and I seriously thought about wearing a shirt I've had since 2006 today. I took that as a sign to try to find stores having Memorial Day sales. Lane Bryant had a buy one get one free sale. Besides, I can only wait so long to find shoes to wear in Atlanta for ICRS (the International Christian Retail Show), and I leave in less than four weeks. I need shoes that minimize my feet hurting as much walking as there will be in the convention center.

So, between last weekend and this weekend, I bought four pair of shoes to take. (I hit the Sketchers outlet today!) One was more of a "just because I can get them 50% off choice." Granted, they may be a bit casual for the dresses I bought in March on my last shopping spree, but you wear comfy shoes when you go to ICRS.

What do you think, other than stating how bad my phone camera is? I think it's getting worse by the day. 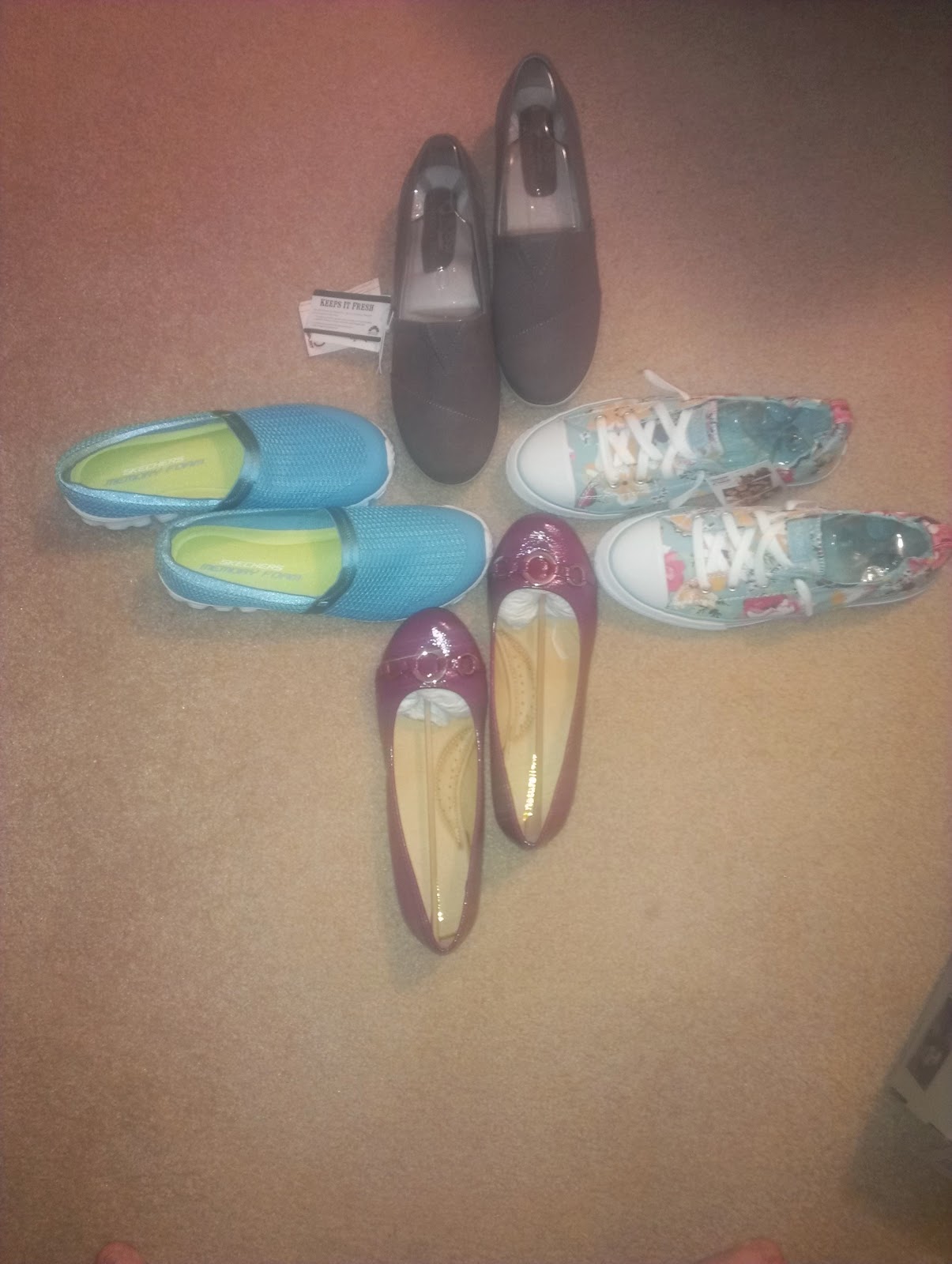 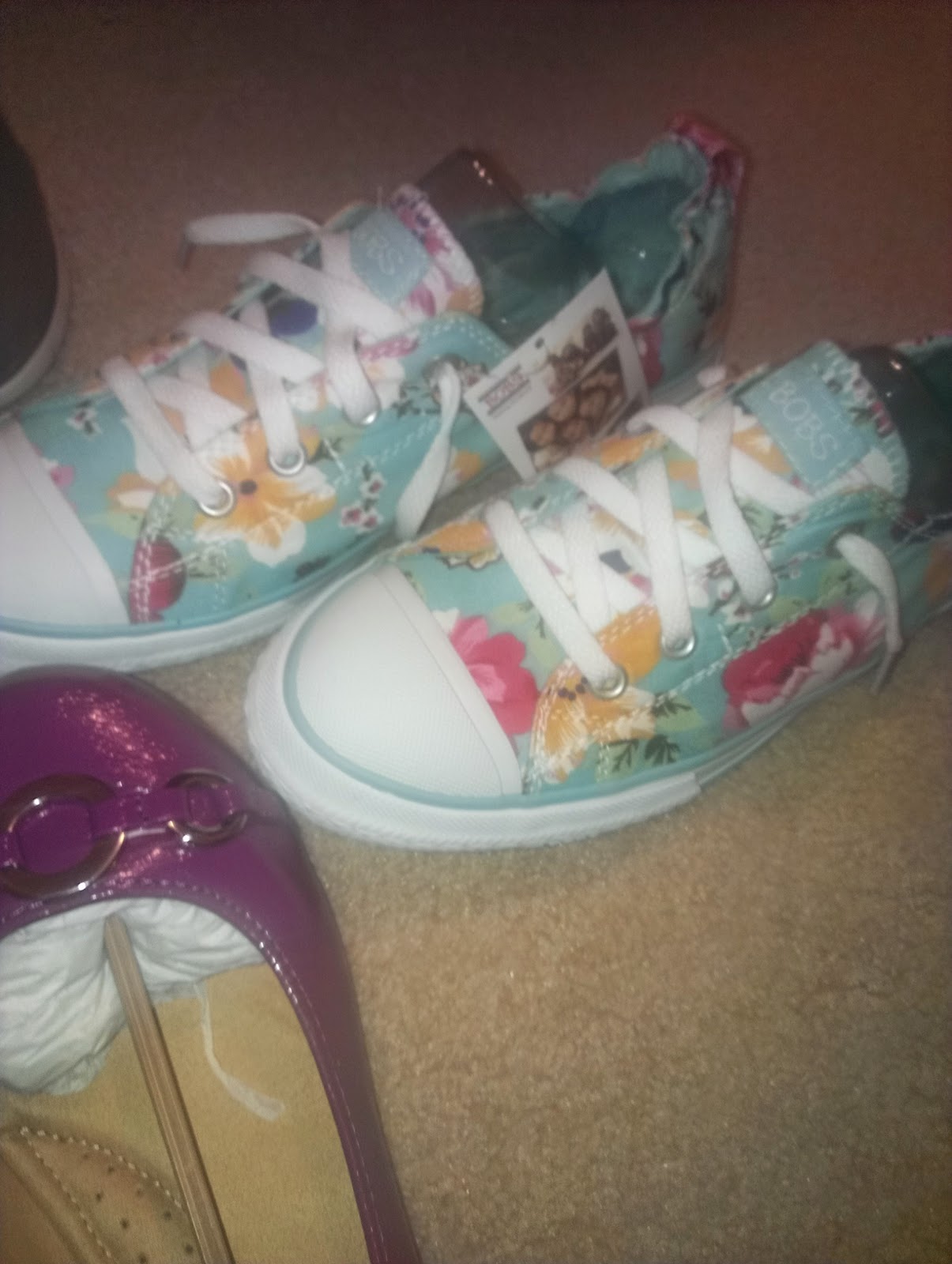 The sales girl at the Sketcher store was HORRIBLE. She told customers she didn't want to work more than she had to. That was stating the obvious. She had to climb a ladder to get shoe boxes because half the shoes were up high. Even if you saw the box on the shelf that you wanted, she would doubt you, and double check before climbing up because she didn't want to exert the effort for nothing.

She was also downing some of the shoes they sell. I said I didn't stand all day everyday since I work from home so I wasn't so worried about only buying the shoes with memory foam. Basically, she was close to talking me out of shoes that I was about to buy. I can wear these shoes places without my feet hurting, memory foam or not. She said she couldn't wait to work from ho me because she was a writer. This is one of those times when you roll your eyes and hear Alanis Morrissette singing "isn't it ironic?" in your head. I dared to say, "I work with authors." I should have kept my mouth shut. This is when she became attentive and decided she was destined to meet me and help me buy shoes.

She writes sci-fi fantasy that is definitely not Christian and is a member of some religious sect that's of a unity variety that sees Jesus as a teacher, but not a savior. Maybe this was a teaching moment, but I just wanted to end the conversation and pay for my shoes. We mutually decided we weren't so destined anymore.

I did go to Cracker Barrel, Hobby Lobby and Starbucks too. (Oh my goodness, the Starbucks in Waxahachie disappointed me with a sub-par Salted Caramel Mocha Frappachino - too much mocha, not enough caramel. I get, though I don't know why, they don't have the salt to sprinkle on top except for in the fall, but why did the barista say he didn't have all the ingredients though he could make it taste the same? It did not taste like it should, and it had no caramel drizzle. I should have gone to the one in Target, but I didn't want to park at Target and go in. They could make it better there.)

It's everyone's loss for not going with me for the day though.

Oh, here's a bonus. We have a family joke about seer sucker suits. It's actually a two family joke. I found this in Lane Bryant today. I DID NOT buy it. I wouldn't dare. But, I had to take a picture of it. Can you imagine how bad I would look in this?

I'll also use it as a lesson... DO NOT wear this pattern on TV. It will vibrate on screen. NO small patterns on TV. No small stripes. Solids only. I have to give this speech when I talk to authors about wardrobe choices on TV. This still may be better than the hounds-tooth suit one author when I picked him up at a hotel for an interview one time. 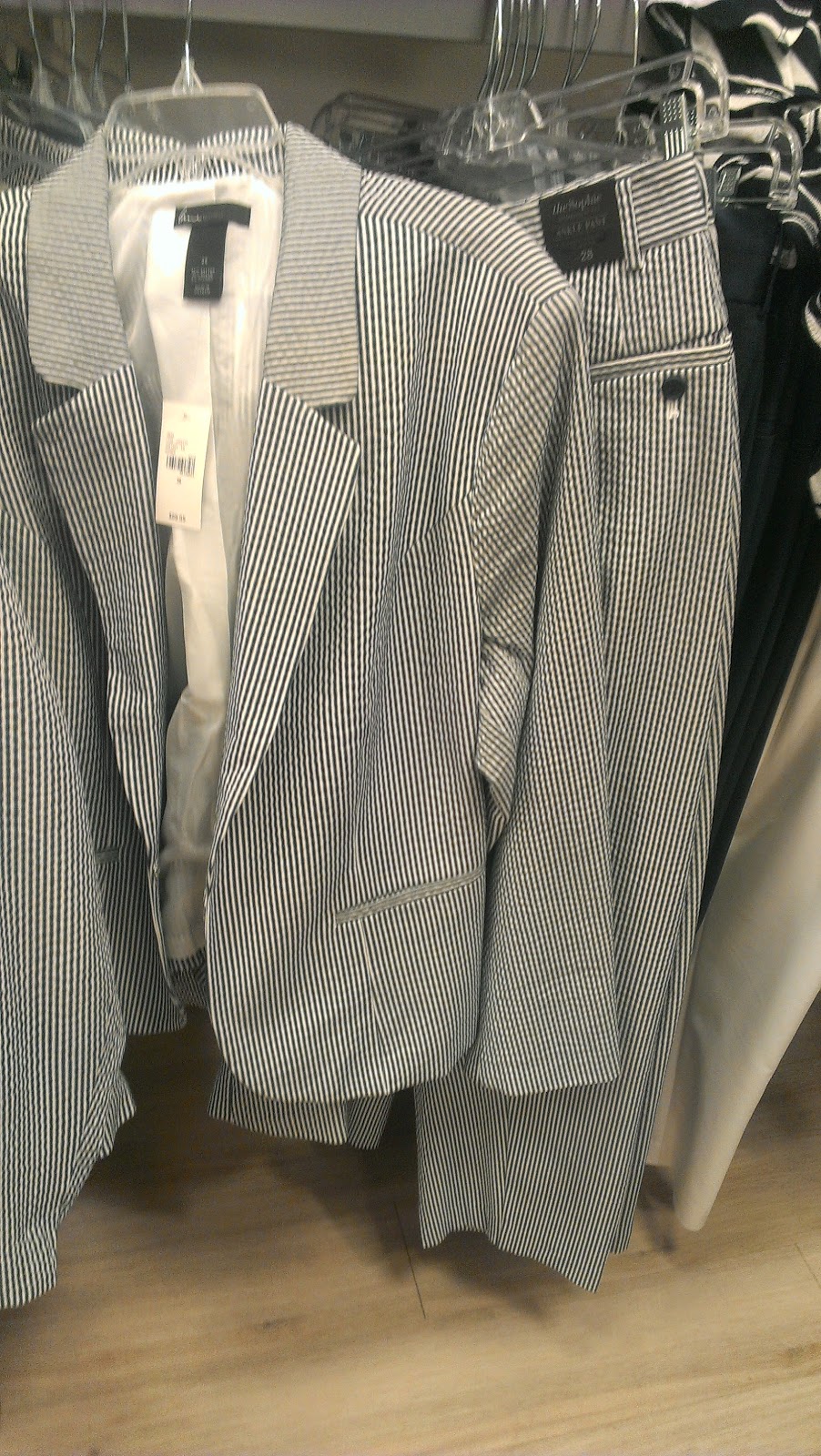