Now, before you decide to flog, tar, and feather me, remember that I am a book hoarder. In my old age, you will find me buried in a stack of books. However, I promise there will not be dead cat skeletons, rotten food, and dirty adult diapers littering the house like an episode of Hoarding: Buried Alive.

The house might be dusty, and I may have dirty dishes in the sink, but my hoard will be new or very gently used paperbacks.

My filth level is not the point of this blog though.

I never go to the library because I have more books than I can read in a decade, possibly longer, within my possession. Now, when my mom retires, she may go through the e-book hoard on her Kindle that I created for her plus my paperbacks.

However, a couple of days ago, I decided to go to the library. I've been running so terribly behind on some things at work and desperately needed a change of scenery to buckle down and focus. I needed a quiet place. While I actually wanted to be disconnected from the world, I needed access to wi-fi in case something came about that I needed a connection for since I was randomly checking emails on my phone.

In this town, there's only so many places with wi-fi. There's Whataburger. I think Dairy Queen does now. Definitely Home Depot - I could have set up at a patio table in middle of the store. There's not a Starbucks in this ridiculous town. There may or may not be wi-fi at the slot machine coffee shop, but I don't hang out there for long given the shady characters that come in to play the slot machines.

The last time I went to the library, I fled rather quickly because there was a rather loud child with a rather loud parent across the building that annoyed me to no end.

Yes, I'm one of those old people who think children shouldn't run around the church building and ought to keep quiet in the library.

But, I decided to try it again. I am glad that I took care of syncing some email and making a phone call before I left the house because the Corsicana Public Library does not open until 10:00 AM and the first time I've been early to anything recently was to the opening of the library for the day. I thought surely it would open before then. I was wrong.

When I came in, I picked up the password of the day. It's free wi-fi at a public library. I don't know why they have to have a DAILY password. I could understand a WEEKLY one.

What I really don't understand is the need for the explanation of the password underneath. It's not like it's being read out loud. Besides, if a person isn't bright enough to figure out the letters, they sure as heck won't know what quebec, delta, lima is. 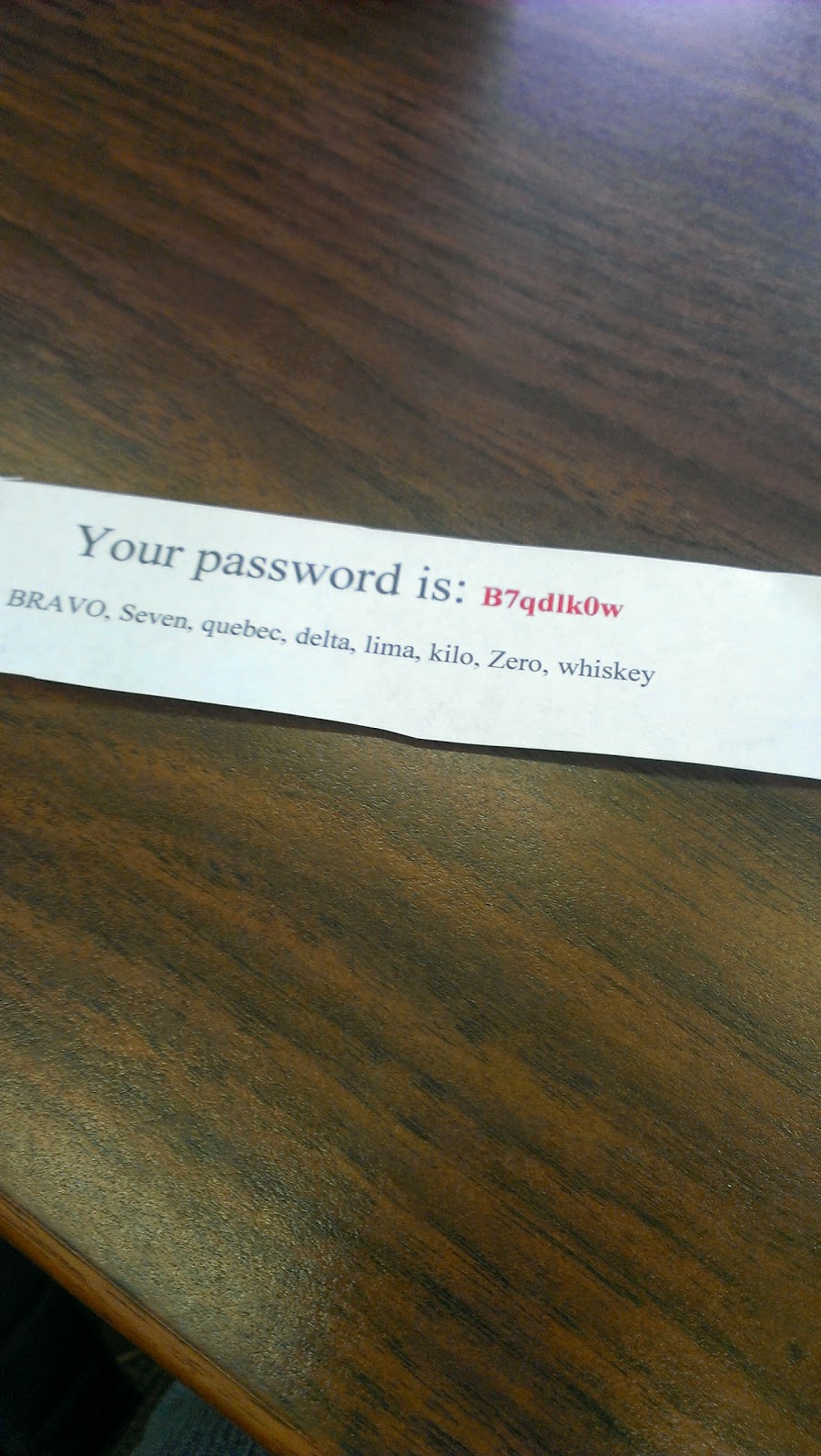 After working a couple of hours, my computer battery was almost out and I had to move from my quiet spot towards the middle of the building. There are literally only two tables in the building close enough to an electrical outlet to have a power strip to plug in your computer. Most people at the library these days who spend any time there have a laptop. Not exactly convenient.

I had to share a table with a grumpy lady working on genealogy. I thought we were going to have to have a third person join the table, but she went to the other table close to a column that had an outlet on the side.

I didn't like this spot because it was closer to the kids' section where a child was playing with a wooden toy that was not the quietest thought it wasn't loud. This little boy also talked to himself. I was distracted. Shhhhhhhhhhhh!

Then the woman who went to the next table did not turn the volume on her phone off. She obviously chose to ignore the signs on the door asking patrons to turn their phones down. And oh my goodness, her phone was so much louder than mine has ever rang. And her text message notifications were so loud. She kept getting texts. I'm sure it disturbed the guy across the table from her. I'd have a really hard time biting my tongue if I were across from her.

I finally left after about three hours because I really did need to send some email and the good 'ole AT&T (you know how I love them) Hot Spot amazingly slow internet connection jammed up my outbox where I wasn't being productive anymore.

Overall, it was a productive morning, but I probably can't/won't go back soon. School is almost out and I can't handle all the parents that won't make their children behave in public. Parents. They're worse than the kids because they don't teach their kids what is and isn't ok. Sometimes, they are worse.

Yes, yes, I am that grouchy old woman.