August 03, 2016
Plunge into forensic artist Gwen Marcey's world, full of cold-case murders, shady politics, and a den of venomous suspects. Add Carrie Stuart Parks' new Gwen Marcey novel, When Death Draws Near, to the top of your must-read list. Gwen accepts temporary work in Pikeville, Kentucky—a small town facing big-city crime. But before she can finish her first drawing of the serial rapist who is on the loose, the latest witness vanishes. Just like all the others. Can Gwen uncover the truth—and convince anyone to believe her—before she becomes a victim herself?

Join Carrie in celebrating the release of When Death Draws Near by entering to win an Undercover Artist Starter Set.

Enter today by clicking the icon below, but hurry! The giveaway ends on August 22. The winner will be announced August 23 on the Litfuse blog. 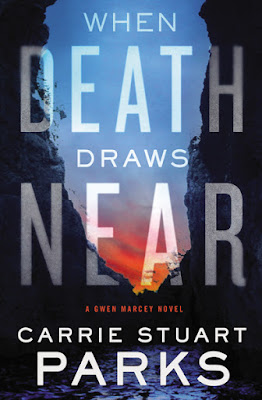 {MORE ABOUT WHEN DEATH DRAWS NEAR}

(Thomas Nelson, August 2016)
Death has always been part of Gwen Marcey’s job. But when faced with her own mortality, everything takes on a different hue.
Forensic artist Gwen Marcey is between jobs and homes when she accepts temporary work in Pikeville, Kentucky. The Eastern Kentucky town, located deep in the heart of the Appalachian Mountains, has been plagued by a serial rapist and a series of unexplained deaths. Before Gwen can develop a composite drawing, the latest witness vanishes, just like all the previous victims.
Turning her attention to sketching the face of an unidentified body, she discovers a link between his death and a Pentecostal serpent-handling church. Serpent-handling is illegal in Kentucky, and the churches have gone underground to avoid the authorities and continue to worship as they believe. Gwen is offered a handsome reward to infiltrate the renegade members, a reward she desperately needs as it seems her breast cancer has returned.
Joined by her digitally-obsessed, Generation Z daughter, Gwen goes undercover to a nineteenth century revival, planning to draw the faces of the snake handlers so they can be identified and arrested. Instead she uncovers a murderous plot and a festering evil.
Learn more and purchase a copy.

Carrie Stuart Parks is a Christy finalist as well as a Carol award-winning author. She has won numerous awards for her fine art as well. An internationally known forensic artist, she travels with her husband, Rick, across the US and Canada teaching courses in forensic art to law enforcement professionals. The author/illustrator of numerous books on drawing and painting, Carrie continues to create dramatic watercolors from her studio in the mountains of Idaho.
Find out more about Carrie Stuart at www.carriestuartparks.com.
Carrie Stuart Parks giveaway Gwen Marcey Thomas Nelson When Death Draws Near