No one on #bachelorinparadise really knows what they want 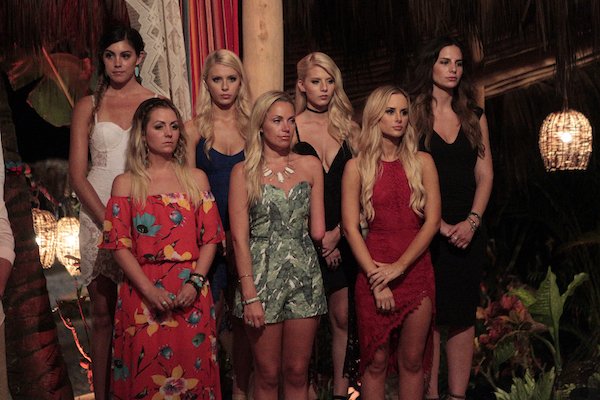 So, we start the evening right where we left off. Evan is wandering the beach after being Friend-Zoned by Carly. So he made himself a date card, and walks in to break up a full fledged make-out session between Josh and Amanda. Josh is laughing at what a lame move this was.

Evan and Amanda go off to the treehouse Evan has set up for his special date. It's 50 shades of awkward. Evan confesses that he came here for Amanda, he respects Josh fully, but wants to see if she thinks something might could possibly happen.

Jorge feels sorry for the very bored Josh, I guess and brings him some pizza.

Amanda tells Evan she was surprised by him the first week, but wants to give Josh and that relationship her full attention. Evan says he understands, but couldn't walk away without a rose, wondering "what if."

In his own camera interview, Evan talks about interrupting the "makeout sesh." Really going to call it that? The idiot still sees a glimmer of hope.

When Amanda gets back to Josh, he's having his own enjoyable experience with his pizza and is less than sympathetic. Now Amanda is going to be tasting it secondhand. Gross.

To hear Evan's version as told to Jared... Evan says she was crying and had planned to take him on a date. Jared buys it. What a weasley liar!

The next morning, Izzy is using someone else's make-up and Daniel shaves Vinny's hairy back. Grooming is hard.

Fast forward to that night (actually, who knows the real timing of any of this) ... Time for a cocktail party pre-rose ceremony. There's some wild cards tonight. Seven women with roses and nine guys vying for one.

Christian wants to make sure he's still good with Sarah, and they discuss the "most wonderful night ever." After exchanging a kiss, Daniel comes up and tries to get back in her good graces. Daniel makes her smile, but Sarah tells the cameras that he has to kiss her tonight to be in the running for the rose. He doesn't make his move before a bee bites him on the chin. She pulls the stinger out, and he kisses her, but "it wasn't the best kiss."

Oh Brandon. I forgot he was there. He thinks he's with Haley, but is she really? Haley tries to explain their differences. It boils down to ear piercing and moles on the right side of their faces.

Evan interrupts Amanda and Josh AGAIN. He wants to talk to her one more time. Daniel and Sarah watch and are trying to will him not to do it. Someone told Evan about the book Andi wrote and what she said about Josh. As a dad trying to protect a mom, he wants to address the emotional and verbal abuse part and warns her to be careful. Evan has been lying tonight, so I don't know if that's really in the book or true. Amanda gets a little concerned, so talks to some of the girls, and Lace says, "we've told you to be careful."

Lace then goes and talks to Grant about Evan trying to get in Amanda's head. Grant was going to go talk to Josh when Lace realizes that Josh was right there. Josh goes to Amanda and she says, "I know what's going on, and I don't think it needs to be talking about."

Josh decides to take Evan aside. He doesn't want people talking about him behind his back. Josh tells him he shouldn't be making judgments without even speaking to him. Josh is uber defensive. Evan doesn't think Josh feels real because his polish has polish. Evan wants Josh to be real to him and everyone else.

Evan admits never having read a passage. Josh says there were things that were untrue. Evan asks why he didn't sue for libel. Josh says he believes God has a plan. (People use that too often in circumstances uncalled for, but I won't go there.)

Evan needs to go. Sean Lowe also needs to give him the makeover he talked about last week on After Paradise that I finally got around to watching.

Nick decides to try to make another move on Amanda. Nick also didn't read the book though he knows what it says (especially about him as he stated last week). Nick said there were some inaccuracies about him, but Amanda needs to ask questions and beware because there were some unfavorable things said.

When Josh and Amanda talk, he says he thinks everyone is trying to ruin a good thing. It's going to be a long night. Finally, Chris comes in clinking his glass. Let's see how this shakes out.


Brandon (he was a moron anyway) and Christian (that one shouldn't have happened) don't last long in Paradise. Off they go!

The next day, Emily is super excited to be in the sheer presence of Jared. Oh, but Emily, watch out. New women are arriving on the scene.

Here comes Caila. She reads her date card, "Welcome to Paradise, it's time to get back in the saddle. Pick a date."

Caila says she's going to take the guys off. Nick and Jared talk about her unbelievable hair. Evan tries to take his whack first. Then, she talks to Nick. She's interested in seeing if Jared might be available.

The twins think Caila is too perfect, even in throwing a football. She asks Jared to talk and Taylor and Swift start stewing. Carly has spent two summers with Jared now, and she's never seen his face light up like it did when talking to Caila.


Emily is going to have a meltdown because Caila picked Jared for her date. But before they go, Jared tells Caila that first he went on a date with Jubilee, then he started connecting with Emily, so for that reason, before he accepts, he needs to talk to Emily first. Jared's a good guy. He tells her he really does like her, but the truth is, he doesn't want to regret not going. Emily says, "It hurts, but I get it and I really want you to go."

He tells Caila he would love to go, so they go off to get ready. Emily is a heartbreaker, not the heartbroken. She's never liked Caila for the "too perfect" vibe she gives off.

Jared and Caila go horseback riding down the beach, sip from coconuts and kiss in the glow of the sunset. He's falling for Caila and is going to have to tell Emily.

Meanwhile back at the house, Daniel, ever obsessed with belly buttons, puts water into or drinks water out of Vinny's belly button with a straw.

Everyone is watching the Josh and Amanda "Get a Room" show. A date card arrives.

"Izzy and Lace - Tonight is the first double date in Paradise history..." So off go Izzy and Vinny, Lace and Grant.

Carly is jealous. "When is it going to be my turn?"

When Jared and Caila return, they share what they did with the group. Emily didn't get acknowledged, so she's about to have a meltdown. Jared comes back to get her and talk. Before he has a chance to talk, Emily says she cares about him. A LOT. She doesn't want to force feelings. She tries to play it cool, but it doesn't really work, especially when he tells her that he wants to explore things with Caila.

Poor Emily. She thinks she's a good catch, but no one sees that.

So the double date... Vinnie professes how much he likes Izzy to the group. Lace thinks it's so sweet.

At the house, Carly and Sarah have Evan and Daniel over for their own double date. Carly only does it so she can get a rose this week. They decide to have a drinking game every time Daniel says something Canadian.

Daniel does push-ups with Sarah on his back. Evan can't do the same with Carly. With each moment, Evan thinks the door with Carly is easing back open. Daniel is trying to lead them to rekindle the magic. Carly his not taking that bait even though she talks about being creeped out one minute and strangely attracted to him another because she digs weird. She gives him a hug goodnight, but tells him she does not want a kiss. I say she's being a tease. She is leading him on, especially given he can't take a hint.

Later that night, the producer tries to wake Evan up, but can't get him awake. They call the medic to come check on him. The producers wake Carly and Sarah and tell them they cannot get Evan up.

They get Evan awake, and he seems normal, saying he doesn't know what is going on. He said he felt loopy all day and it might be medication. Carly asks if she is going to have to monitor him. She lays down on his bed, then kisses him. They're all evidently crazy drunk again.

Back to the double date. Speaking of drunk, after a series of shots, they go dancing in foam? Then there's dirty dancing on the floor and body shots. Some random girl threw ice water on she and Izzy, and the police and Grant had to keep Lace from going after her.

On the beach, woe is Nick. He's bored. Josh swooped in and stole a woman out from under Nick (perhaps literally) for a second time. By the way, no one needs to see what's going on in private rooms with the green night vision lighting.

The next day brings about new adventures. The twins talk to Daniel who say he may save them. Jared and Caila play poker. What is going to crash the day?

Ash Kardash. She's back and still in love with Jared. And that's where we'll start tomorrow night.
Bachelor in Paradise The Bachelor The Bachelorette