"Paradise" is a hot mess of epic proportions

August 02, 2016
A dramatic new season of Bachelor in Paradise. I don't know if I can really handle this train wreck. There's so many people I can't stand. And I'm not talking about Chad.

Honestly, the best part of this whole show is the opening sequence with "Almost Paradise" playing even though last season's was better.

How fast will the hook-ups start? 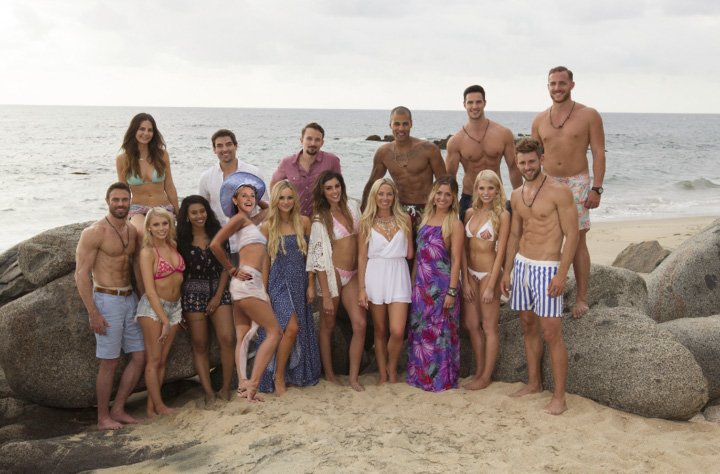 Amanda is the first to arrive and muses on how beautiful Mexico is, the weather is perfect, and she can possibly fall in love. In an effort to pair people from the get go, here is Nick who is trying to come in with no expectations. Amanda thinks Nick is a 10, but he might be a heartbreaker.

Jubilee is next on the scene. She got dumped by Ben in Mexico, so she's hoping it goes better for her this time. The three wonder who is coming next. They muse that it may be Chad. But it's not Chad. It's his arch-nemesis, Evan. It's a good thing Jubilee learned his name because I couldn't repeat her nickname for him. Jubilee and Amanda both think Evan looks better in person.

Here comes Vinny who was jut on with JoJo. Then Carly Wadell from Farmer Chris' season. Kurt broke her heart last season, so she's here to try again! She and Vinny have the same Zodiac sign or something so they bond.

Then come JoJo's Grant. The man is a little robotic. The shape of his head is weird.

The guys were talking about Daniel the Canadian, and POOF, he appears. He isn't impressed with the women there so far. He and Evan get to bickering early.

Everyone is talking about Chad. Most are looking forward to meeting him. They find him amusing. Everyone but Evan.

The bird population is kind of out of control. Sometimes the birds are the most interesting part. Think about Clare's raccoon.

Next to arrival is Sarah. As a reminder, she is the one missing part of her arm from Sean's season. She's back hoping to find love like Jade and Tanner did. Vinny thinks she's beautiful. Daniel wants to rank the girls. He's comparing them to bruised fruit.

The twins show up, and Jubilee and Amanda freak out. Now Daniel is impressed. They twins think he is interesting. They might fight over him. One of them goes out to the beach with him. The other watches and decides they are probably having the most stupid conversation ever and that Daniel loses points because he high fives her sister and she hates high fives.

Izzy arrives next. I remember NOTHING about her from her season from Ben's season. Daniel takes her out to the beach next. She's all for it because she thinks he is interesting.

Jared is back, and hoping that Ash Kardash is not here. Nick and Carly are excited to see him. Jubilee is trying to be more subtle. She doesn't make her move fast enough before Sarah does.

They trained the parrots of paradise to say, "he's coming," in an effort to make Chad's arrival ominous. Half the cast is excited. Half is petrified when Chad arrives. Daniel introduces him around. Izzy is turned on. Sarah is wondering if you peel away the layers if he might not be alright. Lace thinks there's an instant connection. The girls all think he's hot.

Evan is worried about when the real Chad comes out.

Chad is more impressed by the women than Daniel, but the two have their own bromance going on.

Chris Harrison comes on the scene to give them the rundown. Date cards. Roses. Pair up. The men have the power to hand out the roses this week, so at least one woman is going home. The twins count as one, so a rose to one of them means they both stay. Sounds like Ash Kardash and her sister last year. Guess she will be coming some other week.

Carly observes that it's kind of "high school dance" right now with the men on one side and the women on the other with no one mixing it up. They do muse in the groups about who they might ask out if given a date card.

Nick finds the first date card. It has Jubilee's name on it. She is interested in Jared which makes one of the twins jealous even though the twin says Jubliee is her best friend. (I seriously do not know which. Oh, it was Emily.) She goes out to find Jared who accepts the date.

Lace starts to bicker with Grant for some reason. I don't know. She mumbles. Then, Lace goes off to talk to Chad. She tells him she wants to see the soft side of Chad. He jokes about cuddling. Then they argue over who wears the pants. Everyone muses about the crazies getting together.

As I fast forward through the commercials, I realize sadly I am only through half the show.

Izzy finds it a little, no make that super awkward, to see Chad and Lace making out across the hot tub. They bicker, then they suck face, and back and forth. She gets slappy, then they're all good. Everyone is trying to listen to what's going on. It's the entertainment for everyone. They finally get out of the hot tub and go off somewhere else together. They must be drunk. They start calling each other to come over like you would a dog. Then, they head out to the ocean. They may drown.

Oh, I forgot. Seriously. There's a date going on. (I may be preoccupied or just have no attention span.) Jubilee has heard great things about Jared, including that he is nerdy. They get VERY NERDY in talking Lord of the Rings. They are sitting in middle of a ton of pinatas, and Jubliee freaks when a clown emerges from no where. It's odd.

Back at the house. Izzy and Vinny are making their moves on each other. He told himself he wasn't going to go all in the first night, but... He was going to save his kissing, but... so much for that.

Lace is super upset, but giving Chad looks from 6 feet away. Lace decides Chad is super mean. He comes back up and asks her to go to the beach.

Nick's best line was, "It's like God called it in the day he made Chad. It's like he didn't have his heart in it." Let's just say everyone is shocked for lack of a better word at Chad's behavior.

By this point, Chad is hammered. Daniel tries to have a conversation with him and tell him people are scared of him. He walks of growling then plops himself down to sleep it off on the ground behind most of the group. Sarah decides to tell him off because he's so awful and disrespectful in how he talks about women. Sarah says he needs to go or she will because she didn't come for all this to happen. He makes an awful one armed comment.

Everyone storms off in their different ways. Evan tries to talk to Chad, and Chad keeps shoving him off. Even is amazed at how he went from trying to make up with everyone and be a nice guy right when he arrives, then flips a switch and gets so aggressive. Daniel makes no progress as Chad slurs on about wanting to make out with Lace. Chad tries to get slappy with Daniel. Even Daniel thinks he needs to leave.

Chad finally passes out and starts snoring. He's so out of it that a crab starts climbing on his head.

The next morning, everyone is still musing over Chad. Who knows what happened on Jared and Jubilee's clown date.

No one wants to talk to Chad when he shows up where everyone is gathered by the pool. I don't think anyone is going to accept his rose when they are handed out.

Chris Harrison calls everyone to come up to the rose area. He calls it something, but I have no idea what.

Lace decides Chad is like the old version of Lace, messed up. Well, she was the old Lace last night too.

So, Chris tells everyone he heard some things got out of hand last night. Chad blows it off. Sarah calls him out on what he said about women, to Lace and to herself. Chad says, "she didn't seem to mind" in reference to Lace. Lace disagrees.

Nick speaks out against Chad. Nick points out that people were interested in getting to know him, but he gets drunk and mean.

Chris calls Chad out on being rude to everyone there, to the staff at the resort, etc. because of what was caught on video. Chris said everyone was there for a second chance, including Chad, but he turned paradise into hell. Chris tells Chad he is sending him home.

Chad can't believe it. He says he's not going to walk off. He's just going to sit there. He looks at Lace and blames her, asking if she is mad that he was talking to other girls. Completely random.

He thinks everyone else is being petty over "a few jokes," but the guys such as Vinny defend the women. Chad takes off his microphone pack and slams it down. He leaves a shoe behind. Now he notices crabs everywhere.

Sarah's golden remark is "bye Felecia." They all think he needs some help. Maybe it has to do with his grief over his mom.

The crew is trying to get him away from the set. He's off mumbling and accusing Chris of not actually watching what happened. He tries to fight Chris Harrison.

Previews of next week: Chad wrecks the place before he goes home.

Oh, snap. This is going to be an every Monday and Tuesday thing. I think they did that before, but I forgot. I need to rearrange my blog schedule!