August 05, 2016
A recipe for love and loss, merriment and mayhem, fun and faith in the backwoods of the Pacific Northwest can only be found in Fetching Sweetness by Dana Mentink. It should have been so simple for Stephanie Pink: Retrieve a reclusive author's valuable new manuscript and be promoted to a full-fledged literary agent. But when the author's canine companion, Sweetness, makes a break for it and Stephanie has to track Sweetness down, she meets Rhett Hastings. They’re in for a surprising string of adventures and misadventures.

Celebrate the release of Fetching Sweetness with Dana by entering to win the Sweetness Unleashed Prize Pack!

Enter today by clicking the icon below, but hurry! The giveaway ends on August 24. The winner will be announced August 25 on Dana's blog. 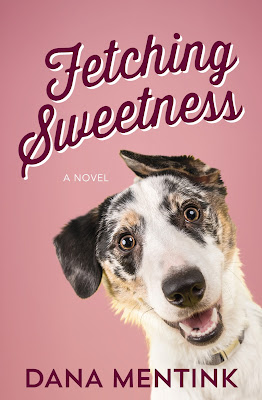 (Harvest House, July 2016)
Standing between Stephanie and her dream is one hundred pounds of lovable trouble.
It should have been so simple for Stephanie Pink: Meet up with Agnes Wharton in a small town in California, retrieve the reclusive author’s valuable new manuscript, and be promoted to a full-fledged literary agent.
But Agnes’s canine companion, Sweetness, decides to make a break for it before Stephanie can claim her prize. Until Agnes has Sweetness safely back at home in Eagle Cliff, Washington, Stephanie will never set eyes on the manuscript she needs to make her dreams come true.
When Stephanie tracks the runaway mutt to a campground, she meets Rhett Hastings—a man also on the run from a different life and a costly mistake. Rhett agrees to help Stephanie search for the missing dog…thus launching a surprising string of adventures and misadventures.
Once Sweetness gets added to the mix, it’s a recipe for love and loss, merriment and mayhem, fun and faith in the backwoods of the Pacific Northwest.
Learn more and purchase a copy.

Dana Mentink lives in California, where the weather is golden and the cheese is divine. Dana is an American Christian Fiction Writers Book of the Year finalist for romantic suspense and an award winner in the Pacific Northwest Writers Literary Contest. Her suspense novel, Betrayal in the Badlands, earned a Romantic Times Reviewer’s Choice Award. Besides writing, she busies herself teaching third and fourth grade. Mostly, she loves to be home with her husband, two daughters, a dog with social anxiety problems, a chubby box turtle, and a feisty parakeet.
Find out more about Dana at www.danamentink.com.
contest Dana Fetching Sweetness Harvest House prize pack