January 03, 2020
I FINALLY have my Christmas decorations all taken down and put out in the garage. As pretty as it all was, I'm just ready to be past it.

I say finally because it seemed like it was going to take me forever since I hadn't finished it off for this, that, or whatever reason. (Working late, too tired, procrastination...) However, it did come down faster than last year.

It didn't come down without a casualty though. I'm not even entirely sure how or why, but I broke my tree stand while pulling the fifteen strings of lights that were well wrapped around the branches. This picture doesn't even show the real angle it was hanging over in. I had turned the pole which I had done before to get to the branches in the back. This time, however, it broke the stand.

The pieces are too small to glue back and stay in place, and I had been looking around for that didn't have to be put together limb by limb, so most likely, new tree for me next year. 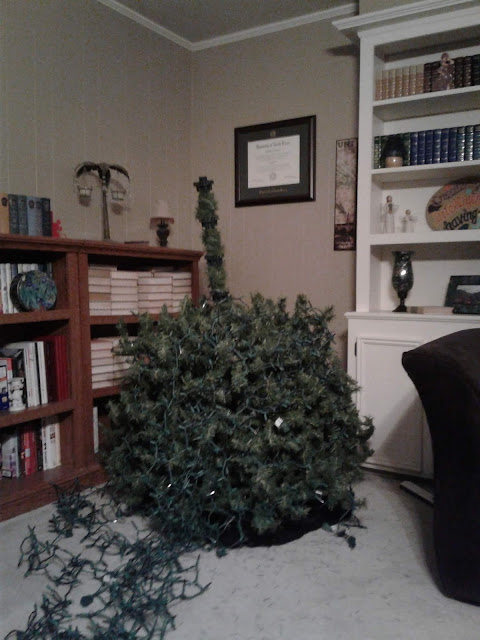 To get it all down and the strings bundled up, I also had to sacrifice my new in bed by midnight routine. The vacuuming up all the fake needles will have to wait until tomorrow. For the life of me, as many of those as I suck up both when I put it up and take it down, I'm amazed it is still as full as it is after something like 18 years. (See all of that stuff on the floor in the picture below?)

I must say, I miss the lights and garland at the top of the bookshelves. I thought that particular garland with lights and the birds, minus the Christmas balls still looked too seasonal.

Now, I'll look for something else to put up there. 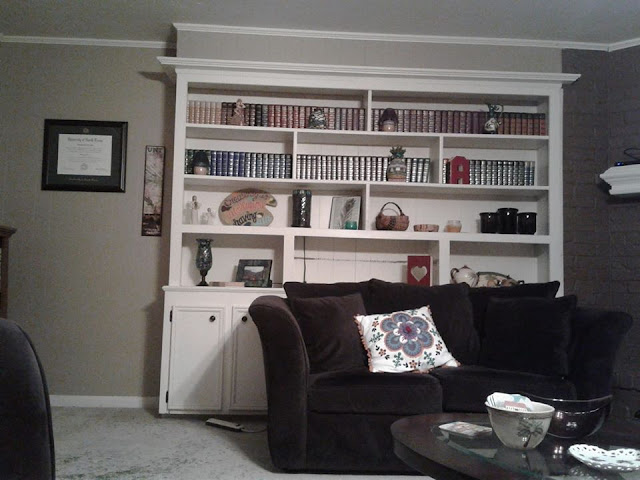 I've seen a lot of people on Facebook express the same kind of "glad to have it all put away" posts. I don't know if everyone just put it up too early (like all of those people who started on November 1) or what. It seems like people usually are sad to see it go. Maybe people are just being more honest.
Christmas decorations