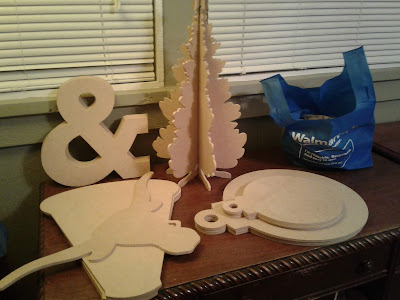 For the past several years, we've gone to Canton First Monday Trade Days in January to try to get a deal on some Christmas and other items we need for the next craft show season. It's kind of become a tradition of sorts, so I've marked it on my calendar and planned on it for a while. Depending on when the dates fall, I've been on New Year's Eve or Day. Regardless, usually on a Saturday, but this year, I wanted to get there before all the good stuff was gone, so we went on a Thursday --- the first day. I even worked some yesterday because I didn't plan to work today.

I had a list in hand of what I was looking for. We got there and the Build-A-Cross clearance tent wasn't there. This had happened to me before, but kind of thought it was because they moved pavilions, and I just didn't know it at the time. Well, this year, they knew it would be slow following Christmas and just didn't bring much over from Louisiana where they are based.

We scooped up what little they had for Christmas (that we wanted) at their main location and only found a little bit of the grab bag stuff we wanted elsewhere.

A lot of the vendors weren't open this time around. They have to be open on Thursday, so I don't think we just went to early. I think it's they decided not to be open this January.

As for that part, Mom and I will try again in April when we go back for hanging baskets and other plants. Hopefully, we'll have better luck then. I'm supposed to text the guy in charge of their booths to let him know what I'm looking for so maybe they will bring it.

While there, I went into the Dish Barn aka the Fiesta outlet. I got a mini canister I don't remember seeing before and a set of salt and pepper shakers that match some of the other things in my kitchen. 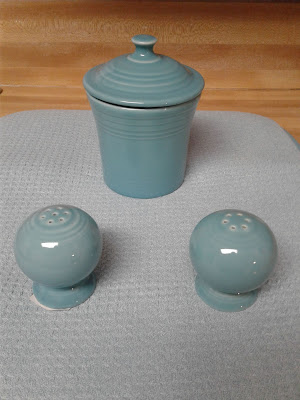 Dad didn't get a scooter to follow us around, so we didn't look for anything else while there. There were a couple of things I wanted to look for since I haven't been since I got the house. I really didn't need them anyway.

When we got home, we ate our turkey and dressing leftovers. I planned to start early in the evening on taking the rest of my Christmas tree down. It's still mostly decorated. I ended up getting sucked into answering some emails to keep the ball rolling on some things since people who haven't worked in almost two weeks were back in the office today.

When I got done with that, I got my stuff put back in the craft room and sat for two hours on the couch playing on my phone. I told Mom for some reason I was really tired today even though we hadn't done enough at Canton to be that way. I got more sleep than usual last night. But as I sit here, I feel like I am starting to get sick. I sure hope not. Ain't nobody got time for that.

True to my goal of trying to be a better blogger, here I am finishing this up.

I'm giving myself two hours to try to get the rest of the decorations off my tree and boxed up. Hopefully I can get the tree down and in it's box too. However, I doubt I will get the 15 strings of Christmas lights from the tree bundled up.

That other goal of being in bed by midnight is looming. The rest of my day hasn't gone as planned, so...