What Are You Doing to Hold Back the Forces of Evil? 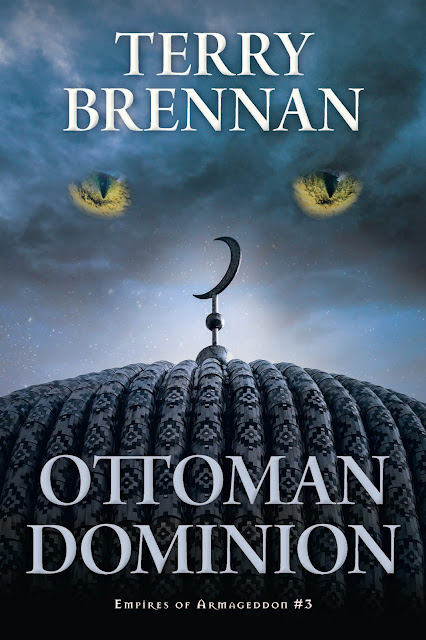 When Diplomatic Security Service Special Agent Brian Mullaney received his new assignment to protect the newly appointed US ambassador to Israel and what he thought was an insignificant box, he ended up with more responsibility than he could ever imagine. Inside the box was a messianic prophecy about the fate of the world that a dark enemy and the forces of evil at his command were determined to destroy. Not only that, agents of three ancient empires have launched covert operations to secure nuclear weapons, in direct defiance of the startling peace treaty Israel and its Arab neighbors have signed—the Ishmael Covenant. Mullaney and the ambassador have been targeted, and it’s up to him to thwart an arms race.

Mullaney has survived an explosion, being shot, and losing his best friend. He’s had enough and wants out. In Terry Brennan’s Ottoman Dominion (Kregel Publications/November 17, 2020/ISBN: 9780825445323/$15.99), the last installment of the Empires of Armageddon trilogy, Mullaney has been drawn against his will into a dangerous international mission with world-ending implications—and his final assignment is going to pit him directly against the terrifying, evil entity known only as the Turk.

“The closer Brian Mullaney gets to hunting down the murderous thugs who have engaged in a reign of terror, and the closer Ambassador Joseph Cleveland gets to unmasking a traitor in the highest echelons of the State Department, the closer they both come to falling under the dark power of the evil incarnate who lurks in their path and lusts after their souls,” Brennan reveals.

When the Turk’s minions breach the US embassy in Israel and the American ambassador disappears, Mullaney has no choice. He must accept his role as the final guardian of the mysterious box, his only weapon against the powers of darkness bent on preventing the second coming of the Messiah, no matter who or what they annihilate to accomplish their goal. Can this man who has already lost so much find the strength and faith to save the world—and fulfill the prophecy of peace?

Brennan believes readers of Ishmael Covenant and Persian Betrayal will be surprised by how the series ends. “There are cliff-hangers at the end of the first two novels of the series, and I wanted to be faithful to the first two in completing the third. So, while I believe the ending of Ottoman Dominion will bring about a satisfactory conclusion to both the novel and the series, I would be very surprised if any of the readers are able to predict the ending. I didn’t figure it out myself until halfway through writing the third book.”

In the back of each book in the Empires of Armageddon series, Brennan includes an “Author’s Notes” section that outlines the aspects of the story based in historical fact. From details about the prophecy of the Vilna Gaon (one of the key inspirations for the series) to the background of the Diplomatic Security Service, readers will gain greater insight into the depths of the story.

The final volume of the Empires of Armageddon trilogy will have fans of Joel Rosenberg, Ronie Kendig, and Frank Peretti on the edge of their seats up to the final page. But even more than an action-packed tale of international intrigue, there is something else that Brennan hopes readers find in these pages. While we aren’t likely to face forces of evil quite like Brian Mullaney does, Brennan stresses, “Spiritual warfare is real. Evil is real. And they are both present on this earth today. But, in order for there to be a tangible and ongoing spiritual conflict, good must also be real. The result of this battle between good and evil, evidence of which we can often see around us, is far more than ‘good wins.’ The result that matters is where did we stand? What did I do in my life to hold back the forces of evil? Because we are not ordained to be observers. We are enlisted to be warriors.”

Learn more about Ottoman Dominion and the entire Empires of Armageddon series at www.terrybrennanauthor.com, and sign up for exclusive emails with bonuses for series readers.

Praise for the Empires of Armageddon Series

“A fantastic combination of thriller, historical conspiracy, biblical prophecy, and Middle Eastern complexity—and you’re never sure where the line is drawn between fact and fiction.”

“This roller-coaster thrill ride will keep readers breathless all the way to a nail-biting cliff-hanger. . . . Please don’t keep us waiting for the final resolution of this exciting thriller trilogy!”

Terry Brennan is the award-winning author of The Sacred Cipher, The Brotherhood Conspiracy, and The Aleppo Code, the three books in The Jerusalem Prophecies series. His latest series is Empires of Armageddon, which includes Ishmael Covenant, Persian Betrayal, and Ottoman Dominion.