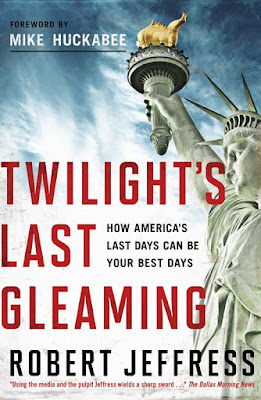 Economic chaos, spiraling immorality, cultural decay, terrorism and global upheaval have convinced many that we are living in the twilight days of America. Widely respected pastor, author and frequent media commentator Dr. Robert Jeffress agrees, but is quick to add a note of hope and challenge in his latest release, Twilight’s Last Gleaming (Worthy Publishing, January 2012). Although we cannot prevent America’s eventual demise, he asserts, we can postpone it . . . and make a difference for eternity at the same time.

Including a foreword by former governor Mike Huckabee, Twilight’s Last Gleaming offers a bold roadmap to guide readers’ attitudes and actions in these volatile times. “But it is not all doom and gloom,” writes Jeffress. “We have an unprecedented opportunity within our current culture to delay our country’s ultimate dissolution so that we can continue to grow the kingdom. Even if America’s best days are behind her, for American Christians, this can and should be our shining moment.”

The remarkable society whose light once shone as a beacon to the world is dimming. This is the sobering assessment of Robert Jeffress in Twilight’s Last Gleaming, yet he brings with that diagnosis a remarkably redemptive and hope-filled prescription for American believers. With biblical insight and real-world clarity, Jeffress answers for everyone who wonders what can be done right now—within our culture, our churches, our voting booths and our neighborhoods—to hold off America’s ensuing demise. He points a way out of the malaise, calling believers to action—not to restore a fading empire’s glory, but to make an eternal impact on millions of souls.

In Twilight’s Last Gleaming, Jeffress also devotes an entire chapter to a pressing issue on many Americans’ minds: Who should I vote for in the coming presidential election? “If Christians place pragmatism above principle, we may or may not win the election, but we will lose our soul,” states Jeffress. However, Jeffress also suggests that a candidate’s faith is just one issue to consider when voting. Jeffress asserts, “There’s some value to having a non-Christian like Mitt Romney who embraces biblical principles, rather than a professing Christian like Barack Obama who embraces unbiblical principles.” He proposes four questions that every believer should ask himself before selecting a candidate:

With a graceful balance between passivism and extreme activism, Jeffress challenges Christians to be “salt” and “light” in a decaying and darkening culture, standing up against the tide of evil that threatens to engulf America. “We cannot predict God’s ultimate judgment, but we can delay it just like Jonah’s obedience did at Nineveh,” says Jeffress. “But the reason that we’re trying to bide time for our country and prevent its premature decay is not so that we can turn America around, but so that we can preach the Good News.”

Dr. Robert Jeffress, a popular guest commentator on top network news shows, is pastor of the 11,000-member First Baptist Church in Dallas and host of Pathway to Victory, which is heard daily on over 720 radio stations nationwide, including the Salem Radio Network, American Family Radio and Bott Radio Network.

Bloggers can request a copy by filling out the form below: