January 05, 2013
Today, Paige, Peyton and I had a shopping day out. We all had gift cards burning holes in our pockets. I went through mine better than they went through theirs.

Peyton and I got some Starbucks.

I bought a little lamp and vase at Cracker Barrel which took out that card.

Then we met Rakia for burgers at a new place called Scrumbsous. I am not sure if I spelled that right, but it has crumb in it. I am sure the pies were great but we ate too much burgers and sweet potato fries and onion rings between us. And it was a great visit.

Found mom a calendar for 75% off at Mardels of the same brand she wanted.

I used my Hobby Lobby card for yarn. No surprise. The girls found 50% off frames. Much like my mom said about Brian and I when we were young, I should not have fed them. I thought they were going to break everything in the store.

We went to Justice at the mall where Taylor Swift music was playing and so help me I will never ever ever get the song out of my head. I refused to let Peyton pay $25 for an iPod cover and go through all the rest of her money.

Then there was an incident in Target where Peyton hip checked Paige to make her land on a futon. Instead she splayed out hard in an aisle. I know it hurt, but Peyton didn't mean to get her as hard as she did. I laughed. And it was payback for my bruise from the slug bug punches I had endured.

By this time, they had worn me out! Paige had to buy us a round at Sonic on the way home, but that is a whole other story.

Here is photo of the day. They have been getting along better lately and showed their love in the aisles of Hobby Lobby. 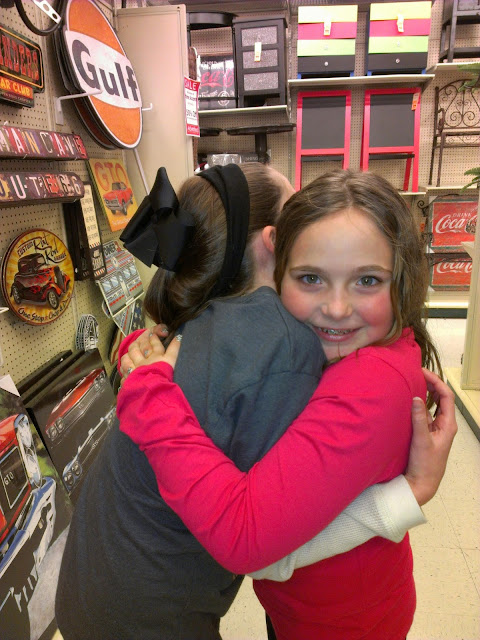