One way to finance my future home

January 10, 2013
It will still be another year before a bank will think about loaning me money to buy a house since I am technically contract labor. This annoys the living daylights out of me given days like today and the battle of the Christmas tree.

Short version: Neighbors put out Christmas tree for the trash truck to pick up. It wasn't picked up because the normal trash truck does not do that. This would be ok except for the fact they put it ON MY SIDEWALK. My dad came over, but it in middle of their sidewalk. Then, they got home and put it back by their empty trash can just inches from my sidewalk. I also had to pick up the trash cans out of the street of two other neighbors since they were blocking the way for the mail truck. I would have left them had I not been expecting something in the mail today. At least today wasn't raining, so I needed the mail to come. On rainy days, the box leaks and would have ruined my shipment from Shutterfly.

Anyway, to finance my way to another rentalhood (as a means of escape sooner rather than later), preferably a house with my own driveway, sidewalk and mailbox, I'm going to sell crocheted projects. I say that tongue-in-cheek because I'm going to have to crochet a whole lot of stuff to make a dent. And sometimes I'm quick and sometimes I'm not.

These were my first sell, and I do have another "order". 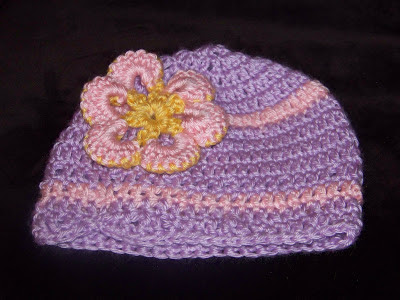 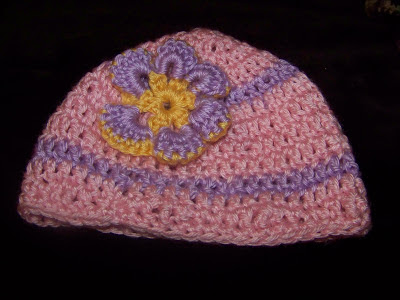 I wish I had a picture of the big sister wearing hers. She couldn't fit it over her hair last night, but I could tell she was excited to try it on. 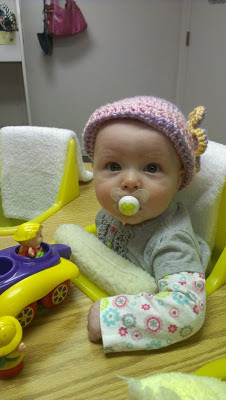 I do have two afghan projects started that I plan on selling when they are finished. Problem is, I started both probably 8 months ago, but haven't gotten back to them for other gifts back-to-back-to-back.

Right now, I'm also working on what has become the slowest-moving gift ever. I can't figure out why this particular baby blanket is going so slow. I know it has to do with the yarn I bought, but it's going to drive me crazy if it doesn't start growing faster! It's a simple pattern, it's just slow going. To me it looks bigger in the picture than it is.