How to make my latest dish -- the right and wrong ways

January 29, 2013
As I was saying last night, I was going to post a step-by-step demonstration of making a really easy dessert. So, I'll do that, just as I was going to, then you can see where I went wrong.

Sometimes the recipes I pull up on Pinterest are hits (the 8 Can Taco Soup) while others are misses (we must never speak of potato soup again).

I made this "cobbler" once before and decided a week or so ago I wanted to do it again. That's becuase I put some fruit in a pie crust that needed to be used and it was too runny in a crust.

There are only 4 ingredients, and supposedly it is Weight Watchers friendly since I consumed a massively high calorie, mega sugar infused Starbucks Frappachino over the weekend. I'm trying to be better.

(By the way, just say no to Vanilla Spice, especially when the spice is cardamom. Had I known cardamom was a cousin to ginger, I wouldn't have ordered it in the first place. But, as usual, I digress.)

All you need is two bags of frozen fruit (any variety of your choice or both the same), a box of yellow cake mix and a Diet Sprite (or 7-Up or Zero vs. Diet).

You use frozen fruit rather than fresh so that in the oven it will thaw, then bake rather than get over- cooked while the cake mix cooks. 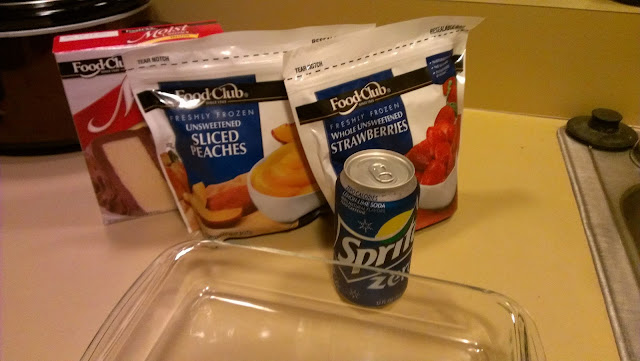 Go ahead and turn your oven on 350 degrees. You'll be cooking it for 35 minutes.

Please ignore my old oven. My mom voices her disdain for the old beat-up
looking stove/oven every time she is in my kitchen. 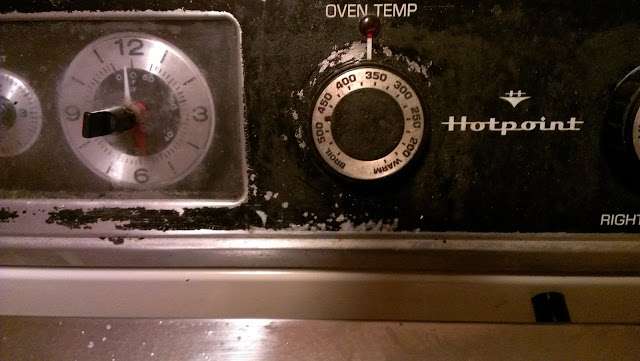 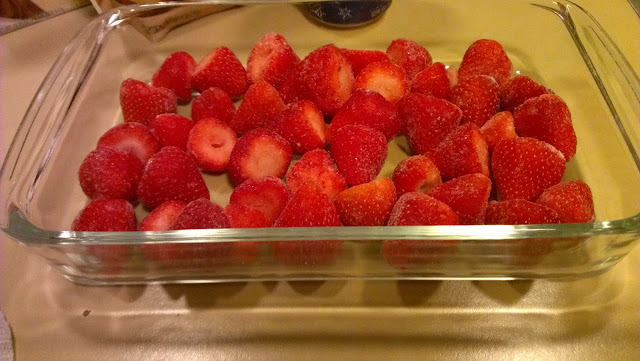 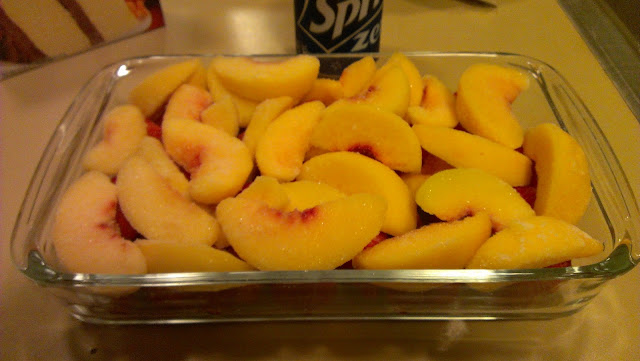 I had some blueberries left, so I threw those on top for a bonus. 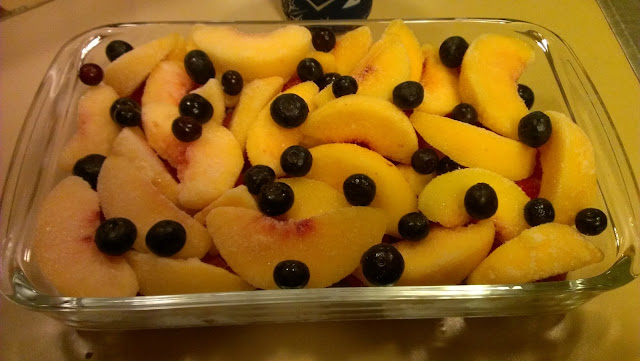 Then, pour the dry cake mix across the top. (Don't add any ingredients to the mix.)

And realize before I did that the dish I got out to use was really too small for the ingredients.
That way you won't end up dumping cake mix all over your counter. 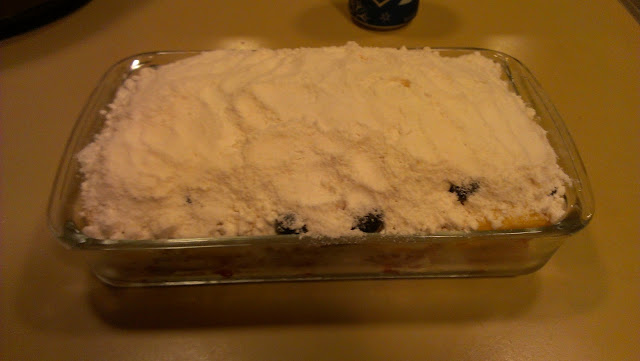 Pour the can of Sprite Zero evenly over the cake mix.

Try to get as much of the mix wet as you can, otherwise, you'll have some powdery
spots that won't cook well, and the powdered cake mix doesn't taste so good.

The Sprite will sink into the mix and create a crunchy top layer.

That's all true unless you have too small of a dish and the Sprite just runs down the mountain of
cake mix and has a chemical reaction similar to that of the volcano you made in 3rd grade.

Then, you have half of your can of Sprite running all over the place, and your cake mix not covered. 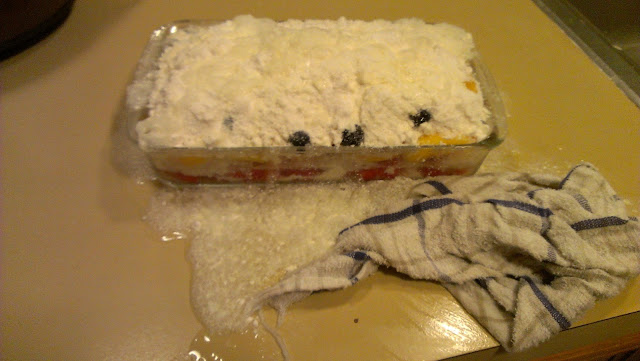 That's all you have to do! Now, put it in the oven for 35 minutes and you'll have a wonderful smelling
kitchen and a yummy desert! So simple, but so good.

Well, you would if you didn't have a mess all over your kitchen.

At this point, you dig for something you can dump this mess into. If you had a bigger cake pan
instead of a casserole dish, you wouldn't have had this problem in the first place.
(I made it at my parents' house last time.)

Then, your roasting pan has a permanent burn spot in the bottom where BBQ sauce burned,
and you don't want to put it in that. So, you end up with a big pot.

When you dump everything in, your cake mix ends up on the bottom instead of on the top.
When it is on the bottom, it can get mushy because of all the fruit juice when it cooks.

Also, what cold Sprite did get in the dish has made its way to the bottom and your entire
layer of strawberries at the bottom has stuck together, so you have to pry them apart.

You also know that you left half of the Sprite on the counter running off everywhere, so you have
to add some more in because you know you have dry mix in the bottom. But, you have to get
just the right amount so you aren't soupy. 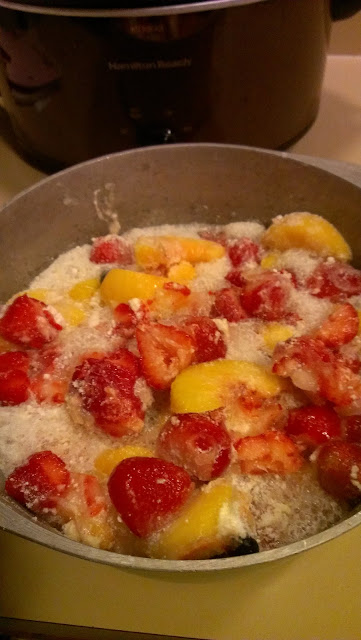 After 35 minutes, the house smells wonderful. You get your dessert out of the oven. 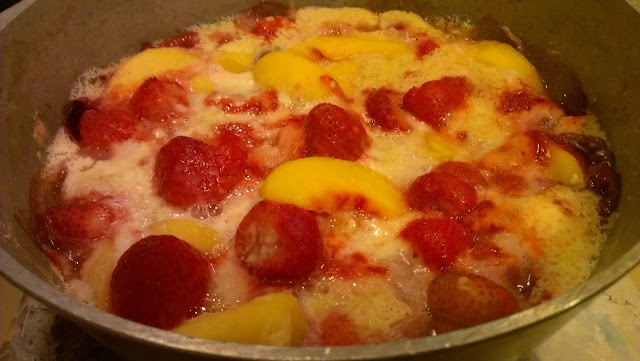 Then, you realize when you go to scoop some out that the Sprite and cake mix never mixed.

So, you stir all of it up, until everything is mixed together.

You stick it back in the oven until it bakes together.

Now, when you take it out of the oven, the top isn't a golden brown. It's all the fruit colors mixed-up. 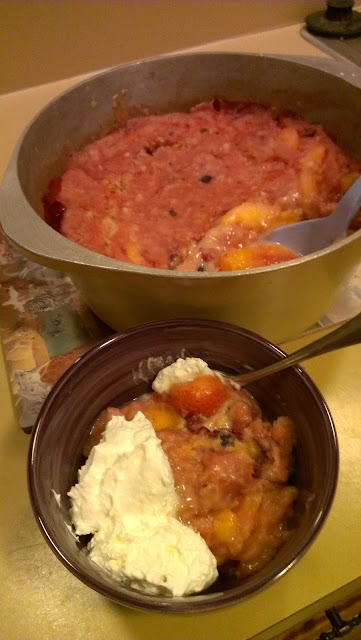 And instead of being crispy on top, it's more like a bread pudding texture.

It tastes really good with a dollop of Fat Free Cool Whip on top.

The problem is, you hate the texture of bread pudding.

You're going to eat it anyway because it is so much more edible than the potato soup.

Plus, you aren't going to waste the money you spent on the frozen fruit and throw it away.

Ally Jones said…
Just awesome! I too hate the texture of bread pudding, but I have heard of the sprite and cake mix combo before.