What's the strangest thing your parents ever fed you?

January 02, 2013
I took a late lunch today so that I could pick up something at my parents house once their mail arrived. Then, I had to run errands, so I didn't get to finish actually eating anything until almost 3:00.

"You want to come back over later? I'm making wienie casserole."

"You know Dad, I didn't eat lunch until late with my running around, and well, I just don't think you're going to get me back out for that."

Wienie casserole was a common meal when I was growing up. What's in it you ask? A big bowl of mashed potatoes (actual potatoes or out of a box - I've had it both ways which may be a sadder commentary) with cut up wienies (oh, I'm sure I've had it the chicken wienie rather than all beef franks before) and American cheese slices melted on top.

I should have gone over there, just to make a picture if it the picture of the day.

It's not quite as disgusting as it sounds. Evidently, the deal was that my dad was hungry for mashed potatoes.

Growing up when money was tight, I know all of us must have eaten some strange or less than yummy things.

To this day, I don't eat mustard unless it's on a corn dog. Except when I eat a mustard sandwich (mustard and bread) with homemade stew. That's evidently some kind of family tradition.

Here's another one that's kind of gross that came up recently. When I was up at my grandmother's house for book club, someone brought canned pear halves with chocolate cream cheese and chocolate chips. (They were kind of different.) Anyway, someone there got to talking and said their mom used to fix canned pears with mayonnaise (or Miracle Whip in my family) and grated cheese. However, this was considered funeral food because her mom always made them for funerals, never for the family to eat. In my case, I might have preferred my mom taking them elsewhere when she fixed them for us.

I was telling mom about this, and she brought up some salad her grandmother used to make, and that she fed us on occasion with iceberg lettuce, pineapple, and cherries from a jar. I remember hating it because I remember the fruit not being drained and it was really watery lettuce.

Speaking of salads I could do without, a family favorite was called "5 Cup Salad". A cup of Mandarin oranges, pineapple, coconut, sour cream and marshmallows. I like some of those ingredients with different things, but not all together. If marshmallows weren't bad enough on their own, soaked in juicy sour cream... Gag.

So, I want to know, what kind of strange recipes does your family have?

And this photo has nothing to do with any of this, but it's my January 2 picture. The past couple of nights have been glowing purple as the sun sat. And it wasn't just the light reflecting into my purple office. It was just a little more blue than the picture shows, but I like the purple of course. 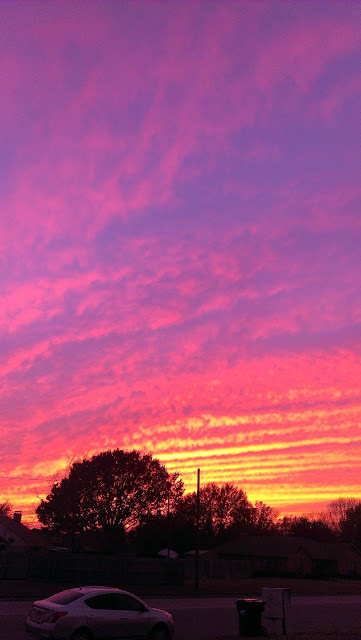