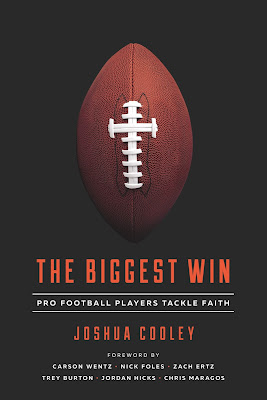 This past February, the Philadelphia Eagles weaved the football-loving world an incredible tale, culminating with an exciting Super Bowl win against the New England Patriots that has left the city with lingering feelings of pride.

But nearly a year earlier, Joshua Cooley, one of the premier Christian sportswriters in the country, was invited to write a freelance story about the faith of a group of NFL players who were playing for more than gridiron glory. Their story, their faith and their desire to glorify God while playing the game they loved turned into a new book that gives sports-minded readers hope and direction for living out their faith while competing.

The Biggest Win, published by New Growth Press (July 30), gives athletes and sports fans of all ages a unique, insider’s look into the lives and faith of six Christian NFL players from the 2017 Philadelphia Eagles Super Bowl team—Carson Wentz, Nick Foles, Zach Ertz, Trey Burton, Jordan Hicks and Chris Maragos. Through the ups and downs of their experiences, Cooley shows how these high-profile athletes remain committed to God’s Word, genuine Christian discipleship and sharing their faith.

Cooley said that when he received an invitation to write a freelance story about a group of Philadelphia Eagles players who were uncommonly devoted to seeking God’s Word together, he was intrigued. What he discovered in writing the profiles was that there was much more to be told.

“These guys weren’t perfect, nor did they claim to be,” Cooley said. “But I was immediately struck by their unquenchable hunger for Scripture and their commitment to genuine Christian discipleship, accountability, and obedience to Great Commission living. Rarely, if ever, have I spoken to a group of professional athletes so committed to pursuing biblical truth together. Soon, I realized there was a much larger story to tell. Since creation, God’s marvelous plan of redemption has been moving toward ultimate fulfillment. And amazingly, he allows athletic competition—enjoyed by billions of humans worldwide—to be one of many catalysts for spiritual growth. This book is a humble effort to examine this fascinating topic.”

The Eagles’ amazing 2017 season—culminating in a 41–33 victory over the New England Patriots in Super Bowl LII and providing the 85-year-old franchise with its first-ever Super Bowl title—was a wonderful blessing for these Christ-following players. The historic championship afforded them a much bigger platform to do what every great Christian athlete does—deflect glory toward their Creator.

“In The Biggest Win, we draw upon the experiential wisdom of these elite players, but we won’t idolize them,” Cooley added. “They are remarkable athletes with outsized salaries and fame that most of us will never know. But they are no better or worse than anyone else—a fact they happily admit. They are some of the most humble, likable professional athletes I’ve ever encountered. They are sinners saved by grace, just like all believers.”

The joint foreword to The Biggest Win from the six Super Bowl Champion players reinforce Cooley’s hope for the book.

“We love football,” they shared. “We love what we do. But football is just a game. And one day we will retire from football. But becoming a follower of Jesus Christ means our identity doesn’t have to be in our latest performance on the field—our identity is in Christ. Following Jesus means that our purpose is larger than being the best athlete. We have a whole new life of meaning, purpose, and service that will last longer than our football careers and have more impact in the world than anything we could accomplish on the field.”

The Biggest Win combines biblical truths with practical direction on issues that every Christian faces, including dealing with adversity, competition, change, success, failure, and how to thrive by faith in a pressurized world. Encouraging male and female athletes in any sport, The Biggest Win guides them in finding their ultimate identity in Christ, not their athletic achievements, and assures them that their greatest prize is eternal life.

A percentage of the book sales from The Biggest Win will go to the Fellowship of Christian Athletes, a nearly 65-year-old international sports ministry with a vision to see the world transformed by Jesus Christ through the influence of coaches and athletes.