We did a three-hour event tonight because we thought we'd give it a shot. It was at a school that's awesome in the fall. They were combining two events, after all.

Well, I know why they combined them. They would have been absolutely nothing on their own. The Gollywhopper Games (as the event was called) were a total waste.

So much for busting my butt to get a few things done ahead of time. None of those were one of the four items we sold.

I did end up with Nate's Cake (I even bought a mini cake) and a couple of art prints in the silent auction. At least they made money off of me.

I saw this for Angie, and it screamed her name. 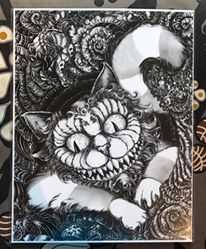