The most perfect weather for a Ranger game 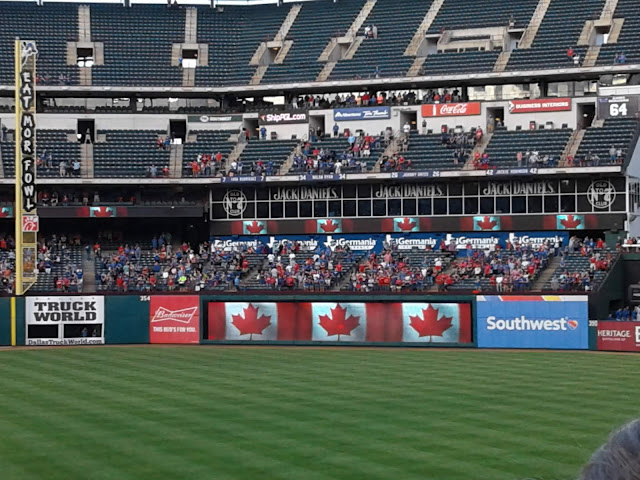 No, I didn't head to Toronto for a baseball game although I really do want to go and see a game there. The Blue Jays are in town this weekend. I took this photo during the singing of "O, Canada."

(Random story: When my brother and I played RBI Baseball on the Nintendo as kids, I would pick the Blue Jays as my team just to make him listen to both national anthems before the game.)

When I got my Opening Day tickets, I had to buy for another game. In addition to those two tickets, I bought two more so Mom and my friend, Rachel, could go with Dad and I.

However, Dad's hasn't felt well and his knee is killing him, so Rachel and I had to find someone to buy the other tickets. One of her co-workers and her co-worker's mom were able to go.

I don't know that I've ever gone and had nicer weather. Usually it gets hot, but it was so nice. The perfect temperature, whatever it was. The Canadians siblings in front of us may have thought it was downright warm, but they live in Alberta, the land of snow.

Oh, and the best part, the Rangers won and actually went 1-2-3 in the 9th. This season, it's a downright miracle. Everyone in my group except me got up for a pit stop, and I was left there at the end gathering up everyone's stuff. They sure didn't think it would be over so quick.

Another side note: It was Bark at the Park night. Thankfully all the dogs were on the other side of the park. I just think that whole thing is a terrible idea for more reasons than one, and not just because I'm allergic. I about lost it when I found out it was dog night. At least they weren't barking and pacing right behind me.
Texas Rangers Toronto Blue Jays