Telling the Truth, Even When it’s Unpopular 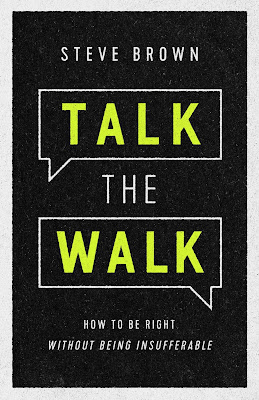 Part 2 of an interview with Steve Brown,
Author of Talk the Walk: How to Be Right without Being Insufferable


The Christian faith is true, and while we may be right on issues of salvation and theology, we may miss the less articulated truths of humility, love, and forgiveness. We live in a culture that is increasingly hostile to Christians and their faith. Talk the Walk (New Growth Press) by pastor and author Steve Brown unpacks the call to “go out into the world” and share faith by being truthful and winsome. By helping men and women love others out of a deeper love in Christ—the one who first loved us—Talk the Walk helps Christians present the gospel clearly and with compassion.

Brown encourages readers to:
This attitude-altering book invites Christians to cultivate boldness and humility in communicating gospel truth. By uncovering self-righteousness and spiritual arrogance, Talk the Walk shatters stereotypes and helps believers consider how they present the good news without watering it down.

Q: Why can’t we all agree on truth?

When one is referencing the disagreement on truth claims between Christians and unbelievers, it has to do with how one sees truth. A meta-narrative is a narrative at the heart of all that is, explaining all that is. The Christian faith is a stable (and true) meta-narrative, and we live in a culture that rejects all meta-narratives. In other words, there isn’t any such thing. If one decides to be “good,” for instance, one must ask, “Why is good, good?” If there’s no meta-narrative (no God), then good is what one decides is good and everything is up for grabs.

But then there are a lot of places where Christians disagree among themselves about certain truths. In this book, I’ve tried to avoid those areas of disagreement and center in on what C. S. Lewis called mere Christianity (a term he got from Richard Baxter, a seventeenth-century English Puritan church leader and theologian), referring to the basics of the Christian faith as expressed in, for instance, the Apostles’ Creed. The Evangelical Presbyterian motto is quite good: “In Essentials, Unity. In Non-Essentials, Liberty. In All Things, Charity.” That works for me.

Q: What do you mean when you say, “We are right and they are wrong”? Why is it dangerous to be right?

I mean that we are right and they are wrong . . . but certainly not that we are right about everything and they are wrong about everything. In fact, they may be more right than we are, and we could be more wrong than they are. But in terms of the eternal verities of the Christian faith (again, mere Christianity), we really are right and those who disagree are wrong. If I didn’t believe that, I would not have written this book, and I would have gone into vinyl repair where it didn’t matter. Not only that, if Christopher Hitchens in his book God Is Not Great didn’t believe he was right and Christians wrong, he would not have written his book either. The difference is I really am right and he really is wrong, and now he knows it. That’s not arrogance; it’s the nature of truth. Aristotle’s principle of non-contradiction—that contradictory propositions cannot both be true—is helpful to remember.

The Christian faith is either right or wrong. If it’s right, it’s the best news the world has ever heard. If it’s wrong, it doesn’t matter. We don’t say that very often because it gives offense. But it needs to be remembered and said often. 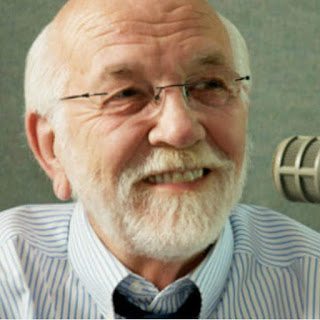 Q: When is it appropriate to be quiet?

When Barry Goldwater ran for president, he had the unfortunate habit of being controversial in the wrong places. For instance, he would sometimes campaign in Florida and speak against Social Security and in Tennessee speak against the TVA (Tennessee Valley Authority). One of Goldwater’s senator friends said to him, “Barry, I know you have to walk through the field where the bull resides, but you don’t have to wave a red flag in his face every time you do.” That would be good advice for Christians. We don’t have to die on every hill, fight in every battle, and correct every error. Frankly, we’re not that good or wise. Silence really is golden, especially when words are so often used to manipulate and demean others, to gain power, or to protect “our castle.” Sometimes silence is its own witness.

That doesn’t mean Christians should not speak truth. It does mean, however, some truths are more important than others. Christians should pick their battles very carefully when talking to unbelievers, and those battles should rarely be battles over partisan politics, social mores or minor theological propositions. Frankly, unbelievers don’t care about how many angels can stand on the head of a pin or which political position is anointed by God. Forgiveness, love and redemption should be shouted from the rooftops, but some subjects should be relegated to the basement.

Q: How can we confidently speak the truth without coming off as arrogant or self-righteous?

I hate to keep bringing up the subject, but truth isn’t the problem. It’s the speaker of that truth. One time, the late Swiss Christian physician/psychiatrist Paul Tournier was asked if he knew Christians who didn’t live their faith. “Of course I do,” he replied. “Me.” The way one speaks truth without coming off as arrogant or self-righteous is not to be arrogant and self-righteous. If the Bible is true (and I have good reasons to believe it is), when we bring our witness to the world, get baptized or join the church, we’re making a public announcement about our sin, neediness and lostness. That reality doesn’t dissipate on the good side of our witness, our baptism or our church membership.

A dangerous prayer is the Psalmist’s prayer (Psalm 139), “Search me, O God, and know my heart . . . see if there be any grievous way in me.” That is a prayer God almost always answers, and it should be prayed before we ever try to speak truth to those who don’t want to hear.

There’s an old story of a young man applying for a job. When the man entered the owner’s office, he was working on some papers and said, “Take a chair. I’ll be with you in a minute.” “Sir,” the young man said, “I’m the son of Senator Smith.” “Then,” the boss said, “take two chairs.”

Q: We hear the phrase “speak the truth in love” often, but are there things we are misunderstanding about love that result in not speaking the truth well?

I wrote a chapter on love for this book, but it turned out to be a lot different than I thought. I found out I didn’t have the foggiest idea of what love was. And you don’t either. Passages such as 1 Corinthians 13 are “checklists” describing what love does, not what it is. I know about the different Greek words for love, but that doesn’t help either. As a matter of fact, love happens. When Supreme Court Justice Potter Stewart described obscenity as something he couldn’t define but knew when he saw it, he could have been describing love. Love can’t be fixed, controlled, manufactured or earned. It comes from being loved unconditionally, deeply and without reservation (something you know when it happens), and it’s the key to our witness to unbelievers. One can’t love until one has been loved and then only to the degree to which one has been loved. We are called to practice love at church (no mean thing); and then, when we get that right, to go out into an unloving world and become instruments whereby the world experiences it. They will know it too, when they experience it.

I think we sometimes talk about love too much. We preach too many sermons, write too many books and pontificate too often. Love really does happen, and it happens when Christians hang out with Jesus. In fact, the solution to most of the problems we have with ourselves and with the world is to just go to Jesus and then not leave until we’ve been loved. You’ll know, and they will too.

Q: How do we, as Christians, create questions in the minds of unbelievers?

By doing the unexpected. Martin Luther, for instance, gave some advice to a pastor friend that was helpful. He pointed out that certain things were very irritating to the very religious. He told his friend to find out what they were and then to “do them.” I’m sure Luther would put some boundaries on that advice, but not much. Our subculture has created a list of laws that would make an Orthodox rabbi blush. There are so many “do’s” and “don’ts” that it’s intimidating. The truth is most of those are not from the God of the Bible but from our own efforts to be better and better every day and in every way. Transformation is no longer being increasingly like Jesus but becoming increasingly more religious.

So, to create questions, Christians need to break out of that mold, push the line and shock the world. We do that by loving the wrong people, going to the wrong places, quoting the wrong writers and cutting slack for the unrepentant, and it goes on and on. I have a friend who has Bible studies for strippers and another friend who is straight who goes to gay bars to hang out. You wouldn’t believe the questions.

I think it’s important for Christians to figure out where in their own lives the comfort zone is . . . and then to go one step further.