Back to the question, "How did I get so lucky?"

Because my post got so long last night, I'm continuing on with my story now. Back to the story of Kim's wedding:


My mom feels that there may be hope for me to eventually marry because, after all, Kim didn't get married until she was in her 40s. She and her husband Jeff had lived together for a while, and finally decided to make it official. Why she didn't do it while her mother was living, I don't know. So anyway, they decided to just go ahead and do it in Vegas.

Jenny and I arrived at the wedding chapel before any of my family arrived. Every time someone drove up, Jenny would ask, "do you know them?"

"No, Jenny, my cousin is not the slut in the mini-shorts and four inch hills with the fake boobs."

"No, Jenny, my family is not Scottish, and I'm pretty sure there is no way on God's Green Earth that Jeff would be wearing a kilt."
Interesting people get married in Vegas.

So, finally, I recognize, or rather hear some family, so we go in one of the chapel doors. Part of the family had arrived. The bride and groom, along with a couple of their friends were late to their own wedding because evidently, the limo driver who should have known better didn't arrive in time to get them from the Mandalay Bay, all the way down the strip, to the chapel in time.

While we were waiting for Kim and Jeff to show, Jenny and I conversed with my cousin Mark (Kim's brother), his third wife Meredith, Aunt Carol and her manfriend, Bill. Out on the sign at the chapel, it says that you can watch weddings live online. Mark told Jenny and I that if he had known that, he would have stayed home. I think he was just joking. While Jenny and I were chatting it up with Mark on one side, Carol, Bill and Meredith were living it up on the other. If you readers think that I am loud, I inherited it from my even louder Aunt Carol. A very dominant personality. Only to be outdone by Meredith (I think Mark was even shaking his head at her) and the King of Knowing-it-All, Bill.

Carol was asking Jenny and I what we had been doing while I was out in Vegas. We told them about driving out to the Grand Canyon the day before so that I could go out on the glass bridge (can you say overrated?). Bill adds all of his vast knowledge that was not quite accurate to the conversation. Finally Carol informed him that he did not know it ALL because I had just been out there and probably actually knew more than he did. (Carol's first husband was quite opinionated too.) It did not take too long for all of us to have quite our fill of Bill. A little Bill went a long way.

Finally, the bride and groom arrived with their friends Hazel and "Pancho" (I don't know what his real name was because Jeff kept calling him "Pancho"). The only reason why I bring up this couple is because they were married at this same chapel several years before. Their wedding was delayed because they had to wait for Dennis Rodman and Carmen Electra to finish their ceremony. Strange, but true random fact. And you do know how I love random facts.

After the wedding, all 10 of us head back to the Mandalay Bay for dinner at the House of Blues. Jenny and I met up with them for dinner after they went upstairs to the club for the wedding toast. They evidently had quite the toast up there because they came down well on their way to being drunk.

Then, they all ordered more drinks and got more drunk. Jenny and I went with Diet Coke and observed all the others. At one point, I got out my camera, and Jeff about had a cow. "Don't take a picture of my beer bottles. I don't want your parents seeing a picture of my beer bottles." I find this hilarious because the man is in his 40's, and is worried about what my Dad is going to think. My dad's not stupid. Kim and Jeff have been living together (not secretly), are getting married in Vegas (Sin City), and he's worried there might be a picture of him and a beer bottle? 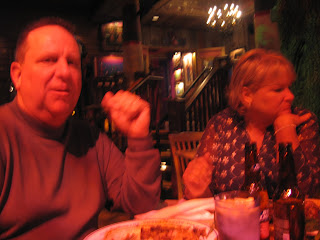 I know that most people are pretty stupid when they are drunk, but I think even more so with my family. Let's just say that Jenny and I cannot talk about the whole experience without referring to "Drunk Aunt Carol". Jenny and I cannot talk about my family without referring to "Drunk Aunt Carol". I forgot about this until I looked in my scrapbook, but during the course of dinner, Jeff had to give Carol his jacket because she was cold, and Bill says, "no one wants me taking off my shirt."

You have that right Bill. You certainly have that right. And Bill and Meredith debating at dinner was quite fascinating to Jenny. You really had to be there.

It wasn't a bad time, but just a really rather interesting with my drunk family. Jenny and I talked about them all the way back to her apartment.

So, on this invitation to Carol's casual dress wedding at the golf course, the schedule for the night reads:

I am not much of a party goer, but I know that a Par-Tee is a like a PAR-TAY!!! In addition to the former wedding with drunk family members, I have been to other parties of drunk family members, and it is very not enjoyable. It's just simply, not my thing. I don't really think I should go.

I left Jenny a message earlier asking if she wanted to be my date to "Drunk Aunt Carol" and Bill's wedding. She called back later, and immediately said, "yes!" I can assure you, she was joking.

So, back to my question. Knowing all this back story now. "How did I get so lucky?"

My dad didn't see the mail. I thought he had when I said, "Mom told me I got some mail." He was in middle of something at the time, and didn't know what I was talking about, I realized later. I think I'll probably pass on telling him about my invitation. Mom can have that discussion if she would like to.

Even if this tremendously long story was not funny to you, you have to admit this picture is. Do you think these two are related? It's a picture of my cousin Kim and our "Drunk Aunt Carol". Look at how they have their mouths. 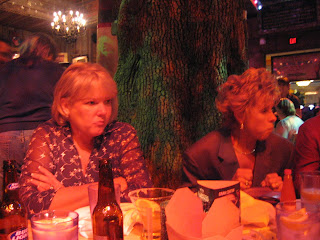 Posted by Audra Jennings at 9:04 AM