My family reunion was full of hot air

April 27, 2013
Today was the now annual family reunion for my dad's side of the family. We actually survived without any drama.

(Oh, except the one time my dad yelled at me about something for no reason. Still don't know what that was all about. And one somewhat unexpected member of the family that I did avoid. We won't go there either.)

My uncle (whose house this was at) evidently tried it out the night before. Wish I could have seen that. It wasn't the crazy male members of the family that did it though I was trying to convince some of my cousins. Surprisingly, it was the women  (two of my cousins around my parents age, one of my dad's cousins in her 70s, another of his cousins, my sister-in-law Julie, two or three cousins' wives) I admit to sliding 3 times. The first time because Paige begged, the second time because a cousin decided she was going again even though it was risking breaking something before a two week trip to Italy, and a third time because Layton wanted me to go down with him. I need to get that picture from Mom.

Layton decided he wanted to stay and slide more, so I said I would take him home if Julie needed to leave. He fell asleep in my car less than a mile away when we left. All that sliding wore him out. I needed a nap when I got home too. 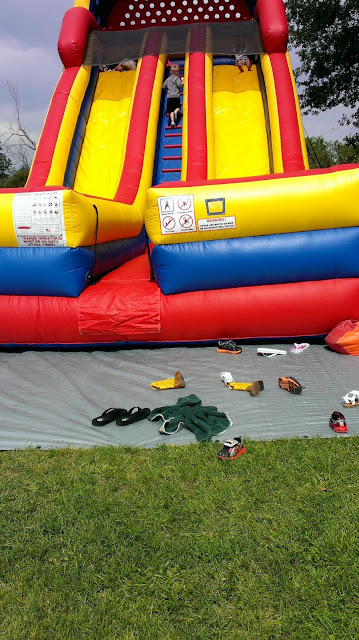 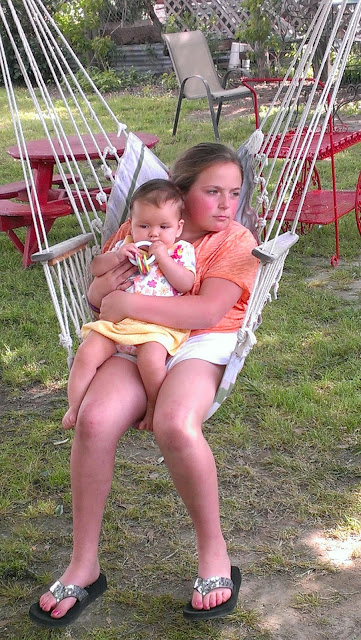 I just liked this pic of Peyton and my cousin Wes' daughter Abigail. They were about ready to nap together. Peyton is at the age where she wants to get ahold of all the babies. I think she almost drove Chris' daughter Meadow crazy.
family reunion