Sometimes Sunday naps are a necessity rather than a luxury

April 14, 2013
After a night with the bulldozer (see yesterday's post), and making cinnamon sugar almonds, King Ranch casserole, corn casserole, Cherry Pineapple Dump Cake, and brownies, plus straightening up the house, having a party, then staying up late talking to Rakia past midnight, I was exhausted going to bed last night. However, I'm not sleeping well in the new bed that was delivered on Monday. At all.

My parents came over for leftovers after church, and once I cleaned up most of the kitchen, I felt like a zombie. I needed my nap so terribly bad. Not a "I'd like to take a nap." It was "I have to take a nap." For over two hours.

I know we all say it every weekend, but anyone else with me on needing one more day before getting back to the never ending to do list tomorrow?

Since the beginning of February, it's been all about packing, moving, unpacking, painting, hanging up pictures and curtains, going out of town shopping for stuff for the house, cleaning, putting in some work hours knowing I'd be out of the office most of a day, going to Houston for Opening Night, straightening up the house, cooking for guests, I am ready to do absolutely nothing next weekend.

I've spent enough money. The ugly bathroom wallpaper will not kill me hanging on the wall for another week. If anyone stops by, my house will just be in whatever disarray it may be in. My office is not going to be painted anytime soon because I still don't know what I want to do up there.

Next weekend is about sleep. Possibly crocheting a project I started months ago. Maybe working on my Shutterfly scrapbook project of my vacation from last July. Yeah. I really need to work on that.

Thank goodness I have next weekend, because the whole next Saturday will be a family reunion which includes people my parents found on Ancestry.com. It also involves a water slide. But, you have to wait two weeks to hear about that.

Until then, I have to try not to devour all these almonds since I have a lot of leftover desserts. They look good, don't they? They don't look quite like the picture I found on Pinterest because the coating isn't as hard. I don't know if I'd make them again because it would be a heckuva lot easier to just buy some. If you want the recipe, comment blow.

I'd include a link to the recipe, but Pinterest has blocked the link for possibly questionable materials such as nudity. Uh. When I printed the recipe in December, it wasn't an inappropriate site... And no, I will not ship you any. ;) 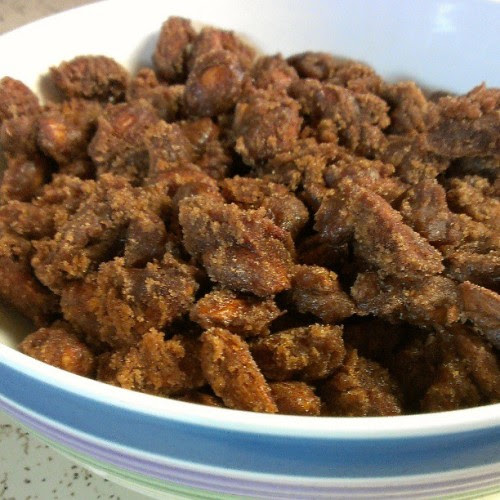