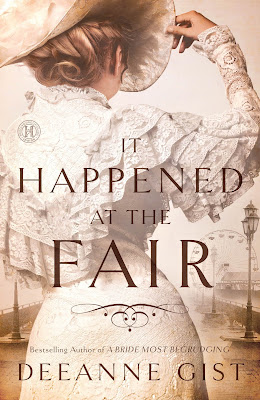 “Gist takes intriguing historical facts and creates a world of fascinating characters, lighthearted moments and timeless crises that we can still relate to today.” –Romantic Times Top Pick (A Bride in the Bargain)

The 1893 Chicago World’s Fair overflowed with the latest innovations welcomed by a throng of people from all around the globe. This setting replete with history, intrigue and wonder is the backdrop for beloved author Deeanne Gist’s latest release, It Happened at the Fair.

“I’m always drawn to events in our country’s past that are strangely absent from our history classes. Why the 1893 World’s Columbian Exposition has been left out, I don’t know, especially since it was such a pivotal event for us,” explains Gist. “We were able to wow the world with our scientific innovations; and it gave women their first official board position recognized and approved by an Act of Congress (all before we had the right to vote). But it was technology which claimed the day as it nipped at the heels of horses, buggies, and man-powered tools.”

With every book topping bestseller charts since her acclaimed debut A Bride Most Begrudging, Deeanne Gist has sold over a half million copies, earning rave reviews and numerous awards, including back-to-back Christy Awards, four RITA nominations, National Readers Choice, and Book Buyers Best. With her trademark humor and rich historical detail, It Happened at the Fair is sure to delight her beloved fans as well as garner new ones.

Gambling everything, including the family farm, young inventor Cullen McNamara is determined to make his family proud—and earn his father’s entry money to the Fair Expo back—by selling his design for an automatic sprinkler system inspired by his mother’s death in a mill fire. Struggling with hearing loss from his previous life on the farm, McNamara finds it difficult to communicate with potential buyers over the din in the Fair’s Machinery Building. In an act of desperation, he hires attractive Della Wentworth, a teacher of the deaf, to tutor him in the art of lip-reading.

Much like the newly invented Ferris Wheel, Cullen is caught in a whirl between his girl back home, his dreams as an inventor, and his unexpected attraction to his new tutor. Can he keep his feet on the ground or will he be carried away?

Gist’s unique blend of romance and historical fiction brings the past alive for her readers through her extensive period research. Readers will find themselves not only caught up with the exciting backdrop of the fair, but the blossoming love story between Cullen and Della. They will also encounter President Grover Cleveland, Alexander Graham Bell, Helen Keller, and Ann Sullivan, actually attendees of the legendary fair. 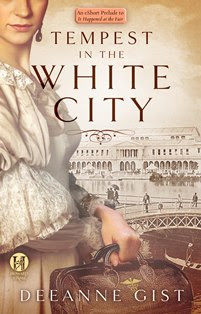 Both the paperback edition of the book as well as the e-book include actual photographs taken at the fair between each chapter. The photographs in the paperback are different from the e-book, so whichever version readers purchase, they will have exclusive content. However, Gist’s fans won’t have to wait until April 30 to get their first look at the fair. Tempest in the White City, a 40-page short story available in a digital format released on March 19 and is available for 99 cents.

Gist will be hosting a webcast event on May 22, 2013 at 8:00 PM EST, where she will be discussing more of the story behind It Happened at the Fair and answering reader questions. During the course of the evening, a number of prizes will be given away to those participating in the discussion. More details will be available soon on the author’s Facebook page, www.facebook.com/deesfriends, where the webcast will be hosted. 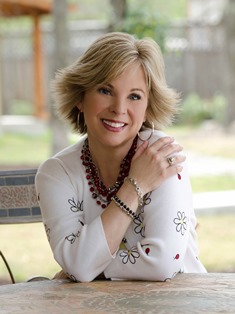 Deeanne Gist—known to her family, friends, and fans as Dee—has rocketed up the bestseller lists and captivated readers everywhere with her original historical and contemporary novels. A favorite among readers and reviewers alike, her popular titles include A Bride Most Begrudging, A Bride in the Bargain, and Maid to Match. Her latest book, It Happened at the Fair (releasing April 2013), is her ninth published novel.

A popular speaker, Gist’s presentations have been featured on the front page of the Wall Street Journal and in other publications. The Wall Street Journal’s accompanying online video was the most watched video on the FrontPageWSJ.com website for several days following their feature.

Gist has a background in education and journalism. Her credits include People, Parents, Parenting, Family Fun, Houston Chronicle and Orlando Sentinel. She is also the creator of I Did It!®, a parenting line of products. Gist lives in Houston, Texas with her husband of thirty years. The couple has four grown children.
1893 World's Fair Chicago Columbian Exposition Deeanne Gist Howard Books It Happened at the Fair Tempest in the White City