Why I love my backyard

April 28, 2013
I'm far from an outdoorsy nature person. However, I love the tree in my backyard, and mainly that I can see up in the tree from my desk.

It sure beats the view from over at the other place where I saw a busy street, the mail person driving by my mailbox, trash cans and the neighbors parking in front of my house. I guess part of the reason I am not blogging as much lately is I have less neighbor rants than I used to.

There is a flock of doves in my backyard, and I usually see a lot of blue jays and mocking birds. There's a lot of small birds too - sparrows I think - and maybe another variety. Most of the time the cardinals are out front, but I see some of those too.

I've been hearing a woodpecker, but had not seen one yet. And definitely hear an owl or two at any time of the day. I saw one fly into a tree down the block one evening after walking the neighborhood, but not in my yard.

That morning, I saw a flash of red out of the corner of my eye, and it was a woodpecker. The picture isn't great because of taking it through the screen door.

That night I was up in the office later in the day than usual and heard blue jays making a raucous. I have learned it's blue jays that are so loud when they aren't happy. I looked out to see if there was a cat or something else they were "screaming" about, and it did sound like screaming.

I finally spotted the owl in the tree. It would look right at you, and didn't mind me opening the screen doors. However, the blue jays started dive bombing him and "flew" him out of the tree. Then all the blue jays in the neighborhood started squawking. It sounded like a horror film. He's been around again, but across the street. I haven't seen him, but I've heard the other birds going nuts about it. 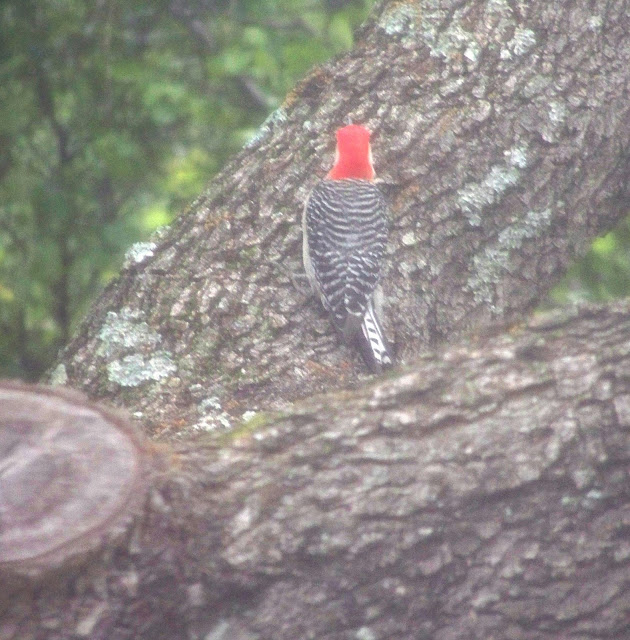 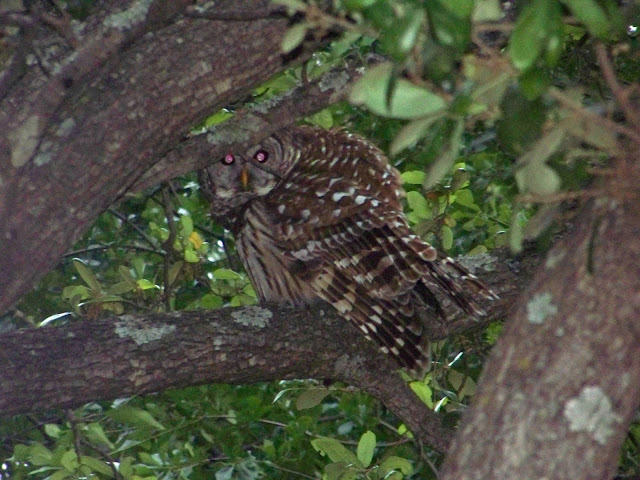