They still put on a good show

June 29, 2013
There's some phrase about insanity and repetition. I'm pretty sure that proof of my insanity is evident that I've been to four New Kids on the Block concerts. Four. But to my defense, that's over the course of 23 years.

Ok, fine, yes, three of them were in the past five years.

They still put on a really, really good show. And the same friend has gone with me to all four. The first time we had to have an adult go, and the second time another friend went with us, but this is our thing. We go in solidarity. It's our guilty pleasure, and we love it.

This time around, they are touring with Boyz II Men and 98*. What I didn't know is that the concert would only be those three groups with absolutely no other lame opening acts. Who knew? I left town about 15 minutes after I intended, and we waited for what we thought was a little too long for our food at the restaurant. Yes, the tickets said 7:30, but we didn't get there until 8. It was a Friday night concert at American Airlines Center.  I don't know the last time I went to a concert in a venue like that where there wasn't a lame opening act - someone you've never heard before and most certainly will here again.

So we were surprised that when we got in, all the security guards and the few men in the building were mouthing the words to "Motown Philly."

Sidetrack moment... You have to realize at a concert like this that at least 95% of the attendees are women (and the men are the ones who will do anything for their wives, including grudgingly attend a NKOTB concert), so they turn all the men's rooms into women's restrooms and the men have to stand in line one at a time the family restrooms. I have a friend whose husband bought her tickets and was there. He was having a hard time finding a men's room.

As we got to our seats, Boyz II Men were literally running off the stage. We missed their whole set. Who knew? 98* came out immediately. As in no lights coming up in the venue. Talk about efficiency!
I was a bit disappointed, but more surprised than anything. Some of my other friends that were there said they were awesome. That's too bad because I would have traded some of the time I saw 98*.

I was in college when 98* had their day in the spotlight. I wasn't in to any bands at that point. Yes, I knew some of their songs, but they either all sound alike or have "do re me fa sooooooo" in them. Literally. And dorky. I was trying to get a picture of Nick Lachey on the big screen and got Drew again. If it weren't for Dancing With the Stars, I'd know nothing about Drew Lachey. Drew does have some moves!

I thought they just had 3 members, but there were 4. And looking at one of the guys in the group today, I can't figure how he ever made the cut for a boy band. Not a looker. He at least did not hold up that well. 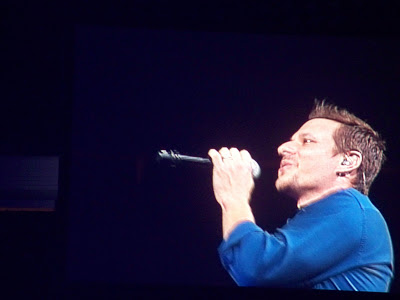 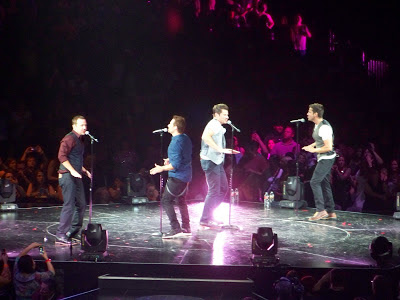 At 9:00 on the dot, NKOTB was on stage and did a full two hours. We got our money's worth with a good show. Very entertaining.

Not sure what's up with Donnie Wahlberg's new glasses though. It's like they add another element to his personality. My mom watches Blue Bloods and just can't picture his as a singer. He's completely different live than on the show. He's so mellow on the show. She just doesn't understand. "Did he sing last night?" she asked. Uh, yeah Mom.

Some of them are holding up better for being between 40-44 than others. Man, we're all getting old. 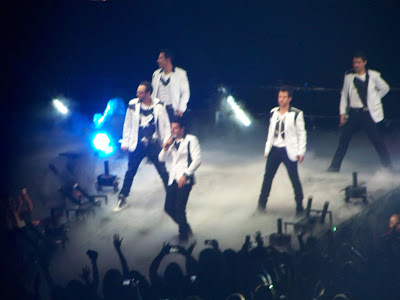 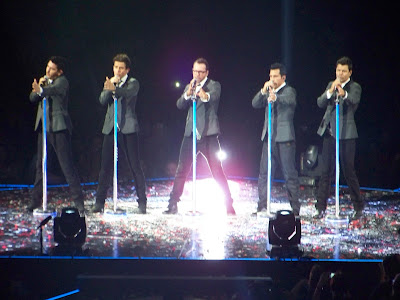 With their rotating stage with lifts, it's amazing how they can get the stage transported for shows on consecutive nights with all of the pieces without it falling apart. It's things like this that have me in awe. 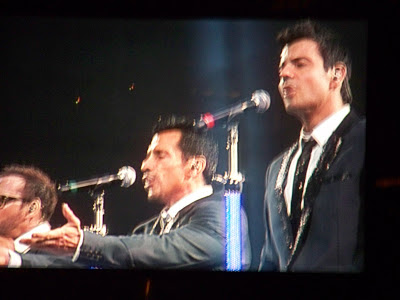 When we left the building, their buses were right outside. We decided we'd hang out a few minutes and see if we could catch a glimpse. There were a good number of people waiting around (we were right up front in the crowd), but more waiting down on the other end. Some of the people around us were convinced they saw Jon running around. I have my doubts about that. 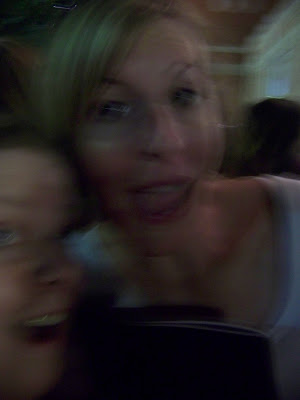 We finally gave up and headed home. But Jenny says next time we're going to see them afterwards. I guess that means there will be a 5th time.
98 Degrees Blue Bloods Boyz II Men Donnie Wahlberg Drew Lachey New Kids on the Block Nick Lachey The View