In the meantime, here's an interview
with Nicole O’Dell,
Author of Hot Buttons 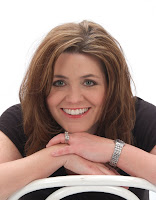 Q: You are a mom of six. Did the idea for the Hot Buttons series come from your own experiences in talking to your children?

I was searching for ways to lead my children to make good decisions and decided it would be far better to talk to them proactively about issues they would one day face, than it would be to wait until they were buried under poor choices. I believed it would be easier to control the way they perceived the information and easier to help them see and understand the consequences of poor decisions if they could look at it objectively, without the added stress of peer pressure and other outside influences. This relaxed and safe way of approaching the issues has been invaluable in preparing my own kids for the pressure they’d soon face, and the added benefit of open and honest discussion has brought us closer together.

Q: How do you decide the right age to discuss these hot buttons with your child? Should you talk about all of these issues about the same time, or do some come earlier than others?

Long ago, I decided it would be far better to talk to my kids pro-actively about issues they would face one day than to wait until they were buried under poor choices, like I was in my own teen years.
I knew that if I had any hope of being as proactive as I wanted to be, I’d have to be willing to talk about the hard things like sex, drugs, alcohol, suicide, bullying, modesty, pornography, and more, perhaps even before they actually knew what those things were. No subject could be off-limits and nothing could be ignored.

With that as a goal, conversations are always happening. Parents don’t need to wait until the issue comes up. In fact, it’s better if they don’t. No, not everything needs to be covered at once, but something should always be on the table. Shine the light and crowd out the darkness.

Q: What is an appropriate age for teens to start dating? Are there any variables to be considered?

Every teenager is different, so I hesitate to give an exact age. In Hot Buttons: Dating Edition, I outline several benchmarks for parents to look for as well as questions to ask themselves and their teenager before deciding whether or not it’s a good time to allow dating. Parents need to be prepared to make that age different for each of their kids, if necessary. It’s about readiness, not perceived fairness.

Q: How early do parents need to be talking to their children about sexuality?

2? 3? Honestly, sexuality and issues related to it should be on parents' minds from the time their kids are toddlers. Hanging back and waiting for the all-important sex talk as the launching point misses very important opportunities to develop self-awareness in kids. They need to be pointed toward a healthy marriage from a very early age so they have their sights set fully on what God has for them--even if they can't put it into words yet. Modeling a godly lifestyle, answering questions, and having intentional, age-appropriate conversations from the very beginning are vital. By the time kids are ten, you can be sure they've started to grasp some of the finer points of sex and their own sexuality. This is when deeper and more specific conversations should be tackled.

Q: What signs should parents watch for if they suspect their teen of using drugs?

They can be sudden, glaring changes that scream for your help, or they can be subtle trends that creep in slowly like a sinister fog. If you’re not observant, the fog will overtake your teen.

The symptoms fall into three categories: emotional, behavioral, and spiritual.

Specific emotional changes that can signal drug use include:

Q: How closely should parents monitor their children’s online activities? What are some of the things parents can do to keep their children safe?

It’s not necessarily their fault when they stumble onto something risky. So it’s our job as parents to protect our kids. I have a few rules in my house that exist no matter what—even with the most trustworthy kids. It doesn’t really matter how much you trust them because when entering the WWW, they are exposed to an entire world of people and things that they don’t know how to avoid or why they should.

1.       Parental controls on computers to protect from dangerous websites that open the door to dangerous things like pornography and connections with strangers.
2.       Time limits on computer use.
3.       Internet access only in public areas of the home.
4.       Access via a shared password to every account a teen has (email, social media, etc.)

Q: Honestly, if parents don’t talk to their teens about the difficult topics such as dating and sex, where do they expect their teens to get information in order to make good decisions?

Sadly, I see a lot of parents who are clearly just hoping to make it through the teen years. Their hands-off approach leaves a teenager to wade through the doubt, confusion, peer pressure, and temptation all alone. And no teenager is equipped to do that in a healthy way. Without Mom and Dad taking charge, friends, the media, and anything else with a voice will take over.

Q: Why is it so important for parents to talk to pre-teens and teenagers about choices?

If I look at all to the major struggles I’ve had in my life, troubles I’ve caused, mistakes I’ve made…they can all be traced back to a moment of choice. Do it, or don’t? At that moment, when a decision is made, it sets a pattern of activity into action and you can’t go back to the moment before that choice—big or small—was made.

Thankfully, we serve a big God who is in the business of forgiveness and restoration. Even though it would obviously be better to have made the right choices in the beginning, when we do make mistakes, He’ll pick up the pieces and put our messes back together.
And, while ultimately it's a simple process because God's already done the work, it doesn't come naturally to human beings to deny self gratification and choose the right path. And when mistakes are made, it's not always easy accept grace and forgiveness. So, the goal is that we, as parents, will teach our kids about that process before the choices are presented.

Learn more about Nicole O’Dell and her books and Choose NOW podcasts at www.nicoleodell.com. She has special sections set up for both teens and parents. Readers can also keep up with her via Facebook and Twitter.
dating drugs Hot Buttons internet Kregel Nicole O'Dell parenting sexuality Teens