November 27, 2012
To celebrate the release of Resurrect, David E. Stevens has teamed up with his publisher, Kregel Publications, for a Kindle Fire Giveaway and Facebook Author Chat Party {12/4}.

One "thrilling" winner will receive:
Enter today by clicking one of the icons below. But hurry, the giveaway ends on December 3rd. Winner will be announced at the "Resurrect" Author Chat Facebook Party on 12/4. Connect with David, get a sneak peek of the next book in the Resurrect Trilogy, try your hand at the trivia contest, and win some great prizes—gift certificates, books and a Book Club Prize Pack (10 copies for your book club or small group)!

So grab your copy of Resurrect and join David on the evening of December 4th for a chance to connect with David and make some new friends. (If you haven't read the book - don't let that stop you from coming!)

Don't miss a moment of the fun, RSVP today.

Hope to see you on the 4th! 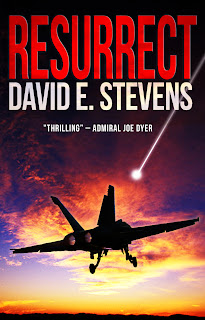 Book 1 in the Resurrect Trilogy.
Preventing his burning fighter from crashing into a neighborhood, Navy Commander Josh Logan ejects … too late.
Critically injured, he’s offered a new life and mission exploit highly classified military technology to stop a global cataclysm. The price? He’ll be dead to everyone he knows.
He wakes in a city hospital with a genetically enhanced body and no identity. With the help of his brilliant, Neuro ICU nurse, and guided by nothing but a voice, he must infiltrate the military-industrial complex to develop the world’s most powerful weapon … to protect humanity?
Purchase a copy here.
Read an excerpt.