A somewhat productive but lazy Sunday

I actually accomplished a lot between church services and my nap today.

What I did not figure out is how to melt the white bark and food coloring without it hardening instantly. I still lack the skills to become a professional chocolate dipper, but maybe my parents' friends will be impressed.

However, I finished off a crochet project and didn't take a picture of the hat. Can you believe that? I was in too big off a hurry to think about it because I was handing it off tonight. I really wanted ear flaps and a pom pom on top as a joke, but I don't have a pom pom maker and the ear flaps would have been dorky. It was probably dorky enough.

I wish you could have seen it when I tried it on. Sigh. 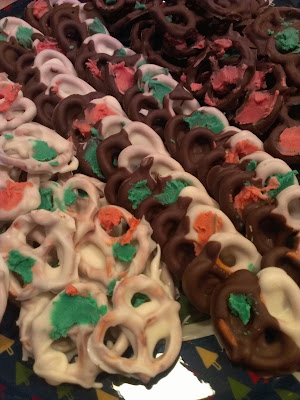